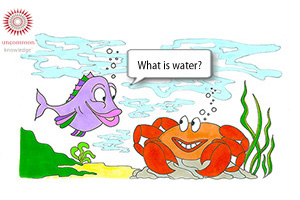 Hypnosis is so ubiquitous it's easy to miss

“I don’t believe in hypnosis!”

Robert looked satisfied and smug, as though he’d just rested his case by dropping it squarely on my toes. Clearly, he wasn’t one to be bamboozled with superstitious nonsense.

The house party had been in full swing and Robert, seeing a giant pair of ears (aka me) started making one way conversation. During a narrow crack of silence I’d made the mistake of telling him I “did hypnosis” to which he’d proudly thrown in his trump card: “I don’t believe in hypnosis”.

I could have pointed him to our free eBook on the research into hypnosis, but I had a sneaking suspicion my efforts would be fruitless. Instead, I asked him whether he believed in the unconscious mind. Beaming, he proclaimed, “No! I believe in common sense and logic.”

I was tempted to ask…

And how, I wondered, would he explain why ex-servicemen and women experience horrendous flashbacks to wartime trauma, or why shy people blush when the social spotlight shines their way? Would he have tried to argue that these are conscious decisions?

I wanted to take the bait. I wanted to wipe the smugness from his face. I wanted to say that not just a little, but most of our behaviour is driven by unconscious processes.

Every second, our five senses take in an estimated eleven million pieces of information. We know this because scientists (yes, scientists!) have painstakingly counted the receptor cells on each sense organ and the nerves that connect them to the brain.

Yet we can only consciously process about forty bits of information a second. What this means is that large parts of our experience are unavoidably unconscious.

So did I regale him thus?

Well, no. That particular axe was ground blunt early in my career. I left the bait hanging and instead asked him to talk about what he did for a living. I listened (well, sort of) for what felt like the longest ten minutes of my life to a detailed description of his accountancy practice. Even as his mouth moved, his words seemed to fall away, and my thoughts drifted…

An unintentional and ironic induction

As Robert droned, I entered a kind of trance. I forgot to pay attention to him as my focus wandered inward. If he’d been paying attention I’m sure he would have noticed my cataleptic glassy-eyed expression – but he was probably too absorbed in his own story!

Boredom is a kind of hypnotic technique. Indeed, it was occasionally used by the great Dr Milton Erickson, especially for ‘straight-line thinkers’. When we deem that there is little for us ‘on the outside’, our attention strays inward.

This kind of disassociation and abstraction is key to the hypnosis we experience on an everyday basis. And it happens so often, and feels so familiar, that most people wouldn’t even recognise it as hypnotic.

Wishing and hoping and dreaming… and counselling

When you dream at night you disassociate from your bed to the point where you forget all about it. You are completely absorbed by whatever hypnotic scenario your brain conjures for you, as your imagination goes into overdrive. We don’t think of this as deep hypnosis, but that’s exactly what it is.

Hypnosis is a state of abstraction in which the conscious mind becomes less dominant and the powerful unconscious mind is more directly accessed. The unconscious mind is responsible for emotional reactions, immune functionality, physical healing, and the creation and maintenance of high-performance states such as ‘flow’.

As soon as a person becomes even slightly abstracted, as soon as their attention is split, they enter an hypnotic state. And, though you may not be aware of it, it probably happens to you every day!

Have you ever been wandering around the mall and found that some piece of music triggered a memory? This is a kind of everyday post-hypnotic suggestion. You become less focused on the shops and more focused on a memory that had, until the music triggered it, been buried deep in your unconscious.

When this happens, your attention is split. This splitting occurs naturally. Hypnotherapists are trained to spot it happening and use this kind of natural trance as a gateway to deeper hypnotic experiences, if that’s indicated.

The same thing is happening when you dream at night or enter a deep hypnotic trance during a formal induction: your attention becomes split. And you become naturally more open to suggestion.

On learning and being suggestible

During hypnosis you become more open to learning, more suggestible. Unless a counsellor has their client totally focused on the present time and place, the client is probably abstracted to some extent: their attention is split. All you have to do is ask someone to focus on the past or imagine the future and you are inviting them to split their focus from the here and now. You are inviting them into trance.

Just as storytellers hypnotise their audience, people can also take themselves into a trance state when they tell their own stories. Especially if it’s about something highly emotional.

Emotions narrow and fixate our consciousness and are therefore inherently hypnotic. This naturally occurring trance is such an important concept in psychotherapy, yet so many practising therapists don’t understand it.

When someone in therapy is asked to focus their attention, of course part of them still knows they are in the counsellor’s office. But if they’ve been asked to talk or think about a painful event such as a recent divorce or a childhood humiliation, part of them may also be experiencing that pain in a very real sense. Their attention is split, and a kind of trance has been established.

To maximise the benefit of the inevitable trance states that occur during any kind of therapy, the therapist needs to know how suggestible their client becomes during these trance states.

But perhaps even more importantly, the therapist needs to know how to make sure these trance states don’t end up causing more pain.

During trance we develop unconscious associations that act like naturally occurring post-hypnotic triggers. Unless the therapist understands this basic psychological principle and knows how to use it, therapy may cause problems for their client.

Post-hypnotic response happening all the time

Hypnosis is a natural process, and it happens naturally – not just when it is induced by a hypnotherapist or stage hypnotist. Life is hypnotic.

I worked with a woman who would feel nauseous every time she went to the hospital where she had received (nausea-inducing) chemotherapy. She would feel like vomiting the minute she stepped through the front door, even though she was now perfectly well.

Association isn’t conscious, but it is powerful. Another woman told me how she had felt after receiving a year of ‘therapy’ from a therapist who had encouraged her to repeatedly focus on the pain in her life:

“After a while just sitting in his room made me feel tearful, before we even started talking. It’s like the chair, his face, even the time of day I went to see him would automatically trigger me feeling anxious and upset.”

Did that therapist understand the power of naturally occurring post-hypnotic association? Hardly. I bet he would have sworn he wasn’t doing hypnosis with his client.

There’s no such thing as hypnotherapy… or is there?

It’s only when you as a therapist know how to use naturally occurring hypnotic states that the hypnotic self, this central part of what it means to be human, is no longer accidentally activated but purposefully utilised for therapeutic gain.

Personally, I’m not quite ready to make the term hypnotherapy obsolete! But I’m careful about how I use it.

This is something all therapists and communicators need to understand. This is also why going to see a well-trained hypnotherapist may be the best therapy you can have.

Suddenly, my thoughts snapped back to the present.

The diminishing power of CBT

Perhaps sensing my abstraction, Robert broke into my thoughts. At last, he seemed to be trying to appeal to something he thought I might be interested in.

“I read today that Cognitive Behavioural Therapy has become less effective than before. That it’s about half as effective for treating depression as it used to be.”(1)

Shaking myself from my reverie, I agreed. That did seem to be the consensus.

Depression has a lot to do with expectation, which is almost always negative for depressed people. Hope is so important in overcoming depression, which is one reason depression is so responsive to placebo.(2)

Robert seemed mildly interested, but it didn’t last. As the conversation drifted back to spreadsheets and tax returns, I sunk once more into the depths of my own musings…

Early on, the success of CBT seemed to rest partly on its reputation and the hype that surrounded it. But as time went on, the novelty wore off and so did the placebo effect. In this context, the benefit of the placebo is about the focus it creates – a hypnotically engendered state of unconscious expectation.

Expectation plays such a critical role in human experience, from misery to happiness. That’s why therapeutic presuppositions are part and parcel of modern hypnotic training: because they help shape positive expectation.

So if expectation is such a large part of CBT’s efficacy, why aren’t all CBT practitioners trained to use and engender that expectation, just as hypnotherapists are? It all comes down to the widespread lack of understanding when it comes to hypnosis and hypnotherapy.

Hypnotherapy is often described as a complementary therapy, but I have to question that description. Hypnosis happens naturally in all therapies and, in the cases of CBT and antidepressant medication, may actually be the main active ingredient.

Far from being ‘complementary’, hypnotherapy is central to the experience of human change and development.

A hypnotherapist is simply a psychotherapist who understands and uses this central aspect of human psychology. And in so doing, they open up the possibility of treating physical pain, nightmares, PTSD, depression, panic, anger, and even addiction – because these conditions are all at least partly hypnotic in nature.

They all focus the mind narrowly and produce unconsciously conditioned responses.

Hypnosis is not a therapy in itself; it’s a natural state of mind that can be harnessed by well trained or naturally gifted practitioners to produce powerful healing effects.

In short (though I don’t think I bothered trying to tell this to Robert!):

As hypnotherapists we are working with an important and often overlooked part of the human being. Hypnosis doesn’t have to be obvious. It doesn’t even have to be intentional! But it needs to be understood, and it needs to be harnessed for benefit.

I let my consciousness come back to the room and found Robert still contentedly chatting away. Though I bore no malice, it was time to interrupt.

“I don’t believe in accountancy!” I said bluntly.

As he backed away from me he looked stunned… almost hypnotised.

To learn hypnotic techniques you can blend into your therapy, counselling or coaching approaches, take a look at our online Uncommon Hypnotherapy course.