Back to Top
Mark Tyrrell's Therapy Skills » Anxiety Treatment » Why Are We All So Scared?

In a world dominated by fear, how can you (and your clients) avoid the spiral of anxiety? 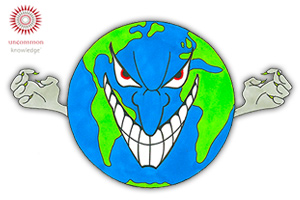 Bad news spreads faster than good news, and this can make the world seem like a scary place

Are we living in an age of fear? Is worry and anxiety, angst and disquietude, and a pervading sense of vulnerability and personal powerlessness becoming the norm?

Could it be because anxiety is being peddled furiously by an increasingly attention-desperate media and in turn harming the wellbeing of millions?

Or is the nature of modern living intrinsically anxiogenic?

“I know something’s wrong, but what?!”

The symptoms of generalized anxiety manifest as a sense that bad stuff is happening or about to happen. It’s becoming increasingly common, I suspect, to feel that something is very wrong, but to have no distinct sense of what that something is.

But of course, that’s only the beginning. GAD makes us focus on specific and real problems too. The distorting lens of generalized fear magnifies particular problems such that we worry deeply, often about things that wouldn’t normally bother us. In fact, catastrophizing is a symptom of all anxiety conditions. But, at the risk of spreading more fear, it gets worse.

Fear and tension coupled with a sense of hopelessness are a recipe for depression(1). Depression is essentially a pervasive feeling of exhaustion and hopelessness brought about by an extended fear response against which the sufferer feels powerless.

Just look at how widespread depression has become, especially in younger people. The incidence of depression in teenagers has risen by 70% in the past 25 years. The number of children and young people presenting to Accident and Emergency with a psychiatric condition has more than doubled since 2009(2).

So why the increase?

Well, evidence certainly suggests that unhappiness (and happiness), obesity, divorce, and smoking (and smoking cessation) can all spread on social networks(3). Unfortunately our understanding of social emotional contagion is still limited, but it has an undeniable impact.

In industrialized countries we are all more connected, for better or for worse, than ever before. But it’s not just traditional social networks that impact our wellbeing.

Every media source is vying for our attention, and there’s one sure-fire way to get it.

Put it this way: if you want to capture someone’s focus, use bad – or, better still, terrifying – news. The ancient mechanism of fear evolved to grab your attention in a snap. In fact, in the presence of terror, even that oh-so-wonderfully powerful sex drive will vanish, faster than a British Politician after an EU referendum.

Even if your day-to-day life doesn’t involve true fight-or-flight situations, you’re not immune to the sense of threat. Threat is, in a sense, in the air. Ready to engulf you at any moment.

There are so many media outlets fighting to bring you news or ideas before you get them elsewhere. And what better way to capture your attention than to trigger your anxiety.

But at what personal cost?

When it’s an emergency, you shout (or scream!)

With a new horrific event unfolding in the world every day, it’s becoming harder and harder to find a reason to hope. At the risk of making this sound like a scare story (a scare story about scare stories!), constant background scare stories in the news can have an almost subliminal effect on us.

The tap-tap, drip-drip of 24/7 news media is enough to make the world seem like some sort of insane beast, hell-bent on our destruction. Violence and horror that should feel exceptional comes to feel like the norm. But we need to remember that news is only news because it is not the norm.

If you want to alert someone in a crowd to a threat you don’t gently nudge them on the shoulder – you scream “Danger!” in their ear. This is just what the media does – it presents the news to us for maximum effect, no matter how badly it’s frying our nerves!

Today I read that a massive earthquake is about to hit South America, which will have repercussions for the whole world. And there’s nothing for us to do but wait in fear – earthquakes are notoriously hard to predict. I also saw a headline relating to a nuclear war threat, and a sensationalistic article asserting that over a million of us may be living with undiagnosed lung and heart conditions.

I’m really not sure what I can do about any of this. Even if you don’t purposefully consume the news, or try to avoid it, scare stories can spread in other ways – social media, or just the guy you know who tells you grimly: “Did you hear about…?”

Unremittingly bleak and scary world representations can lead many of us to develop a generalized sense of foreboding and doom. Just as our moods and ideas can be shaped by those we interact with, so too we’re emotionally conditioned by the media that fills our lives. Cynicism about relationships, grim expectations, and perceived threats are all shaped by the mass media.

None of us are immune to this ‘media effect’, but understanding how and why it happens can help kick the ‘emotional immune system‘ into gear. Knowledge is power. It’s vital to see how the way news is presented affects us. Let me explain what I mean.

It’s long since been discovered that bad news is more effective at arousing us than good news. Bad news and threat galvanizes attention. News media know this, and they use it to garner maximum consumption by maximum numbers of people, and gain that all-important competitive edge. It’s the way threatening news stories are presented that’s really interesting.

We seem to respond more emotionally to all or nothing, black or white – simplified presentations of reality. All-or-nothing news reporting corresponds to the all-or-nothing fight-or-flight response. It’s specifically designed to stimulate a strong emotional reaction.

People who are depressed, angry, or terrified will think in terms of polarity, in extremes of all or nothing, completely this or completely that! I like to call this ’emotional thinking’ because it derives from that same fight-or-flight mechanism. News headlines shriek out this same extreme binary sense of reality.

We’re all of us presented with bad news, day after day, week after week, month after month. In times gone by if you’d been presented with that much bad news you probably wouldn’t have survived, because the bad news would have actually related to you personally.

But in today’s world we’re forced to contend with repeated bad news with no physical effect – but deep emotional effects. Never before in history have so many people been so exposed to so much bad news. There’s no way this could not affect us.

For millions of people, this constant emotional conditioning has created a sense of foreboding, and we have to assume that this is contributing to conditions such as GAD. But personal and collective development can only happen to the extent that we can live independently from this kind of mass conditioning.

Fear has a way of spreading, not just from person to person but from emotion to emotion. Fear can morph into other destructive emotions like anger, jealousy, and, when we feel helpless, depression. To quote writer Cyril Connolly:

“Hate is the consequence of fear; we fear something before we hate it; a child who fears noises becomes a man who hates noise.”

Fear must be tamed and contained. But how?

Are we being brainwashed without even knowing it?

According to Dr Graham C. L. Davey PhD, threatening news stories do negatively affect mental health. His research(5), among others’, seems to show that not only are negatively valenced news broadcasts likely to make you sadder and more anxious, they are also likely to exacerbate your own personal worries and anxieties.

Fear is a strong conditioner of belief. For some of us, this is a central tenet of how we operate – politicians spring to mind! But many of us don’t really think about it, which can leave us vulnerable. This is why an understanding of basic psychological mechanisms needs to be democratically spread within populations, in order, perhaps, for true humanity to develop.

To understand how fear conditions belief, we first need to understand one vital thing about beliefs: they don’t always have a strong and valid foundation. You believe that if you press your light switch, the light will come on.

You believe this because you know it through experience. But many beliefs exist in the absence of testing or real personal perception or experience.

Ever since The Korean War taught us the Chinese term ‘brainwashing’, we’ve known that beliefs can be engineered in people. What most of us don’t yet know is just how this happens, and how we are all vulnerable (sorry to use a fear tactic there!).

Beliefs can be engineered through a combination of fear and hope, tension and release. Our collective lack of understanding of how beliefs can be created in this way represents a major gap in our educational system and leaves us all more vulnerable to psychological abuse.

I believe all children should learn about the hidden psychological persuaders that can induce harmful beliefs and lead us to do horrible things.

So, what can be done? 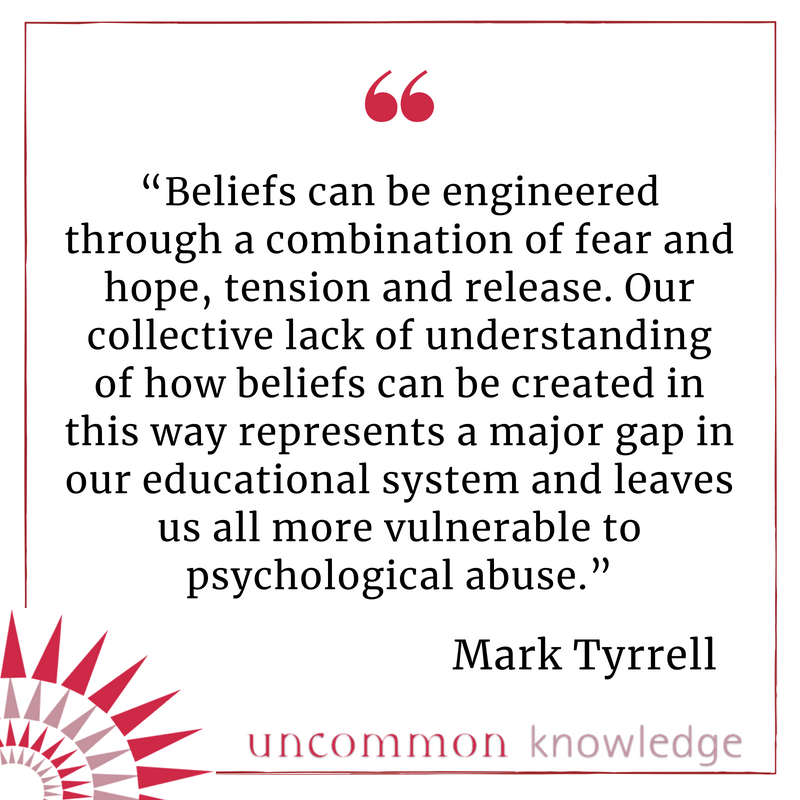 Education needs to include an understanding of the role emotional manipulation plays in shaping belief. This won’t happen, of course, if the educational system itself has a vested interest in shaping beliefs, as happens in totalitarian regimes – but also on a more subtle level in most education systems, I suspect.

World War I, that mass, industrial-scale slaughter of a generation, became known at the time as the “war to end all wars”.

Any horror can be justified through the engineering of belief. We all need to know how this happens and, at least sometimes, stand aside from the fear being peddled to us from all corners. Because fear can very quickly turn to hate.

And if you read a news headline telling you that billions of people lived in peace today or that bluebirds were seen flying over the white cliffs of Dover, please, share it! We could all use some good news.

What do you think? Is there another reason anxiety is such a problem in today’s world?