3 tips for using therapeutic paradox to help your clients, with examples 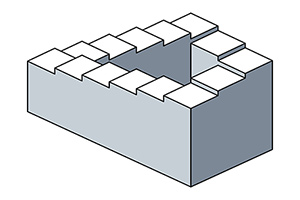 The shortest path to healing is not always the most logical

“If you try to fail, and succeed, which have you done?”

Sometimes the unexpected approach, the opposite of what seems to be best, is the very thing that helps people crack open the painful shell of limited thoughts and feelings.

Let me tell you an unlikely true story.

For fear of falling

A young woman, Sarah, came to see me. She worked as cabin crew on a well-known airline, a job that required her to be ‘on display’ to the public. But she told me she suffered from terrible self-consciousness.

She managed somehow to hide this at work, but when she was out and about in town she would become terrified.

“It sounds so stupid,” she told me, blushing a little, “but I have this terrible fear I’m going to fall over in the street, or in a store, and everyone will see and laugh at me and think I’m an idiot! I’m obsessed with this thought. It ruins everything for me!”

By the time she came to see me Sarah had started avoiding going out altogether. And she had no idea why this obsession had taken hold.

How could I help her?

How to play the fall

I went for the rational approach first, of course. But no matter how hard I tried to convince her other people surely wouldn’t laugh even if she were to fall over, she’d heard it all before and it made no difference now. So I decided to use a paradoxical approach.

I looked at her and said, “You’re telling me you really want to get over this problem; that it’s wrecking your life, right?” She agreed.

“Are you sincere about that?”

“And you would do anything to get rid of it?” She agreed to this also.

“Okay,” I said, “you’re afraid of falling over accidentally in town, right? So this is what I want you to do between now and the next time I see you. Go to the shopping mall. Choose a public spot where everyone can see you. Then fall down on purpose. Count exactly how many people laugh. Remember, this is not to be an accidental fall. Follow these instructions to the letter and you will be instantly cured.”

The psychological shock of hearing such a dramatic and unexpected instruction instantly plunged this woman into that very narrow, focused state we call ‘shock hypnosis‘. Before she knew it, and to my astonishment, she had agreed to my prescription. I felt she was a woman of integrity and I was pretty sure she wouldn’t go back on her word.

Experience is the best teacher

Sarah showed up to the next week brimming with energy. I asked her what happened.

“Well,” she said, “on Saturday I went in to town. I still thought you were crazy, asking me to do this, but I was so intrigued by the idea I couldn’t help myself. I walked up and down the mall for a whole hour before I gathered the courage to fall over. Eventually, I made myself trip and fall onto the floor, and I lay there.”

“And were you careful to count the number of people who laughed?” I asked her seriously.

“Well that was the weird thing. Nothing! No one did anything! People ignored me! They just looked away. I couldn’t believe it!”

Sarah had hit her stride now.

“In fact, I was a bit cross no one had bothered to help. So I did it again half an hour later, in the middle of the street in another part of town, and again no one did anything! People just walked by as if nothing had happened!

“So I tried again. On my third fall, an elderly lady finally came over and asked if I was all right. I was so grateful that someone had finally taken notice!”

Sarah had gone from dreading people taking notice (with the assumption they would think she was stupid) to being annoyed no one took notice. Quite a turnaround!

Sometimes, especially when we feel stuck with our clients, we might need to go off script and do something a bit different. Sometimes that intervention might seem like the last thing you should do. But consider this.

Stop being pushed and pulled around

In martial arts such as judo and jujitsu, if you are pulled you push and if you are pushed you pull. The ‘problem’ (of your opponent’s force) isn’t resisted, but rather encouraged and then directed. You now control the force of the problem.

When you feel stuck with a client, consider encouraging the problem in some way, in order to take control of it. When we use paradoxical intervention we employ the ancient art of the counterintuitive.

So what principles can we employ when we feel paradox might be the way to go?

Tip one: Stop what isn’t working

I saw a news report about a woman who managed to cut litter in her village by 40%.

How? Well, she runs a small shop, and she noticed young school children would often drop the wrappers of the sweets they bought in her shop. She tried the direct approach. She asked them not to litter.

The litter continued to mount up. She realized it was pointless to continue trying to do what wasn’t working. So she widened the context of her thinking.

Because she lived in a small village, she knew most of the names of the young children who bought from her. So she started writing the children’s names on the wrappers of the items they were buying from her.

Her discovery, apparently, was that you are much less likely to drop litter when it has your name on it. It’s amazing how responsible you feel for something when it’s labelled with your name.

She managed to cut litter by 40%, not just outside her small shop but in her whole village. She stopped doing what wasn’t working and found another unexpected doorway into the problem. In effect she was saying, “Okay, enjoy your littering, but own the consequences!”

When you’re not getting the results you want, stop what isn’t working and try something new and unexpected. Widen the way you see the problem.

Tip two: Change a part to change the whole

No, I can’t do the Rubik’s cube either, but I have noticed that if you move one part of the cube the whole pattern of the cube changes. And sometimes solutions come from zigzag rather than straight-line thinking.

When we look at the human motivations that surround a problem, rather than simply the problem itself, unexpected parts of the problem and its solution can be illuminated.

If we change something about the problem situation, rather than try to cure or solve it, the whole problem may start to unravel. This can be a great way to think about problems.

Milton Erickson would ask people to continue their lung-busting smoking or heart-crippling eating, but change some aspect of it.

So the smoker who lives in a six-storey house is asked to keep smoking for a while, but keep his lighter in the basement and his cigarettes on the top floor at all times. Suddenly the compulsion morphs into an inconvenience.

The overeater is asked to carry on eating as she likes, but to walk not drive to her nearby store. She can only carry so much, so she buys less and she walks more.

These small changes, like a single shift of the Rubik’s cube, can start derailing the whole pattern.

How can you help change the client’s problem into an inconvenience or a chore?

Sarah, as I had promised, was cured by my paradoxical task. It had taken her an hour to do what she had been terrified might happen at any second. Not being able to do something you previously felt you couldn’t help but do is a major perceptual reframe.

Later Sarah reported a happy ripple effect from this brief and paradoxical therapy. She started feeling more confident in her relationship and at work, and she even started exercising more and eating better.

When we fear something, it seems to make sense to avoid it. And often it does make sense. The act of purposefully bringing about what you fear is paradoxical. But it just might work.

By completing my paradoxical task, Sarah had replaced her imaginary scenario with a real experience.

Getting someone to consciously ‘do’ their problem turns an unconsciously generated compulsion into a conscious chore – even a wish. Had Sarah not been able to fall over, that might have been therapeutic too. She would have failed to experience what she had feared.

Asking an insomniac to try to stay awake when they are tired is a better way to get them to fall asleep than asking them to try to get some sleep.

I recall setting one woman the task of setting her alarm clock for 4 am and waking up in order to worry about her health for 10 minutes.

She had already been waking up in the small hours and frightening herself with her worries, but I asked her to do it as a conscious task and introduced the alarm clock to bring some more order to the problem.

She started ‘failing’ the task regularly. She would sleep through the alarm, or she would fail to fully focus on her worries for those 10 minutes as her mind wandered to non-worry topics.

She was succeeding at failing! (I refer you to George Carlin’s quote at the head of this article.)

Now I’m not suggesting that you necessarily do stuff as dramatic and ‘crazy’ as what I’ve mentioned here. But we can use paradox in small ways too.

If someone is convinced they can’t relax, we might ask them not to relax while we talk to them about how other people relax. We are ‘prescribing the problem’. The pressure is off them now, but we are talking calmly and using lots of relaxing words all the same.

I want to emphasize that the examples I’ve used in this article are not set in stone to be slavishly copied. They are just ideas based on the principles of paradox. They wouldn’t automatically work with everyone, because any problem-solving strategy needs to take into account the unique perspectives and character traits of a person.

I’ll leave you with these paradoxical words from writer Raheel Farooq:

“Intelligence is to spot paradoxes. Wisdom is to live by them.”

This client has a problem with sugary snacks. At work there always seems to be an abundance of cakes and sweets and other sugar soaked “goodies” piled up near her workspace, there for the taking.

Mark checks out the level of her motivation to change and seeks to reframe sugary snacks (or gorges) from her frame of “treats” and “goodies.” He seeks to obtain the pattern of the over consumption and also starts to externalize it as a “sweet talking” con artist.

You can watch this session inside UPTV and if you’re not yet a member, sign up here to be notified when booking is open.

The Slave Driver Inside – Treating OCD

How to Spot and Treat Emotional Eating