Back to Top
Mark Tyrrell's Therapy Skills » Psychotherapy Techniques » Hero Therapy: What It Is And How To Use It With Your Clients

Hero Therapy: What It Is And How To Use It With Your Clients

How to use modeling to teach new skills and attitudes 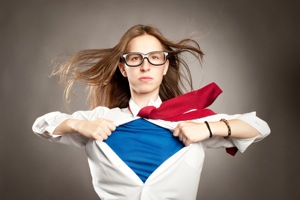 The boy in front of me was only nine and terrified of vomit. He’d had three nasty experiences fairly close together – once when his sister had been very sick on a cross-channel ferry, once when she’d thrown up on Christmas Eve, and once when she (the poor girl!) had been ill at a friend’s birthday party. Now James was terrified it might happen again. He kept refusing to visit friends and was constantly anxious around his sister.

However, he was easy to talk to and had a lot of interests. And being so young, he was exquisitely in touch with his imagination and therefore highly hypnotisable. He also badly wanted rid of his fear. He told me in copious detail what had happened during these ‘sick times’ and said that even just remembering them made him feel scared.

Time to get him feeling brave.

How Arnold Schwarzenegger helped me with a client

We changed subject: “What movies do you like to watch, James?”

“I love watching Arnie’s films with my dad!” (I was relieved to hear that his father was involved – Arnold Schwarzenegger’s films are not usually considered suitable for children!)

I asked him to close his eyes for a few seconds and imagine Arnie in a hero role. Then we talked at length about what Arnie’s characters are like. I’m not sure that empathy was top of the list of their qualities, but there you go. I then asked James how he supposed Arnie would have looked after his sister in those vomit situations if he had been there. James was not in any doubt.

“He would have been brave and calm! Nothing fazes him! He would have just helped my sister and sorted her out.”

Next I got James to shut his eyes and re-imagine those same situations, but this time watching them from the outside and seeing Arnie playing the role of James. Instead of getting frightened by these ‘memories’, a smile appeared on his face.

Then I asked him to imagine, for a while, actually being the Austrian muscle man himself, to feel his strength and cool calm collected thoughts. Now I asked him to remember those times as if he had been Arnie. Now he could think about all those previously traumatic memories calmly and enjoy his own strength.

By connecting with the core strengths of his hero, we had reframed those memories from recollections of fear and helplessness to recollections of calmness and courage. This changed the way those traumatic memories were processed in his young brain and successfully de-traumatized him.

'Hero therapy' reframed his memories from recollections of fear and helplessness to calmness and courage.Click To Tweet

That session lasted about 30 minutes. His mother told me some time later that James had actually been able to help and reassure another child at school who was sick in the classroom. Thanks to Arnie, the phobia had gone.

Of course not everyone has ‘heroes’ but most of us admire or look up to someone for something. If you want to help someone re-negotiate an old memory to help change the pattern of their response to similar situations in future, or to create a new more positive blueprint in someone’s mind for an upcoming event, then follow these five steps.

The 5 steps of hero therapy

Ask who your client admires, or who they feel would be best suited to deal with the situation they’re having difficulties with. This can be someone they know, someone in the media or even a fictional character.

Who in the world can you imagine would be best able to deal with what you’ve been talking about?

Ask what specific qualities their ‘hero’ or exemplar has that would change the nature of the experience. You’re looking for responses like:

She doesn’t let little things bother her. She concentrates on what must be done.

Get them to close their eyes and, in their mind, watch their hero dealing with that situation, bringing all their qualities to bear.

4) Take on the hero’s qualities

Ask them to imagine being that person and going into the (formerly) difficult (or expected to be hard) situation as their hero, to experience what it’s like to have full access to those ‘heroic qualities’.

Bring their attention to the fact that they can now internalize those qualities as part of who they uniquely are.

We can help people ‘borrow’ attributes displayed by extraordinary men and women but ultimately, I think, real heroism is to be found within seemingly everyday people. As ‘superman’ Christopher Reeve said: “A hero is an ordinary individual who finds the strength to persevere and endure in spite of overwhelming obstacles”.

Story Therapy: Why It Works And How To Do It With Your Clients

The Healing History of Therapeutic Storytelling