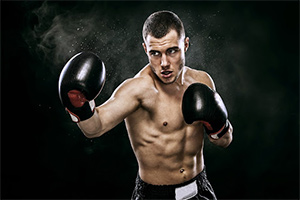 “Never say never, because limits, like fears, are often just an illusion.”

Mike had the square jaw of a superhero. A middleweight boxer, he’d come for help believing he could win.

“I see the other guy and I start imagining he’s going to win! Even when I know I’m better! Can you help me Mark?”

I had no idea whether I could (he was my third ever paying client!), but as doubt freezes action, I told him I could. This was no time for wavering.

Since Mike, I’ve seen many other clients for sports performance. Maybe you don’t or haven’t treated such clients, but I believe by looking at human performance in one aspect we can learn about it in all spheres.

The paralyzing effect of depression can be echoed in the hopelessness of past sporting defeats. The terror of panic attacks is paralleled by extreme performance anxiety. There are even crossovers with the addicted mind when athletes overtrain.1

I’ve found that supreme sporting performance requires an optimal state of mind. And this is about not just what the participant has in their mind but, equally importantly, what they exclude from their consciousness.

Sometimes it’s nerves polluting performance; sometimes, as with a young gymnast client, it’s memories of an accident. Sometimes it’s lack of self-belief, as with Mike the boxer, and sometimes it’s wanting success too much that spoils the focus and breaks the spell of flow.

Here are some approaches I’ve found useful when working with sporting clients. I’ll take it as read that they need to be properly and regularly trained, prepared physically, and supported by helpful people if possible. We’re looking at how to optimize performance psychologically.

Tip one: Reframe what is happening

Sometimes we need to begin by suggesting that there may be another way of looking at what seems like a stuck part of the sporting client’s perspective.

In my book on reframing I describe how I helped a young, up-and-coming racing driver.

Before entering Formula One this semi-professional 16-year-old was racing go-karts. Despite doing incredibly well – he was winning every race he entered – whenever he took the lead in front of other drivers, he would find that he actually felt far less comfortable than when he was positioned just behind the leaders.

He complained that when he was out in front he would suddenly become distracted and begin to focus on the drivers behind him and what they were doing instead of concentrating on his own driving and moving forward.

I suggested that he was always behind even when he was leading and therefore could relax when he was in front. He was baffled and asked what I meant.

I told him, “You’re always chasing something – time! Forget what’s happening behind you and you can fix your attention instead on chasing the one thing that is always in front of you… a faster time.”

Believe it or not, this really helped him diminish the anxiety of race leading. He was extremely hypnotically talented, as most top sportspeople are (because they have a wonderful capacity to focus, and practise doing so regularly).

So he sat there doing lap after lap in his mind as I’d asked him to do, so focused that his mother and I were able to just relax and chat! He got used to being in front and owning the experience of being in front, because he still felt comfortable being ‘behind’ – behind a better time.

There are always fresh and useful, sometimes transformative, ways of looking at these issues when you get creative.

Next, we can encourage that special state of mind and body that top athletes know and love.

Like embarking on a spiritual quest, when a sports person invites flow into their sporting practice they have to renounce certain factors from their experience.

As if guided by some mystical endeavour, the athlete must drop such worldly and human frailties as arrogance, vanity, fear, and desire, and even their sense of self as they become one with the activity itself.

As they meld into the present moment, time itself seems to mystically disappear.

The flow state, sometimes described as being ‘in the zone’, was beautifully described by the Hungarian psychologist Mihaly Robert Csikszentmihalyi as a state of awareness in which the process, not the outcome, is all that matters.

Forget everything but now

During training you may focus on becoming the best, being the champ, even earning money and plaudits, but all these presuppositions and projections need to disappear when you’re actually playing your sport.

All great sportspeople know about the exquisite, sublime, even ecstatic state of flow. They also know how wanting it too much can get in the way of achieving it, like trying to grab a bird rather than letting it land on your open palm.

All great sportspeople know about the exquisite, sublime, even ecstatic state of flow. They also know how wanting it too much can get in the way of achieving it, like trying to grab a bird rather than letting it land on your open palm. Click to Tweet

We can evoke this optimal state of flow – in which there is a certainty but not desperation, an ease even when performing the most difficult of dextrous actions, and a wonderful sense of love for the activity for its own sake and nothing more – by revivifying it for our client hypnotically.

We can talk to them about it to draw out a time when they have experienced it, then simply help them relive that state.

Once we take them back to previous times of flow, we can suggest that this state becomes anchored to their current sporting experience. We can link those feelings of developing flow or pre-flow to preparation rituals, such as putting on the judo gi, climbing into the go-kart, or fitting the skis.

We can also help our clients develop perfect inner practice.

Using visualization as a mental rehearsal technique is not new or uncommon for top sportspeople, but if you know hypnosis you can help them achieve deeper and more elaborate levels of visualization.

Why do sportspeople visualize? Here’s why.

A study at the University of Chicago examined the effect of visualization versus actual physical practice on people’s ability to make free basketball throws.2

Participants were split into three groups and tested on how many free throws they could successfully make. Then, for the next month, the first group practised actual free-throw shooting for an hour every day. The second group did no actual practice but simply visualized themselves making free throws every day for around 20 minutes. The third group did nothing.

After one month, the participants were tested again on their free-throwing skill.

Group number one had improved by 24%. Group number two, the purely visualizing group, had increased their skills by 23% – practically the same as the group who’d actually practised for a whole month! The control group, who hadn’t practised at all, outwardly or inwardly, hadn’t shown any sign of improvement.

Another study led by psychologist Robert Woodfolk at Rutgers University found that people who had simply imagined putting a golf ball into a hole before taking a shot were 30.4% more successful than those who did no such visualization.3

It seems that what we imagine doesn’t just happen inside our heads but has implications for our entire body. And so-called ‘motor imagery’ can increase actual physical strength as well as sporting skills.

In one study, male university athletes experienced a whopping 24% increase in the muscular strength of their hip flexors simply by exercising them imaginatively.4 More than that, they experienced decreases in systolic blood pressure and heart rate comparable to those of the actual exercisers as a result of this inner ‘exercise’. These were amateur athletes, but it has also been found that ‘normal’ volunteers can make strength gains purely from visualization.5

I’m certainly not suggesting that visualization should replace real practice or exercise, but it can certainly be a wonderful way to augment it. And if you know hypnosis, you can make this even more powerful for your clients.

We can help our sporting clients not just visualize, but feel, hear, smell, and therefore deeply inwardly experience, in a multilayered sense, perfect execution of their sport.

In fact, when you’re skilled in hypnosis, you can assist in taking a sporting client’s inner practice to new heights, speeds, times, and distances.

I did plenty of deep hypnotic rehearsal (and strength training) with Mike, our boxer. But first I reframed his preoccupation with both winning and losing.

I helped him focus on the process, not the outcome so he could simply inhabit the present   moment with no thought of loss or victory. After all, he said, “Winning or losing isn’t boxing – only boxing is boxing!” And I agreed.

I taught Mike self-hypnosis to practise outside of the ring as well as inside of it, and he soon returned to his peak. It wasn’t long before he began surmounting new peaks – “beyond where [he’d] ever been before.”

Winning became almost just a by-product of the way he now inhabited his sport.

Mike’s huge hand shook mine. I surreptitiously checked my arm. Happily, it was still attached to my shoulder. As he thanked me warmly, I felt a sudden spasm of pity for his next opponent.

What had I done?

How to help your client access the optimal performance state

As all good sports psychologists know, practice makes perfect, but perfect practice makes champions. Engaging the mind’s imaginative capacity is a rapid way to entrain perfect performance, and hypnosis is the tool for the job. You can learn how to blend hypnosis into your current practice and gain the most advanced, indirect, conversational techniques on Mark’s online course ‘Uncommon Hypnotherapy‘.