The Pandemic and Us

How has the global crisis shaped our minds? 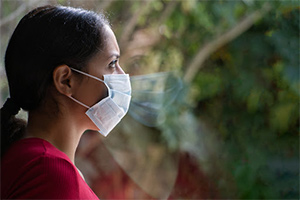 The general feeling that the world is out to get us naturally promotes anxiety.

“Security is mostly a superstition. It does not exist in nature, nor do the children of men as a whole experience it.”

The world has changed. We have become divided, even splintered.

It was once believed that societal threats bring us all together. We spoke of the ‘Blitz spirit’, in which death from the skies was met with, yes, nightly terror, but also shared stoicism and determination, a pulling together, a shared vision.

Society as one would get through this.

But what did this series of coronaviruses do to society? To collective and individual psychology? Did the initial Blitz spirit turn into a self-inflicted blitzkrieg of opinion, agendas, confusion, and even hate? Was the collective focus against the illness, or other people?

Has this existential threat strengthened or weakened us, collectively and individually?

The dangers of ‘them and us’

Some people saw the closing down of businesses, the printing of oceans of inflationary cash, and the governmental draconian measures as unnecessary, even outrageous.

They saw the pandemic as merely an excuse for governmental authoritarianism. Some suspected or questioned the evidence that the virus was as deadly as it was presented, that the vaccines worked, or even that the vaccines weren’t dangerous in themselves.

On the other side of the divide, some of those fully for governmental controls, vaccines, and restrictions saw people who even mildly questioned governmental policy as notorious ‘vaccine deniers’  or ‘conspiracy theorists’.  At one end of the spectrum, the death of ‘anti-vaxxers’ was deemed worthy of mockery,1 while on the other, illness and death of the fully vaxxed were deemed proof that vaccines were useless.

This ‘them and us’ mentality has its dangers. As soon as we begin to categorize or stereotype others as stupid, naive, or, worse, subhuman, then we:

Pond life, deplorables, and the creation of enemies

One side reduces the other to stupid, bigoted, dangerous, even subhuman. Meanwhile, the other side sees their ‘opponents’ as naive, easily led, and in favour of tyranny. And so our binary, un-nuanced culture spirals its merry way towards oblivion.

So one impact of the pandemic may have been to produce a more divided people. And chronic division within societies rarely ends well.

Rather that one common enemy – the pandemic, say, or even inept government – there are lots of enemies, one of which may be your ‘dumb’ neighbour or (former) friend.

For better or, as I suspect, for way worse, we are nowhere near the Blitz spirit.

Abraham Lincoln’s wise sentiment that we should act “with malice toward none, with charity for all” has been lost in a self-righteous haze of spite, rage, sneering superiority, and mistrust – all fuelled by a howling media.2

But what of the personal psychological effect? How are we as people after the pandemic?

Certainly, anxiety conditions, depression, and addictions, as well as sleep disorders may well have increased hugely during the pandemic.3 That’s to say nothing of the trauma caused by the increased incidence of domestic abuse.4

This isn’t too surprising, of course. The palpable mass fear, the time alone separated from the touch of loved ones, the crippling uncertainty, the opportunity to drink… all this was exacerbated by lockdowns. The sense of ‘stranger danger’ while simply going outside for a walk or to the supermarket, and the general feeling that the world is out to get us, naturally promotes anxiety.

Pile on top of this the fact that the treatment of other illnesses and diseases has been, in some cases, impossible,5 and we are in a right sorry mess.

But if this international crisis has made us all too risk averse, then the risk of fearing to live may be the most dangerous consequence of all.

I recently read Dr Iain McGilchrist’s new book, The Matter with Things: Our Brains, Our Delusions, and the Unmaking of the World.6 It’s about all kinds of things (it’s an impressive 1,600 pages!), but one of those things is how society can come to favour one way of knowing over another.

The left hemisphere of the brain thinks it knows it all, likes bureaucracy and rules, prefers theory to reality, misses the bigger picture and context, and is cautious but also over-confident in its own rightness.

The left hemisphere is intolerant; sees people only insofar as they fit into a certain category or identity group; and doesn’t perceive, so therefore doesn’t appreciate or allow for, uniqueness. It may not ‘get’ humour, missing the implicit and insisting on the validity of only what is clear, immediate, and explicit.

And, crucially – in the words of McGilchrist – it “doesn’t know what it doesn’t know “, so any talk of it missing the full picture is deemed nonsense.7

The left-hemispheric way of perceiving is vital to human survival but, to use a metaphor put forth in Iain’s McGilchrist’s earlier book, The Master and His Emissary,8 it feels it is the master when in fact it is simply the emissary.

McGilchrist argues we are now living in an age in which the left-hemispheric way of knowing is encouraged at the expense of broader, wiser ways of seeing.

The right-hemispheric way of knowing is wiser; it sees wider contexts and likely consequences of current actions. It may pursue smaller risks as a way of averting greater, longer-term risks. Greater risks the left hemisphere cannot see.

By trying to hide from any and all threats, we leave ourselves more open to harm when we do, perhaps inevitably, become exposed. Not only do we make ourselves more fragile and less resilient, but we deny ourselves the opportunity to become antifragile.

Antifragility happens when we’re strengthened through exposure to stressors.9 So stressors don’t just promote resilience, they actually make us stronger than we were before. Antifragility isn’t just resilience – it’s the exact opposite of fragility.

Maybe our left-brained way of seeing as a culture has forgotten that to become stronger we sometimes need to be exposed to more stressors, as long as it doesn’t overwhelm us.

Too much protection, trying to cover all potential threat bases can, paradoxically, be the biggest threat to individual wellbeing and empowerment.

Too much protection, trying to cover all potential threat bases can, paradoxically, be the biggest threat to individual wellbeing and empowerment.Click To Tweet

This is true on a psychological level, but also on a physical one.

Could it be that chronic, life-shrivelling, fulfilment-evaporating overcautiousness will be one unintended consequence of the pandemic?

Please understand, I’m not suggesting that all the precautions were unnecessary. Far from it. I’m just talking about the possible ongoing consequences if we carry on trying to live as though under permanent threat.

Too much of one thing can cause its complete opposite. Too much security, comfort, and ease can lead to pain and suffering in the longer term – the very parts of life we were trying to escape.

Lack of exposure to pathogens when young may deny the immune system the chance to properly learn (yes, it learns!) and strengthen, which can have a lifelong negative effect on immune function.10

The huge increase in peanut allergies in young people11 may be, in part, due to avoidance of peanuts when young.12

Does a great deal of risk aversion strengthen or weaken us?

Does sending a message to young people that ‘words are violence’ teach them to respect others’ feelings or simply to fear committing some mediaeval sin? Or to feel like they might never recover from being told words they don’t like?

Do ‘trigger warnings’ actually produce better-adjusted, less fearful people? Research suggests that not only are they ineffective, but they may cause harm.13 Trigger warnings can have the deleterious effect of cementing trauma survivors’ negative self-perceptions so that the trauma comes to feel more central to their identity.

When it comes to getting stronger, it’s a case of “as above, so below.”

We can’t avoid all unpleasantness in life, and nor should we. We have emotional immune systems as well as physical ones.14 Both need to avoid overexposure to overwhelming threats, but at the same time need a reasonable amount of exposure to adversity in order to become stronger and therefore better able to protect us.

One possible function of traditional fairy tales may have been to expose young children to wickedness, hardship, and duplicity (but also courage and honour) in a safe way. Once upon a time, exposure to these elements of life was not avoided but encouraged for youngsters.

We need to open up, in our minds and in our lives.

Opening up to life

It seems that too much caution – treating others and ourselves asif we are fragile, weak, and endangered when we’re not – may be a huge risk in itself.

We may be the first culture to fail through mass overcautiousness.

I’m not for an instant downplaying the real heartache and suffering Covid-19 has wrought. During a 5-week period when the first variant was new I felt worse than I’d ever felt in my life, and I still, sometimes, feel the after effects even two years later. People died, people lost loved ones. People suffered, too, because of the restrictions placed upon them.

But if we, as a culture and individually, are to live again – to truly live – we need to open up to life, to take some risks, to not let fear rule us.

Avoidance on the emotional and behavioural level is akin to lying on the couch all day then wondering why our muscle tone has disappeared.

Yes, the vulnerable need to be protected – but if we carry forward too much cautiousness from the pandemic, we may suffer much more because of that. We may fossilize as a society and wither as individuals.

Turning people into enemies (‘them’ and ‘us’), trying to control everything left-brain style, and living as though life is always out to get us all sap the life from living.

Trying to live with no risk is like trying to walk with no steps.