The Hypnotic Art of Confusion 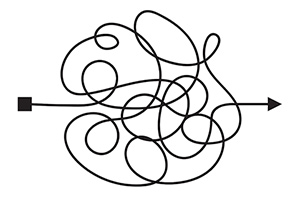 “Enlightenment is always preceded by confusion.”

“Now there is a part of you which is apart from the part thinking logically and listening to my voice… and it’s that part of you that can take a part in this and take apart logical constructs and simply enjoy… drifting deeply into hypnotic trance… now!”

Whether you’re a hypnotherapist or not, the way confusional language affects the mind demonstrates beautifully how the human mind works.

I’ve done maybe 200 hundred public demonstrations of hypnosis in public workshops. Oftentimes I elicit volunteers from the group who are very able hypnotic subjects. But sometimes I might get a volunteer who is different.

Tripped up by intellect

Don’t get me wrong. The capacity to analyze and deconstruct reality has some vital uses in life. But if the tool is overapplied, such over-intellectualism can prevent spontaneous and creative thinking and block a person from experiencing hypnotic trance.

One particular client springs to mind. Andrew had to logically weigh up everything. If you made a joke, he would be more likely to think about it than react to it. And it was he who volunteered for my first demonstration of hypnosis for the day.

Being methodically analytical is a wonderful tool, but not necessarily a tool you want to use exclusively. Other parts of the mind need to be developed and used in order to gain fresh insights and capacities.

I wanted to appeal to Andrew’s unconscious mind, but in order to do that I had to somehow bypass his powerful, if laborious, conscious mind.

Going off script with hypnotic confusion

After a little conversation, I used the words I began this piece with. Andrew blinked rapidly for the first time and started to look a little glassy eyed. The confusing nature of my words had tied up his conscious attention to such an extent that, while his conscious mind was preoccupied with unwrapping what I’d said, I was able to begin to communicate with his unconscious mind.

At that point I saw that I had interrupted the mechanical and automatic flow of analysis. A mild shock is hypnotic in that certainties are shaken. We can be shocked to some extent by being confused. Shock triggers the same electrical signalling in the brain (the PGO spike) as is activated when we start to dream at night. This is why things can seem to go in slow motion or feel quite dream-like during, say, a car accident.

But what are the potential benefits of confusion in the mind? And why do hypnotherapists use it to induce trance and enable the mind to develop new ways of responding to life?

The healing potential of confusion

In order to learn, we need to be open to experience. We need to come out of mechanical consciousness, which has us approaching reality predictably and automatically.

When something confusing happens, the ‘attention gates’ of our minds open wide. We become confused when the mind has nothing to match to, because everything feels unfamiliar and unexpected or beyond our current powers of understanding.

You are not expecting a sound in the night from downstairs, but you hear it. How do you make sense of that? Maybe you can’t! So now you become fully open to learning what might be there. You become wide open to experience.

Or you’re expecting another step on the stairs as you walk down in the darkness. But it’s not there. Confusion results because your expectations are confounded when you try to step down where no step exists.

We can only be confused, and thereby have our ‘attention gates’ fully opened, when our expectations are confounded.

This is why hypnotherapists sometimes use confusion or surprise: to open the mind for learning. All psychotherapy, if it is to have an effect, requires new learning – as does the development of new abilities to perform better in life.

So how can we use confusion to tie up the conscious mind so we can appeal more directly to a person’s remarkable and powerful unconscious potentials?

Loosening the reins on the mind

We often see confusion as a bad thing, a state of mind to be avoided at all costs. But consider this:

When we are confused it might be because our ideas as to what life should be like are too tight and rigid. The more rigid our expectations, the more likely it is that reality will jar against it. So confusion may be symptomatic of a rigid mindset.

Spiritual teachers1 have long used humour to shake up and loosen rigidities in the mind, and so have therapists.

A joke can loosen thought from its straitjacket if it enables us to see new realms of possibility and context. You think and assume a narrative is going in a certain way, then bam! The joke shows you another level of meaning. Confusion is often a necessary part of humour, or a prerequisite to the understanding which produces laughter.

Hypnotherapists will use puns, double entendres, metaphorical language, and even purposeful and playful misunderstandings because such communication is inherently hypnotic. There is something profound here:

But even when it comes to confusion, there are some rules for using it to aid hypnotic induction.

Confusing language ties up the interfering conscious mind, giving it something to chew on (to woefully mix metaphors!) while the hypnotist is able to communicate with the unconscious mind. But it shouldn’t just be gobbledygook.

Confusing language should not be gibberish, but should make sense given time to fathom its meaning consciously. The unconscious mind can understand even as the conscious mind struggles with the confusion. In this way we begin to communicate with the two parts of the mind separately.

Let’s revisit the words I used to hypnotize Andrew:

See! It actually does make sense!

Okay, so next I want to talk about how clarity can be all the more powerful because it’s prefixed with confusion. Let’s see if we can clarify that!

Rule two: A confusional induction should contain clarity within it

If someone is confused, then when they do get clarity they’ll cling onto it and make use of it – more so than if they hadn’t been confused.

If I had told Andrew to “go into deeply relaxed trance” as soon as he had sat down, he would have analyzed my words, thought about them perhaps, but probably not actually responded. By using purposefully confusional language first, I gave his mind a kind of desperation for clarity. Clarity become more valuable to him and he found he could respond unconsciously to it.

Here’s another example of a confusional hypnosis script:

“And people can… you know… know they know, on one level, all kinds of knowledge they don’t necessarily know consciously; they find that knowing that unconsciously means they don’t have to say no to hypnosis and… find that they can now [clear command] start to go into deep trance.”

So using confusion techniques makes people more suggestible. Ambiguity can mean that when the clear order, so to speak, does come it is more readily accepted.

Rule three: Make sense most of the time

If you look at people when they are confused, you’ll see they are highly focused. And strong focus is akin to hypnotic trance. When you can’t quite figure something out, but it seems really important that you do figure it out, you have an activated expectation. Focus and expectation are at the heart of the confusional technique.

But in order to retain the power of occasional confusional hypnosis we need to use it sparingly and make sense most of the time, especially when we are not ‘being hypnotic’ with the person.

Think about it for a moment. If someone whose opinion you respect usually makes sense when they’re talking, then you’ll pay attention to them. When, on occasion, they seem to be saying something important to you, but the meaning isn’t immediately clear, you’ll assume you need to pay more attention in order to grasp what they are saying.

Now let’s get back to Andrew.

How to help the giant sleep for a while

Like all hypnotherapists, over the years I’ve had to adapt my inductions to fit the type of person who wants to be hypnotized.

Andrew, like many other people, was so analytical and so logical that it was as though his muscle-bound and highly developed consciousmind continually crowded out his spontaneous and creative unconscious mind. I wanted to preoccupy his conscious mind for a while so I could help mobilize his unconscious resources and help him experience deep hypnosis.

Andrew travelled deeply into a beautiful hypnotic trance. He experienced all kinds of hypnotic phenomena and told me afterwards his experience had profoundly affected him and had amazed him.

Confusion can be your friend. Something can make sense to parts of you while not seeming to make sense to the everyday analytical mind. But for the sake of clarity, here’s a quick summary:

Andrew told me as he awakened from my confusion hypnotic induction that he had “no idea what had just happened.”

But a part of him knew exactly.

(1) See Special Illumination: The Sufi Use Of Humour by the writer Idries Shah.