Back to Top
Mark Tyrrell's Therapy Skills » Self Esteem » “I Feel Like A Fake!”

How to stop imposter syndrome sapping your client's self esteem 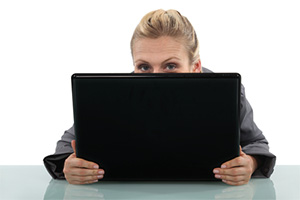 “The exaggerated esteem in which my lifework is held makes me very ill at ease. I feel compelled to think of myself as an involuntary swindler.”
~ Albert Einstein

James lived in fear that he’d be uncovered as a fraud at any moment.

He knew this fear was illogical! His PhD in computer science, years of experience, and having way more qualifications than most of the people he worked with proved it.

Yet he still sometimes felt like an imposter in his work.

“I feel like a fake when I’m teaching the new students! Like, who am I to tell them how things should be done? I feel tormented by a sense of unworthiness that makes me doubt myself at every moment.”

And on it goes.

Qualified, able, and conscientious people feel tormented by thoughts of not being the ‘real deal’. Fears of being found out, exposed, and uncovered as the imposter they feel themselves to be rip away at their self esteem like an inner sadistic heckler who just won’t shut up.

Imposter syndrome is something to be overcome in order to thrive in life and work. Especially when, objectively speaking, you are the real deal.

So what do we know about imposter syndrome?

Self esteem shrivelling from the inside

Imposter syndrome – feeling like a fraud – really means feeling unable to internalize one’s achievements, abilities, and talents. It’s often accompanied by feelings of being overvalued by others; a discomfort with positive feedback. In this way, we can see it has parallels with low self esteem.

Imposter syndrome is not considered a psychological disorder as such, but studies in the 1980s found that two out of five successful people considered themselves to be frauds and overvalued.

This means that (and, believe me, arithmetic is not my strong point!) there are millions of capable, smart, able folk who are selling themselves short and not really fulfilling their professional destinies.

So who is most likely to fall prey to this negatively distorted sense of who they are?

Well, guess what, it’s those good folks who tend to be efficient, skilled, conscientious… and prone to guilt (1).

Essentially, imposter syndrome is the bias of low self esteem clashing against the rocks of disconfirming positive feedback and the discomfort that causes.

We feel fraudulent when we feel overvalued.

In a way, imposter syndrome is delusional – but don’t get me wrong here…

Imposter syndrome is not a psychotic delusion. People with it understand cognitively that they are qualified and experienced.

It’s just that they feel that they are not really up to the position they occupy.

Now, of course, some people really are ‘not up to it’.

A ‘genuine’ imposter, for example, might well have gaps in their skills, knowledge, or ability that gets in the way of doing their job well and leads to problems. Real imposters, however, tend to have an elevated, rather than a diminished, sense of entitlement and rarely worry about feeling fraudulent. They’re much too busy being fraudulent!

The long and the short of it is that imposter syndrome is not some kind of psychotic delusion, but more a bias of feeling.

So how might we help people transcend ‘imposter syndrome’, this most pernicious of self limiting distortions?

Tip 1: Don’t try to argue them out of it

Like any self esteem issue, imposter syndrome is a kind of extreme thinking, a belief. And beliefs can be strong – to the point that some people are prepared to die for them.

My point here is that a strong belief can sometimes be strengthened rather than weakened by direct (though well-intentioned) contradiction.

Consider this: people suffering from imposter syndrome quickly brush aside any proof of success as something else – luck, timing, other people ‘being nice’, or the result of managing to convince others that they are more intelligent and competent than they ‘really are’.

Listen to their concerns without prematurely assaulting them with positivity. As when approaching any form of extreme belief, we need to be both subtle and respectful if we’re to have any hope of modifying our clients’ feelings so that different facets of life can come into view.

Rather than confronting someone’s negativity head on, I might later in the conversation (perhaps as a non sequitur, so it’s more attention focussing), say something like:

You know… I can’t help being reminded by all this of the Dunning-Kruger effect (2). That’s the phenomenon researchers have identified where the poorest performers are the least aware of their lack of competence and the best performers feel overvalued because they just can’t believe that other people can’t do what they do so well…

Then change the subject and talk about something else.

This is an example of ‘seeding’ an idea for the unconscious mind. For seeding to work, it should be presented as indirectly as possible and left alone long enough to ‘take’ in the mind of the listener, undisturbed by the conditioned responses of the conscious mind.

Describing known patterns, such as both the Dunning-Kruger effect and imposter syndrome, is a great way of presenting reality objectively and leaving someone to pattern match to themselves for themselves. This allows them to see the truth of their own cognitive distortion more easily ‘from the outside’, thereby loosening its grip on them.

But again I stress that it’s not so effective to jump straight in with this immediately after they indicate they have been feeling like a fraud.

Ideas that will help strengthen their objective ‘mindful’ observing self can be presented later, when they are less anxious to defend their limitations.

The final tip is one I have found to be incredibly powerful in loosening all forms of imposter syndrome.

Tip 3: Remind them that it’s all made up

When somebody is really efficient, creative, driven, or able in any way, it can be hard for them to understand that not everyone finds what they can do easy or even possible.

When somebody is really able, it can be hard for them to understand that not everyone finds what they can do easy. Click to Tweet

Okay, so that’s clear. But there is, I think, another reason why millions of people can feel perfectly genuine when some title or role is bestowed upon them. And when you clarify this for people (and maybe even yourself?), it can feel like a huge relief.

Remind them that all institutions, all titles, all organizations and fields of study, all job titles, and all august and traditional academic and professional bodies, were, at one time, simply made up. Imagined. Dreamed up. Invented and instituted by someone.

An idea like this is often best presented while the client is wrapped within a deep, satisfying, cozy, and relaxed trance state.

And you know, when you think about it… and feel about it, it’s not surprising that so many people fall into feeling somehow that they are an imposter. Maybe it’s because it’s easy to forget that everything was, at one time or another, dreamed up by someone because… it’s all made up. Humankind started off pretty basic, maybe living in trees with other primates. We came down from the trees, but we didn’t find Cambridge University or Harvard or the tax office or electrical engineering jobs or psychologists already waiting for us. It’s all made up. We were a bunch of primates in trees and at some time in our history someone invented universities, medical establishments, legal procedures, titles… it was all made up… And through the ages, all that stuff was simply… made up… from make believe by someone… ideas that came into someone’s head… a process that began tens of thousands of years ago… in the seeds of the imagination… as paintings on cave walls… it was all made up… and that’s fine… you can be cool and relax with that… and maybe even be an innovator yourself… as this is part of your human heritage and destiny…

People are so often overawed by institutions, job titles, and ‘ancient’ professional bodies. So it can be a great thing to contextualize all that.

Healthy self esteem isn’t about seeing yourself in unwaveringly positive terms, but clearly and fairly in the context of your life. Low confidence leaks energy by creating unnecessary chronic stress. When someone breaks through imposter syndrome, they can really start to live their life with total energy and focus.

Why Affirmations and Compliments Don’t Boost Low Self Esteem