How to Stop ‘Headline Thinking’ in Your Depressed and Anxious Clients 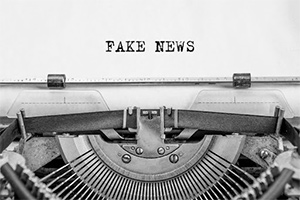 Things are not as black or white as newspapers may initially want us to think when they attempt to grab our attention.

Ever read a news headline that just screams at you? Wham bam, your fear, outrage, or hope button gets well and truly pressed. But then, when you get past the blaring headline, you notice something.

You read the actual copy underneath the shrill headline and quickly discover the headline was misleading at best and downright fake news at worst. Things are not as black or white as newspapers may initially want us to think when they attempt to grab our attention.

Sometimes something stated as an immutable fact in a headline turns out to be simply conjecture or even a just a faint possibility when we bother to read further.

A Mail Online headline from 6 May 2020 shrieks:

But by only the third bullet point into the article we find that “IS” has already turned to “may”: “A study of eight cases has suggested that the syndrome may be caused by coronavirus.”

This isn’t to say there may not be something of concern here. But it does show us how certainty (perhaps with the implication that this is a definite, significant problem) can, on closer examination, turn into conjecture and mere possibility (which may or may not even be valid).

Headlines are often downright misleading. In November 2020 The Guardian headlined with:

England lockdown was needed but graphs were a mess, says statistics guru

Nowhere in the actual body of the article did it mention that the “guru” in question, Professor David Spiegelhalter, had said lockdowns were needed at that point. And there was a good reason for that – he hadn’t! He didn’t want to comment at all on politics. He complained to The Guardian after ‘his view’ was shared on social media and, to be fair, they did respond by changing the headline.2

Sometimes headlines are actually opinions disguised as news, as with this headline from The Evening Standard newspaper back in 2009:

Israelis go to polls to choose between three warmongers3

Now, whatever one’s views about any of the above, the point is, headlines, by their very nature, are overly simplistic and strongly emotive.

But what if a person thinks in ‘headlines’? In what ways might ‘headline thinking’ hurt us and others?

Sometimes we all think in ‘headlines’ that can be incomplete or downright misleading. I have done it, and still do it, sometimes. But learning to see beyond our own initial emotional headlines can, I think, improve our psychological balance and wellbeing.

‘Headline thinking’ can have, not to be too hyperbolic about it, grave consequences. If someone lives their life with only headline thinking, they can have terrible biases. They may live lives of depression, cynicism, and hopelessness.

And if they don’t expand on their overly simplistic headline thought, life can seem scarier than it needs to.

I don’t want to imply that all-or-nothing, headline thinking is the only cause of emotional problems, but it’s certainly a consequence and can be a cause.

Read all about it!

“All men are bastards!” is an example of a ‘headline’ that’s focused externally. But many of the client headlines you’ll hear will use first-person pronouns, especially if they issue from a depressed client.

People who are depressed, anxious, insecure, and low in self-esteem may lead their inner life through this kind of emotive, attention-grabbing headlining.

This isn’t to say a headline is necessarily a lie though.

Headlines often contain a smidgen of truth. They’re not always totally devoid of any crumbs of reality. Okay, ‘World War 2 Bomber Found on Moon‘ may have been an exception!

But when clients think in headlines we can help them, where necessary, look deeper – behind that headline.

Stop press! “I’m the dumbest person in the world!”

This headline was presented to me by my client Brian several years ago. Whether he realised it or not, he seemed to be demonstrating a kind of inverse hubris. Being the worst is, weirdly, a kind of status. He even added a subtitle: “Seriously, I am the dumbest guy ever!”

This kind of statement immediately strikes me as, at the very least, incredibly exaggerated, misleading, and devoid of context. Time to dig deeper.

So how might we ‘fact check’ a little with our clients? (Not, of course, that headline thinkers are trying to deceive!)

Tip one: Look out for headlines (but hold off challenging them)

Sweeping statements often hit us between the eyes when we hear our clients make them.

When a client gave me the headline “All men are bastards” I was intrigued to hear more… but there was no more. No qualifier. Not even an exemption for me!

As I inwardly examined my parentage I suspected that particular headline might be a little… incomplete. But she, at that point, lived her life by that headline.

So listen out for client headlines, and pay attention, because it’s easy just to surf along with dialogue without really listening. But I’d caution against challenging them immediately, as that may simply make them double down on their headline. People tend to defend what feels emotional and righteous if ‘attacked’ directly.

But we can dig deeper, like a proper ‘journalist’. We can help our clients ‘read further’ and wider.

Tip two: Ask them to ‘quote their sources’

Fake news! you might think when a client announces the headline that “There’s no point in trying, I may as well just give up!”

We might look at the evidence. Where did this ‘story’ come from? If a news outlet proclaims some outlandish or dramatic headline we want it to provide evidence. We want to know what its sources are. We can do the same thing with clients.

One client told me that everyone disliked her.

“I don’t dislike you,” I pointed out.

“You’re paid to like me!” she countered. Hmm, she was finely tuned to defending her negative headlines! I tried another way.

“Has anybody ever liked you?”

“How much do you pay them to like you?”

She laughed but said nothing.

“So not everyone dislikes you?”

I wasn’t trying to catch her out, simply to get behind the headlines. Headlines are overgeneralizations, and therefore never true. At least not in the absolute sense they appear.

This kind of Socratic questioning can be so powerful, as it’s completely non-confrontational. It simply invites people to look further than their own headlines.

“Is it possible for someone to believe they are disliked even when they are not?” I asked her next.

This kind of question helps someone move below the emotive headline and at least begin to consider that the real story may be more nuanced.

The impact of scary headline thinking

An overgeneralization is a way of cutting out bigger-picture thinking and narrowing perception down in ways that can be counterproductive. We’re not trying to reframe a negative as a positive; we’re simply helping the client to see wider, to read beyond the blanket statements of emotional headlines.

If all news outlets just wrote headlines and nothing else (I know some do seem to do that!), then the doom and gloom ratcheted up by the media would be even more alarming.

Headline thinking can, I think, come from high levels of emotion. The fight-or-flight response is all or nothing and not at all nuanced – so it tends to produce all-or-nothing thinking. The more generally emotional someone feels, the more headline-like their thinking will be. And it works both ways: to make people more emotional, just give them scary simplistic headlines!

I suspect being raised on a diet of emotive headlines from the media and from those around us – hearing our parents, for example, talk in negative generalizations – can mould us to be headline thinkers too.

If we become a culture of emotive headlines and little more than that, then – at the risk of sounding like a headline myself – any more refined thinking in civilization may perish.

Living a life of purely self-generated headlines and assuming they constitute the whole of reality makes us easy prey for not only manipulation by others but also depression, anxiety, and anger.

Living a life of purely self-generated headlines and assuming they constitute the whole of reality makes us easy prey for not only manipulation by others but also depression, anxiety, and anger. Click to Tweet

Much of psychotherapy is, I think, an endeavour to help clients calm what needs to be calmed within themselves so that they can see the whole, not just the part that fits their prevailing emotional pattern.

I certainly don’t mean to say that treating depression can be simplified to one aspect, such as helping clients see headline thinking in themselves and therefore begin to correct it.

But this kind of thinking is a feature of depression, and other emotional states too.

Look beyond the headlines

I spoke to one client, David, about headline thinking in general and, to his credit, he recognized it in himself.

One day he told me he’d started to feel depressed, then asked himself what the ‘headline’ was behind his feeling.

“Then,” he told me, a note of pride in his voice, “I read below the headline and found all kinds of arguments that didn’t support the premise of my own headline at all. And I felt better!

“After all,” he reasoned, “I’m not the kind of guy who blindly believes overblown headlines without looking further, so why should I do that with my own negative simplifications?”

How to help your depressed clients feel better quickly

Mark has been teaching his approach to treating depression to many thousands of health professionals. Now you can learn with him, online, on his course How to Lift Depression Fast.