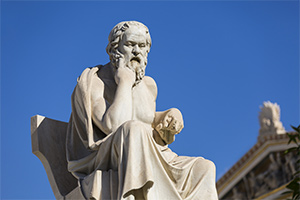 Socrates would guide pupils to the answer, rather than answering it himself

“The wise man doesn’t give the right answers, he poses the right questions.”

Samantha stared at the wall.

“I’ll never be free of him! He follows me everywhere.” Distractedly she waved at her head. “Not out there, but in here.”

Things had gotten desperate. She’d left him, but the persistent guilt was strangling her. Thorny, tortuous roots from the past were smothering her life.

Constant rumination had her in its vice-like grip, and it wouldn’t let go by day or night. A pervading sense that it was her “fault” (his drinking, the relationship breakdown) had eventually tipped her into depression.

Samantha had always been the “carer”. The one who looked after her alcoholic father. The one who comforted others. The one who cared. The one who saw her own basic needs as mere selfish desires. But this caring woman had left Mike three years before. How could she? After all, he was an alcoholic, just as her father had been.

Mike frequently threatened suicide. Constantly shouted and put her down. Told her she’d have blood on her hands for abandoning him. He hadn’t done anything to himself (other than continue drinking), but she still felt responsible for him. He had pushed her guilt button, and never let go.

“I am a wicked person! I don’t deserve to be happy, Mark! I’m only here because my daughter deserves more from me as a mother.”

She clearly wasn’t. Wicked, I mean.

I didn’t tell her “No, you are not wicked”, because I wanted her to tell herself that – and mean it. Why?

Others had already gone down the “You are not a bad person” route. It had proved about as effective as telling a young adult brought up on perpetual pampered praise that they had messed up on their first job. Nope… not going to accept that.

Disconfirming feedback when psychological conditioning has been strong is not at all welcome, whatever form the conditioning took.

So if I didn’t try to argue with Samantha’s depressive thinking, what did work? What changed Samantha’s hopeless mindset?

Learning to live and love again

What do you notice about Samantha’s thoughts? That’s not a Socratic question, because I will answer.

She was thinking in absolutes. All or nothing. “I am a bad person!” (not “I am a multi-textured person with good and less good bits in me!”)

Early on in the session she’d told me tearfully, “He was misunderstood; I should have made more effort to understand him!”

And, a little later… “I should have been there for him!” (He was living on welfare, having drunk all his money – and much of hers – into his fast-decaying liver.)

But later in the session, I helped Samantha become calmer, and so more able to see wider perspectives.

Socratic questioning: Teaching by asking instead of telling

Some practitioners assume a therapeutic reframe happens when we suggest to a client what to think. But this is often not the best strategy, as emotional biases are resistant to logical argument.

Being told to think about things in a certain way can mobilize a hidden need to rebel: a need lodged deep within many people and associated with the basic human needs of maintaining a sense of autonomy and control and, in some people, status.

If I tell you that you should do something, even if you cognitively agree with me you may be emotionally and behaviourally drawn to doing the opposite: the rubber band effect.

Not only that, but telling a depressed person how they ‘should’ think can leave them focusing more on how misunderstood they feel than on what you told them they should think differently about.

Instead, reframes can be triggered by jokes, puns, misunderstandings and even simple questions. A reframe will lead to wider knowledge and new ways of not just thinking, but being and feeling.

So what kind of questions can lead to beautiful epiphanies, enlarged and enlivening knowledge, and wider understanding?

Socrates and the art of happy discovery

Nearly 2,500 years ago, Socrates observed that some types of knowledge were already inside people. Rather than putting knowledge into them, you could draw it out so they could, themselves see it and use it. And there’s a wonderful thing. But the story doesn’t end there.

Modern research(1) has found that ‘Socratic Questioning‘ can be an extremely effective antidepressant. Here are three methods I used with Samantha to help her think differently about her situation.

1. Does your idea apply in all contexts, and if not, why not?

I asked Samantha: “Would you say that all women who leave abusive men are bad women?”

Notice I didn’t tell her she wasn’t a bad person. I simply encouraged her to look at the wider picture. The pattern. She drifted inward, her eyes glazed, a sign that a reframe may actually be happening.

Eventually she said “No. They may have had good reasons for leaving…” Wheels were starting to turn. I felt Socrates by my side. Or maybe it was the faint smell of moussaka gently simmering in a nearby apartment. But I digress.

Other examples of this kind of context-widening question are:

Depression has people thinking in all-or-nothing extremes but also makes them resistant to more subtle forms of thought. Context-widening questions like, “Does this apply to everyone? Or in all situations?” can help people start questioning their own depressive assumptions.

We can also ask depressed clients questions that help them look at possibilities in another way.

Samantha spoke at length about “understanding”. Mike had been “misunderstood”. It seems that he had used the word ‘understand’ a lot with her and it had rubbed off: “No one understands me!” (Yes, Mike did sound like a raging adolescent.) Or “You don’t understand me!” (Apparently a cardinal sin.)

Samantha lived with Mike for six depressing years. He shouted incessantly about “understanding” without ever seeming to make any effort to understand her. In fact, what it might actually mean to “understand” another human being had never even been discussed.

I asked Samantha: “Is it possible that understanding someone may make little or no difference to their behaviour?”

Again, she really thought about this, as if struck by a germinating possibility.

I asked her: “Is it possible that someone can’t be understood in ways that the word “understood” is often used… say, in the way we understand algebra [not that I did, I joked!] or road map signs?” This was about as leading as my Socratic question got.

Other possible examples to use with clients include:

Depressive thinking – actually, any emotionally-driven thinking – narrows context. It has us looking for and seeing only those possibilities that fit the narrow spectrum of the prevailing emotional bias. The wisdom of Socrates can help us out here too.

3. Are there any other possible reasons?

There are many ways of looking at just about anything. But the interpretive lens of depression is narrowly filtered.

Had Samantha “abandoned” her ex-alcoholic abusive partner? Or had she escaped him, to save herself and her young daughter? Had she simply replaced one excuse to drink – “You don’t understand me!” – with another – “I drink because you abandoned me!”?

He drank when she was with him, and he drank now. Yet he blamed her leaving for the fact that he was drinking and unhappy. These were the facts.

I asked Samantha: “Are there any other reasons why Mike drinks that actually have nothing to do with you being with him or not being with him?”

She pondered for a moment before revealing that, actually, he had drunk before she even met him.

I further asked: “Is it always someone’s ‘fault’ that a person drinks and doesn’t find happiness? Or is it just how things work out for some people until they find it within themselves to change?”

People make illogical jumps all the time. The way they do this is to go from specific to global.

Socratic questioning can serve as a powerful corrective to this kind of depressive reasoning (which often lies unexamined beneath a general feeling of hopelessness).

Other possible examples of Socratic questioning to use with clients include:

We can also add to this kind of questioning with evidence-based inquiry. All emotional problems rely on selective cherry-picking of (toxic) evidence.

Now, none of the above assumes that how your client sees things is skewed in any way. Maybe they are right.

But it does require they go beyond simply assuming or imagining reality is just as they see it. It can also help people to avoid globalizing specific instances (he doesn’t like me = nobody could ever like me!)

The fact is that feeling emotional about something may have nothing to do with the reality of what we feel emotional about. A fire alarm can go off independently of the presence of an actual fire.

Simply asking questions like this really began to loosen some of Samantha’s thinking.

She clearly also found my company calming, as she was able to examine some of these ideas non-emotionally for the first time. That in itself was a major step for her.

You can also use Socratic questioning for yourself in many areas of life.

Socratic questioning is used beyond the therapy room. Parents, teachers and coaches as well as good friends use this powerful form of perspective-enlarging, context-widening communication to indirectly build the capacity for creative thought.

Depression, and its close companion low self-esteem, stop people being reasonable and fair about themselves. Depressive thought, driven by powerful feeling, is fanatical in the sense that it deals in absolutes and rigid, sharp all-or-nothings.

Socratic questioning is so antidepressive because it requires the kind of thinking that people who are resistant to depression use naturally. It is an ancient way of encouraging a delightful maturation of thought that makes navigating the capricious seas of existence so much easier.

By her fourth session, Samantha felt she was no longer depressed. She’d caught herself not thinking about Mike for whole days at a time. And when she did think of him, it was with calm compassion, not jagged and exhausting self-recrimination. I had asked her in the first session:

“Is there any way you did what you did at the time because it was all you felt like you could do and your survival instinct kicked in?” She hadn’t answered then and there. I thought she’d just chosen not to think about it.

But in the very last session she told me I’d “been right” in saying this. I reminded her I hadn’t said this – just asked her a question.

“That’s right.” She smiled, like the sun finally emerging from behind the clouds. “You asked the question, and last night I finally found the answer… I have too much love for my daughter and myself to carry on like that, because I am a good person.”

She came to that all by herself.

And you can learn more about treating depression with our How to Lift Depression Fast home study course, which gives you a structured approach. Read more about the course and sign up to be notified when it’s open for booking here.

How to Treat Insomnia: a 3 Point Checklist

“How do you calm an extremely depressed, crying and distraught person?”

How to Avoid Burnout When Treating Depressed Clients