Reflections on the implications of 5 psychological studies 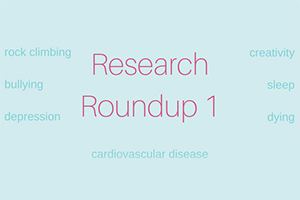 Long before Twitter necessitated brevity, it was in ancient Greece that Socrates uttered the concise words, “First know yourself.”1

Sages have continually uttered it over the millennia, but wherever this phrase originated, I think we need to heed its message as a matter of urgency.

Why do these words matter?

Because right now there is no excuse for the human race not to know itself. We are simply swimming in psychological research. The information is there. What remains to be seen is how we are going to apply that information. And here’s a thought:

Perhaps we have to know ourselves if we are to survive.

Understanding the human condition may not be a navel-gazing luxury but a staring-down-the-barrel-of-a-gun necessity. There are no guarantees the human race will survive.

The dinosaurs lived for 135 million years and left the Earth more or less as they found it. Human civilization, on the other hand, has been around for about 12,000 years – and it hasn’t always seemed that civilized. Make no mistake, we can destroy ourselves. We can destroy ourselves through anger, short-sightedness, or out-of-control groupthink.

But there’s something else.

Not waving but drowning

Yes, we have greater access to psychological knowledge than ever before. But we are also bombarded with it. “This study says that; that study says this!” We nod with interest, then we move on. It doesn’t change us or give us wisdom.

Now I understand that not all research is repeatable or even applicable, but much of it may simply be suggestive of wider psychological truths – and that’s what this series is about. I will summarize pieces of research and provide my own imperfect take on that research: what it might signify in a wider sense.

So with that as a rather grand opener, I want to highlight five recent pieces of  research and attempt to lend some context to them. There’s no overarching theme here – the pieces are pretty random. But hopefully I will cover quite a spectrum of interest.

Okay, let’s get started! This month we have:

Research piece one: Rock climbing is a great treatment for depression

You may laugh, but maybe it’s no more crazy than pharmaceutical or electric shock treatment. In one study, a researcher had depressed participants start bouldering, a form of rock climbing, and found a correlation between the activity and feelings of improved wellbeing.

If this is a genuine effect, why might that be?

I would suggest the following.

The researchers seem very enthusiastic about the antidepressant effects of bouldering, but I would suggest that any activity that produces the effects I’ve suggested might have similar benefits. Still, it’s great to see researchers considering an intervention that isn’t drug based.

When treating our clients I think it’s important to consider how emotional difficulties can impact physical health (and vice versa), especially in the long term. This interesting piece of research considers just that.

A recent article in Science Daily reports the following:8

An international study of more than 3.2 million people with severe mental illness reveals a substantially increased risk for developing cardiovascular disease compared to the general population.

Wow! That’s pretty scary. As the researchers posit, some of this may be attributable to prescribed medications and their side effects, including weight gain and appetite changes.

Well, undoubtedly weight gain can be dramatic when taking antidepressants and psychotropic drugs such as antipsychotics, and genetics obviously plays a key role, but I think there’s another factor that tracks right alongside cardiovascular disease: stress.

So rather than simply looking at people as a container for chemicals, we need to see them in their psychological and social aspects as well.

Stress is a central component of much mental illness, and long-term stress has consequences. We become stressed when we don’t meet our physical and emotional needs adequately and healthily.

Speaking of stress and not meeting emotional needs, a new study from the University of Delaware has found that children who are bullied in fifth grade are more likely to suffer from depression in seventh grade, and to use alcohol, marijuana or tobacco in tenth grade.13

This is a sad but not surprising report. Actually, I’ve seen another report suggesting that the pernicious effects of bullying can last deep into adulthood, severely damaging physical and mental health.14

Even more heartbreakingly, the new report finds that children who are already suffering from chronic illness are more likely to be bullied.

Other risk factors for being bullied include being male and being a “sexual minority youth”. No correlation was found between incidence of bullying and age, obesity, ethnicity, household educational achievement, or family income.

My take on this?

Well I think it’s pretty clear. We all have basic primal emotional needs. Bullying works by blocking the completion of these needs in others. We all have a need to feel:

The report suggests that interventions take place in schools, but doesn’t really suggest what those interventions might be. How do we tackle bullying? For a start I think children need to understand what it is, how it happens, and how we can mitigate its effects, but there are no simple answers.

This study on creativity and sleep quality caught my eye. Researchers at The University of Haifa compared art students and social science students, and found that art students sleep more hours, but the quality of the sleep is often poor.

In a report on the university’s website, Neta Ram-Vlasov, one of the authors, explains, “[v]isually creative people reported disturbed sleep leading to difficulties in daytime functioning”.15 Small solace for problem sleepers, although most people I know would probably exchange decent sleep for a bucketful of visual creativity.

Ram-Vlasov goes on to say, “[i]n the case of verbally creative people, we found that they sleep more hours and go to sleep and get up later. In other words, the two types of creativity were associated with different sleep patterns. This strengthens the hypothesis that the processing and expression of visual creativity involves different psychobiological mechanisms to those found in verbal creativity.”

Creativity is often defined in the literature as consisting of four main aspects:

The authors don’t draw any concrete conclusions as to why the two kinds of creativity, verbal and visual, seem to be associated with different kinds of sleep quality. They do suggest that “[i]t is possible that a ‘surplus’ of visual creativity makes the individual more alert, and this could lead to sleep disturbances. On the other hand, it is possible that it is protracted sleep among verbally [creative] individuals that facilitates processes that support the creative process while they are awake.”

But here are my ideas:

If REM sleep is somewhat suppressed, we might expect a greater sense of visual creativityClick To Tweet

So I suspect the reasons behind the findings of this study may lie in the REM state. Hypnosis seems to be a controlled way of tapping into waking REM states, which may be why visual creativity often seems to be enhanced via hypnotic experience.

This last piece jumped out at me because I had been in an email exchange with someone about their acute fear of and obsession with death. The person was young and healthy but couldn’t get used to the idea or thought of death. They got some solace from my article here. Coincidentally, a day after this exchange, a research piece came out in Psychological Science, a journal of the Association for Psychological Science.

Science Daily summarizes the article thus: “Fear of death is a fundamental part of the human experience – we dread the possibility of pain and suffering and we worry that we’ll face the end alone. Although thinking about dying can cause considerable angst, new research suggests that the actual emotional experiences of the dying are both more positive and less negative than people expect.”16

The research examined the writings of terminally ill people and those facing execution, and found that those facing death would often see wider perspectives than expected.

According to one of the authors, psychological scientist Kurt Gray of the University of North Carolina at Chapel Hill, “[w]hen we imagine our emotions as we approach death, we think mostly of sadness and terror. But it turns out, dying is less sad and terrifying – and happier – than you think … the final blog posts of terminally ill patients and the last words of death row inmates are filled with love, social connection, and meaning.”

Even stranger perhaps, the researchers found that people’s use of positive words such as ‘hope’ and ‘love’ increased as death approached, but the use of negative words did not.

Science Daily concludes that “the findings suggest that our expectations may not match the reality of dying, which has important implications for how we treat people who are dying.”

Well, the authors of the report admit that they didn’t study people dying of old age or facing huge uncertainty as to whether they will die or not. But I still think it’s very suggestive. So what might it suggest?

The concept of a mysterious mechanism in the mind (like the dream reality so often experienced during emergencies) that prepares us for death is intriguing. There are many anecdotal reports of near-death consciousness, going down a tunnel or passage toward a bright light, feeling reconnected to loved ones and so forth which are also suggestive that dying is not the experience many expect.17

Or perhaps we become forced to see the bigger picture when the end of our time is close. There may be more inside of us all than we realize.

Anyway, I hope that you’ve enjoyed this random sample of recent psychological research and that I helped connect it up to bigger patterns of understanding – at least a little.

Research Roundup 6: Redefining Problems, the Benefits of Rising Early, and Why Social Bonding Can Lead to Violence