During a Q&A call as part of our How To Stop Anyone Smoking course, I discuss the psychology behind preparing smokers to quit quickly 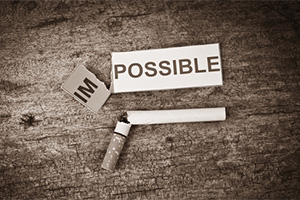 I recall a hypnotherapist who worked near me who would charge a great deal of money to help smokers quit.

That’s fair enough, of course. I mean, how much is 10 or 20 years’ extra time on this Earth worth?

But he insisted they would need ten sessions. Payment in advance, thank you very much.

This makes no sense!

Sometimes I would pick up the ones who had seen him but not actually managed to quit. They’d come along expecting to see me for multiple sessions spanning many months. I never got sick of seeing the amazement and disbelief filter across their smoke-coarsened features as I explained that we could, and should, do it in one session!

Why stay in the trap when the door is open?

It used to take months to sail from England to Australia; now we can get there in a day. Times move on. No matter how long you think it could or should take to quit, if you have the opportunity to do it here and now, why hang around?

When a smoker has fallen into the trap of believing that freedom from smoking must be drawn out and gradual, I’ll often ask them to think of it like this:

Get out while you can.

If you were stuck in a prison cell and someone came along and said you can leave today, would you insist on leaving over a period of three months?

Worse, what if you were on death row? If your execution date was set for next week, you wouldn’t think twice about getting out of that trap as fast as you could.

The fact is, when we know what we are doing, we needn’t – shouldn’t – waste time. The clock is ticking, and 6,000 malicious, toxic chemicals are corrupting.

The escape needs to happen now. And research bears this out. Quitting smoking abruptly is more likely to lead to lasting abstinence than cutting down first, even for smokers who initially prefer to quit by gradual reduction.

It can only do more damage to linger in a house that, after all, may already be on fire.

If cigarettes could talk…

And now I’m going to invoke a famous movie cowboy:

So said Clint Eastwood’s character William Munny in the 1992 Western The Unforgiven. If cigarettes could speak, they might say something similar.

Of course, it’s not just men. The rate of smoking in women is rising, and showing no signs of slowing down. All in all, one billion people are set to lose everything they’ve got and everything they were ever going to have because they fell into and didn’t get out of the trap of smoking.

Don’t linger! If you’re ever to escape this trap – a trap that threatens to take everything you have – get out now. Get out while the door is ajar, and never look back. This is the message I want to impart to all smokers.

Here’s an excerpt from a recent Q&A session I conducted with our How to Stop Anyone Smoking course delegates. In my answer, I talk about preparing smokers to believe they can quit in just one session. You can listen to the Q&A at the end of the article, or read the transcript below.

Question from Jason from Denver:

“Hi, Mark. I’ve only completed sessions 1 and 2 of the training, so apologies if you will get to this, but some smokers come in and don’t believe it’s possible that they can stop in just one session. Perhaps you could address how to work with this belief.”

“I mean, personally, I don’t find that tends to be a huge problem, or not many smokers kind of express too much doubt about that, but it certainly can happen.

I guess it doesn’t happen too much for me now because I have seen so many smokers who’ve stopped in one session, and many of them are referrals from people they know who’ve stopped smoking with me, so it’s kind of what they expect, but I like to work quickly with smokers.

So I’ll suggest that many people can escape smoking very quickly once the prison door is unlocked. Many people can stop after one session, but there’s always the exception.

So this uses the rule of many to help a person feel it’s actually more natural to stop in one session than in multiple sessions.

It’s a bit like with Post-Traumatic Stress Disorder. People can express scepticism that you can help lift that PTSD, especially from a one-off trauma, in one session.

You can say, “How long did it take you to become traumatized?” It may have been a 30-second car crash, or it may have been a 3-minute assault, or a 10-minute assault. And you learned that very, very deeply, and very quickly, that trauma, that PTSD, and your brain learned to have flashbacks and nightmares for 30 years, in just a few seconds or a few minutes.

Us spending an hour on this, the brain learns very, very fast.

In a way, with the smoking, it may only be one session with you, but they’ve had lots of instances in the lead-up to seeing you, unless someone else had dragged them along to see you.

Maybe over several years they started to doubt the relationship, started to question whether smoking really is for them. So lots of the work happens before they come see you, in a sense. You can reassure them of that. Times when they’ve wanted to leave the relationship, to quit and walk away from it.

When they come and see you, they have on one level already decided to leave smoking, and that may have been quite a lot of unconscious preparation they’ve been doing. All you’re doing is helping them break away. You’re the sort of tipping point at which it can actually happen in the moment.

Act upon a decision already made

If they want to draw it out, in a way it’s like the person who’s stuck in a relationship with someone who’s agreed to separate, but keeps telling them, “Okay, not yet. We will separate, but I can’t move out at the moment.”

Actually, when the decision has been made, we really don’t need any more excuses. They’ve already decided to leave, and all the session does is make them feel easier about it.

Once the prison door is open, there’s no point in just sitting there, especially if the executioner may still be wandering around – which is an analogy you might use with a client, in or out of trance. The time is now, because it’s always later than you think.

Overcoming the power of “now”

The thing is, with optimistic distortion, smoking is a very now-centred thing. When you smoke, there’s only now.

If you tell a 16-year-old smoker that by the time he’s 40 his lungs are going to be terrible, his sexual prowess will be dented, he’ll look older than he is… 40 to a 16-year-old is like talking about the other side of the moon! It’s such a long way away.

Smoking is all about now. It’s a greed instinct. It’s a ‘now is all that matters’ idea. ‘I want it, and I want it now, and nothing else matters.’

Even talking about next year might not have an effect, which is why part of our hypnotic work needs to enable the person to have a greater sense of unconscious urgency about escaping.

Beware of the tipping point

If you watch the session inside the How to Stop Anyone Smoking course where I help Linda stop her 20-a-day habit, when she’s nicely entranced, I talk about the straw that broke the camel’s back.

This is a well-worn metaphor and many people are familiar with it already.

The fact is when you smoke a cigarette, unless it’s your very first cigarette, you never just smoke one. That’s an illusion.

If you think about it logically, there’s always a tipping point. If somebody does fall into irreparable damage from their smoking, it will be one cigarette that tips them over that edge.

But it’s the one on top of all the tens of thousands of other cigarettes you ever smoked in your life, you ever allowed into yourself, that will do the irreparable damage. It’s a pathway to regret, really.

Quite often, the smoker will wrinkle up their nose in disgust.

And what would all those rotten cigarettes from the past 20 years look like together in one pile? All the ones you’d ever allowed into yourself?

Maybe you can even sense it, maybe that’s why you’re here, because you started to sense it getting more unstable.

You just don’t know which one it’s going to be that’s going to topple all of that over and bury everything. But it’s that one that tips everything over and ruins everything, and it could be the next one you were going to have if you hadn’t come to see me.

It could be in a week’s time or a month’s time, but there is one that has your name on it.

It’s just one straw, just one cigarette. That straw, placed on all the other straws, breaks the camel’s back. But how wonderful it would be to get rid of that before it’s too late.

If someone is dilly dallying about stopping, what they need to supply to their unconscious mind is a sense of urgency.

As a thought experiment, and again, I wouldn’t necessarily say this to a client. But if someone knew for certain that the very next cigarette could kill them as certainly as swallowing a cyanide capsule would kill them instantly, then where would that physical addiction go for a start?

How many sessions would they then think that they needed to quit, to escape that?

So, although we’re indirectly treating smoking, we want to get the person connected to their future selves, because smoking hypnotizes people in the present, and they’re just living in the moment. Tomorrow be damned.

We want to give them a wider context, not consciously, but within their unconscious mind, so they can think, ‘this one that I’m smoking now is connected to all the ones I’ve ever smoked, and in some ways connected to the last one that I’ll ever be able to smoke – and it might even be this one’.

That’s kind of what we want to embed and imbue. And you’ll see me doing that with Linda in the video available in the How to Stop Anyone Smoking course.”

And you can listen to the audio from this Q&A excerpt here:

Read about ‘How To Stop Anyone Smoking’, my online home study course »

“If a client says they are stressed should one first help them gain control, prior to helping them stop smoking?”

Is Addiction Physical or Psychological?