How regularly feeling grateful can help your clients feel better 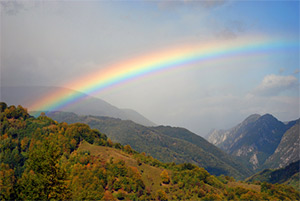 People often say that we in western modern societies have it really easy. That we have ‘First World’ problems.

A middle class guy worrying about where his life is going as he turns forty might seem ridiculous to a man who’s wondering if he’ll be alive tomorrow, or whether he can feed his family for another week. He might feel that someone who’s sure that he is going to turn forty is terribly lucky, when he himself can only focus on day to day survival.

People who suddenly find themselves facing real problems often start to wonder how they could ever have got so worked up about what they thought were problems before. I recall a man who developed an aggressive and terminal cancer telling me wistfully how amazed he was at how worried he used to be about stuff that now seemed like nothing to him.

He used to fret about whether he should be doing this job or that job, or dating this or that woman, or what he was going to do with his life. He told me he now felt like he had never before had a single genuine problem in his life – or certainly not one that required so much hand-wringing and fretting, anyway.

You often hear people use the term ‘the worried well’, which refers to people who don’t need medical treatment but who visit the doctor for reassurance, or with emotional problems.

These are people whose problems would not seem at all ‘real’ to certain other people, or whose problems would likely be diluted to vanishing point if they were to find themselves in terrible Third World conditions where minute to minute physical survival was the only pressing issue.

These obvious if rather uncomfortable facts lie behind well-meaning advice like: “Some people are worse off, you know!” or “You should be grateful, you could be starving or in a war zone or have some terrible disease!” People giving this kind of advice often appeal to history, as in: “Imagine if you’d been Jewish under the Nazis, or a Tutsi in Rwanda during the genocides there!”

Whose life is it anyway?

The awkward thing is that people who dish out this kind of platitude are not wrong. In a way. But they are wrong in the sense that this kind of ‘think yourself lucky’ approach seldom actually makes anybody feel any happier. Guilty, yes, but not happier.

The 'think yourself lucky' approach seldom actually makes anybody feel any happier. Guilty, yes, but not happier. Click to Tweet

You see, it’s not as if the guy who’s constantly worrying about the state of his marriage, or the woman who has a terrible phobia of elevators or social events, is unaware that some people are starving or facing execution and so on. Of course they are, but that awareness doesn’t often make a difference to them because they are in their life.

The fact is that fear, anxiety and hopelessness are correlated with life circumstances, but only up to a point.

What I mean is that living in a nice safe environment is correlated with feeling safe and secure, but the correlation isn’t as exact as you might think. I’ve worked with housewives whose terror of their next panic attack was no less than the terror of the guy who’d been kidnapped in Nigeria and believed he was going to die.

Fear is fear, whether it’s fear of starvation or fear of white collar bullies at work. Someone who is frightened or depressed in an outwardly perfectly safe and secure environment still feels as if they are living an unsafe life, and that’s what they need help with.

But I don’t want to throw the baby out with the bathwater here. While making people feel bad for feeling bad doesn’t tend to do anything other than add guilt to their miseries, there is something to be said for practising gratitude and reflecting on comparative difficulties.

From Buddha to Cicero, many philosophers have celebrated gratitude and the world’s great religions, including Christianity, Hinduism, Islam and others, have all at various times promulgated the idea that being grateful encourages reciprocal kindness, as well as individual and collective well being.

Research studies on gratitude have found that people who are encouraged to reflect regularly on what they can be grateful for enjoy increased alertness, enthusiasm, optimism and energy. In one study with hundreds of participants, the gratitude group experienced less depression, exercised more regularly and made more progress towards personal goals. According to these research findings, people who feel gratitude are more likely to feel loved and respected than the non-grateful. They also showed better immune function and less physical illness! (1)

So rather than just noting the bare fact that there are people physically worse off than us, it may be better for us to actively focus on what we do have, so that we start to actually notice and appreciate that we have access to clean water, or the internet, or other people who aren’t trying to kill us, and so on.

Of course everything is relative. If you’re earning 200,000 in a year you can feel hard done by if you know someone on 400,000 a year (choose any currency). Your bad feeling comes from focusing on what someone else has that’s more than what you have.

If you see clients who need help focusing on the positive, here’s a useful therapeutic exercise you can use to help them feel better.

A therapeutic exercise to help your client practise gratitude

Next time your client feels really worried or down, encourage them to think of three ways in which it could be even worse.

I don’t mean think about how other people have it worse in other parts of the world, but how it could be but isn’t worse for them.

So if they feel bad because (let’s say) a friend snubbed them, then get them to think:

Then spend a couple of minutes really imagining not having these things. Really imagine the full reality:

of being in the condition of having absolutely no friends, or no food, or nowhere to sleep, or no whatever it is.

Now I don’t normally tell people to imagine things being worse! But weirdly, doing this can be a powerful way for your client to feel better with what they already have.

But remember, for this to work your client needs to actually imagine, just for a few moments, the reality if things were worse.

Please don’t get them to reflect on what they’ve actually been worrying about. If they really have been worrying about ending up with no money or no food or no friends, then don’t choose those. Always pick something that would be worse but they feel won’t actually ever happen, or is unlikely to happen.

Of course, this isn’t a way to cure clinical depression, but it can be a really good habit to get your client into to keep a sense of perspective as they travel through life. Your client will find it really powerful and also strangely mood enhancing as it improves their emotional resilience.

“Some people grumble that roses have thorns; I am grateful that thorns have roses.”
– Alphonse Karr

How To Stop Your Clients Catastrophizing About The Future