Back to Top
Mark Tyrrell's Therapy Skills » PTSD, Trauma and Phobias » PTSD And Depression – Is Trauma Locking Your Client In Depression?

PTSD And Depression – Is Trauma Locking Your Client In Depression? 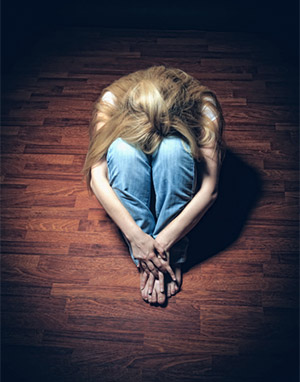 Trauma can often be behind the dark pit of depression

Sam was deeply depressed when she came to see me. I asked her why she thought she’d become depressed recently. She seemed shot through with sadness.

“I don’t know, really… It doesn’t make sense. I have everything to live for! I have a wonderful boyfriend, a great job, lovely friends, but I’ve started feeling really afraid… no, more than that, actually terrified. I’ve been signed off work with ‘stress’ and I’ve stopped going out at all. I just want to stay at home, with the door bolted. It seems like I can’t escape these feelings. I’m starting to feel as though I have nothing to live for… and that’s just not true.”

“How long have you been feeling depressed, Sam?”

“Did anything happen around three months ago, anything that was out of the ordinary for you?”

Sam’s brow furrowed with the effort of thinking back across the miserable weeks.

“Well, I was involved in a minor car accident around then. But it really wasn’t anything serious. I just dented my car in a parking lot. Silly thing to do.”

“And it was after that that you started to feel anxious and then depressed?”

“And had you ever been in any other kind of car crash before that minor incident in the parking lot three months ago?”

A shadow crossed her face as I put this question. She suddenly looked older, weighed down by some invisible burden.

“Yes, I have. Ten years ago, I was quite badly burned in a car crash, mainly my legs. I was trapped and lost consciousness. I don’t remember being hauled out of the car. The driver, my boyfriend, was killed.”

She paused, and then said in a small voice,

“But that was so long ago…”

“Now, Sam this little collision you had a few months back… how did it affect you?”

“Well, I was surprised, really. I found myself crying about it afterwards, and felt really badly shaken up, even though nothing serious had happened. I started having nightmares about that time again, like I had for years after my boyfriend died.”

We talked about this some more, and Sam agreed that it was possible that the very minor collision she’d had (in which her car had been only slightly scratched at low speed) may have reactivated traumatic feelings around the decade old trauma.

I decided to go for the trauma ‘litmus test’.

“Sam, when you recall the crash from 10 years ago now, does it make you feel frightened in the here and now to remember it…? Just do that for a few seconds… just recall that old crash.”

Sam turned pale and began to tremble. I quickly encouraged her to refocus her attention on me and ‘come out of it’. I am not in the business of making my clients feel anxious.

Sam told me that the memory felt as fresh as if it was from yesterday, and that she was ‘right back there again’ whenever she thought about that crash or anything reminded her of it.

It seemed to me there was no other reason why Sam had become depressed.

Her emotional and physical needs were being met in her life, she had not been particularly worried about anything, and then, after a minor scrape in her car, her life started to fall apart.

For around 75% of people who experience a trauma, the effects will naturally fade in time. But for the remaining 25% there will be enduring effects from the trauma unless effectively treated. And that’s where PTSD and depression become linked.

Here’s three reasons why unresolved trauma may tip someone into clinical depression.

Depression rides off the back of anxiety and stress.

All depressed people are pumped so full of the stress hormone cortisol that eventually they become exhausted, and feel hopeless and powerless. Without heightened stress levels in the body there cannot be depression. (1)

Sustained or chronic stress leads to:

Unmanaged stress, particularly unresolved trauma, blocks the working of these chemicals which, among other things, regulate vital biological processes like sleep, energy, sex drive, and appetite, and also permit expression of normal moods and emotions.

When the stress response fails to shut off and reset after a difficult situation has passed, it can lead to depression in susceptible people.

All depression treatment needs to include relaxation training to help people bring down their stress levels.

But feeling traumatized also results in another phenomenon that is often a key factor in depression.

People can survive any deprivations and stresses if they feel they can surmount them. It’s when people feel helpless that they feel hopeless.

We all need to feel we have some control over at least some parts of our lives. So feeling that we have no control, and are powerless and helpless, is hugely depressing.

‘Learned helplessness’ (feeling helpless when you’re not, because you were helpless in the past) is a major feature of many depressions. This kind of learning makes people more susceptible to depression, and learned helplessness may have to be specifically ‘unlearned’ in treatment.

When people are traumatized, their emotions also feel totally out of control. For all those years following that tragic crash Sam would have felt emotionally vulnerable as different elements of life ‘pattern matched’ to her original trauma, and made her feel powerless again. She hadn’t spotted this consciously, but the unresolved trauma made her more susceptible to depression.

We all have needs to:

Continuing to be traumatized long after a distressing event makes us feel powerless and avoidant. But if we start to avoid things that might actually help us to meet our innate needs, such as company, intimacy or fun, we are at increased risk of depression.

This is how trauma can block the completion of these needs and both cause and maintain depression.

It’s not always about trauma

People depress for all kinds of reasons, and we should never assume that unresolved trauma must be a cause. Going off looking for ‘traumas’ that just aren’t there can make ‘therapy’ quite toxic for depressed people whose depression has a different cause.

However, trauma is sometimes a major factor in depression, which is why

are vital skills for any therapist.

By the end of Sam’s session, after using the Rewind Technique, she was able to think about the crash from ten years before while feeling quite calm. She said to me:

“I’m sad about what happened, but I’m so glad to finally feel like it’s properly in the past.”

Sam’s depression lifted almost as fast as it had begun, as the heightened stress caused by the reactivation of the previously unresolved trauma was no longer there to maintain the depression. She started going out again, went back to work a few days later, felt safe at last and started having the life she should have had all along.