Back to Top
Mark Tyrrell's Therapy Skills » Depression » Should Hypnosis Ever Be Used to Treat Depression?

Should Hypnosis Ever Be Used to Treat Depression?

(Or why I went against the advice of my psychiatrist boss) 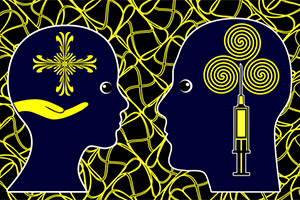 When used constructively, hypnosis can be an effective tool in delivering therapy to depressed patients

“Hypnosis should never be used with a depressed person!”

The elderly psychiatrist roared at the patient’s mother, his thick-rimmed glasses quivering atop his nose.

These were the days I worked as a nurse in a psychiatric hospital – days smudged with gloom in my memory, but full of amazement too.

The other nurses and I gathered around the psychiatrist: the unassailable chief of our tribe. The god of our religion. This was a progress meeting to assess the needs of the patient, a young man in his twenties named Kevin.

Kevin’s head sunk towards the floor. He looked pained and embarrassed as we spoke about him but never to him.

Kevin’s meek mother clutched her handbag as she said that her son had tried one hypnotherapy session at home over the weekend. She tentatively reported he’d felt really good afterwards, “so relaxed”, almost like his old self.

I knew nothing about hypnosis and held the psychiatrist on such a pedestal that it never occurred to me he could be wrong.

Mind you, I did start to question him later when he stated that, like Sigmund Freud, he believed patients who reported having been sexually abused as children were merely expressing repressed sexual desire for their parents through fantasy and that their reports of having been abused were merely their own fantasies coming to light!(1)

Anyway, I swear his finger actually wagged at the poor woman as he lectured her on the “grave dangers” of using hypnosis in cases of depression. He didn’t say why or what the nature of these dangers might be. But his sense of certainty had us all in his thrall.

And so Kevin’s drug dosage was increased.

The old view was that hypnosis should never be used with a depressed person. But this idea missed something really important.

Hypnosis is not actually a therapy. It’s a state of mind and body in which learning takes place quickly and thoroughly. Hypnosis can be used as a ‘delivery system’ for therapy to make it more powerful.

And hypnosis is only as effective as the therapy it delivers. Of course, it also depends how hypnosis is used. More on that in a moment. But there’s something else, too.

Depression is already a sort of hypnosis

A depressed person is, from one perspective, already in hypnosis. Some of the severely depressed patients I recall from my time in Acute Psychiatric naturally exhibited many of the features we see in hypnotized subjects.

This is a rigidity or disinclination to move the body. It happens to all of us when we dream at night during REM. Our anti-gravity muscles become ‘paralyzed’ to prevent us actually acting out our dreams.

Catalepsy sometimes occurs spontaneously in hypnosis. The person becomes very still or responds easily to the suggestion that an arm will become numb. Because catalepsy happens naturally during hypnosis, it can be utilized easily for pain control or as an organic metaphor for ‘immovable determination’ and the like.

But some depressed patients show signs of catalepsy too. They might feel emotionally numb or sit for hours in exactly the same position (especially when in deep or ‘clinical’ depression). It’s fascinating that this is essentially an hypnotic feature.

Another thing depression has in common with hypnosis is the narrowed inward focus.

During hypnotic trance (which can be deeply pleasurable and therapeutic), our attention turns inwards as our perception of the outside reality fades away.

This happens to all of us in nature’s deepest trance: when we dream at night. As you fall into the REM state, your focus becomes exclusively attuned to the contents of your imagination, to the extent that your imaginings become 100% real to you. Your bed and the room you’re dreaming in become no more than a distant memory.

Depressed people often look glassy-eyed and report feeling disconnected from the real world. They experience a feeling of unreality or ‘derealization’. They will often be very inwardly focused, ruminating on the contents of their imaginations and creating hopeless or fearful scenarios about the past, present, and future.

Sure enough, this is a feature of hypnosis too, in which inner focus overrides outer focus.

Clearly, hypnosis as a mechanism to deliver therapy is likely to resonate strongly with depressed patients who are already experiencing some features of the trance state.

So why was the psychiatric establishment so dead set against it?

More of the same misery

Back when Kevin’s psychiatrist was trained, the psychotherapy of the day was analytical. The patient was encouraged to focus on the unchangeable past. Sessions involved dragging patients through their pasts to ‘get in touch’ with ultra-painful feelings and memories.

This ideology favoured the idea of ‘cathartic collapse’, in which the client was essentially re-traumatized. This was thought to lead to ‘release’ and therefore better mental health. In reality, it was a very painful process.

Now if hypnosis were used as the ‘delivery system’ for this kind of therapy, leading to uncontrolled cathartic collapse, it could indeed be catastrophic for the patient. Depressed patients can certainly be worse off after receiving hypnosis as part of such a scary therapeutic model. And there’s a good reason for that.

Depressed clients already exclusively focus on painful memories at the expense of better ones. They are already likely to have lost perspective through over-rumination and analysis of ‘why things went wrong’(2).

So if the therapy is focused on bringing up lots of painful memories, essentially giving their feelings of misery a ‘booster’, it’s no wonder depressed clients could suffer.

Hypnosis simply powers and magnifies whatever therapy is being given through it. That’s why much of the advice about not using hypnosis for depressed patients was quite right: the type of analysis being used was, from a modern perspective, toxic for depression anyway.

Likewise, it’s no surprise that another anti-therapeutic use of hypnosis caused more problems than it solved.

When the aim of therapy was to find out what happened or ‘release suppressed memories‘, there was no way applying hypnosis could turn out well.

So the question remains: Can we use hypnosis constructively with depressed people? And if so, how?

Hypnosis, not as a therapy but as a ‘delivery system’ for therapy, is only as good as the competence and practice of the clinician delivering it. If the therapy is positively orientated, enabling, constructive, and solution-focused, then hypnosis can magnify those benefits hugely.

I’m glad to say that psychotherapy has progressed tremendously since my days nursing patients like Kevin. This is good news for depressed patients, who can finally access the powerful healing hypnosis can deliver.

Depressed people are stressed people. We know this objectively, because they have higher levels of the stress hormone cortisol in their bloodstreams(3).

So any treatment for depression should include deep rest and relaxation to give the client a break from the exhausting effects of depression. Hypnosis, one of the most soothing, relaxing experiences available to our patients, should not be overlooked for short-term relief.

Hypnosis can also be used to help reframe past events constructively, and rehearse new ways of feeling and thinking. It can calm the brain down enough to start to feel hope and set realistic goals.

Hypnosis may not be the active ingredient, but it is a part of therapy – often a vital part, helping important messages hit home.

Those who don’t understand the fundamental nature of hypnosis and its role in learning, healing, and overcoming emotional difficulties, may still talk of contraindications.

But what they may not realize is that any therapy, including the old school analytical kind, is, in a way, hypnotic. If it gets clients to narrow their attention to feelings or something beyond the immediate, such as an imagined future or a remembered past, it is effectively a form of hypnosis.

Practitioners themselves may not understand the hypnotic elements in their own work – indeed, often they have no idea.

In fact, looking back, I’m sure Kevin, as he sat there surrounded by authority figures, frozen still with his eyes fixated on the floor, was in a kind of trance.

But alas, not a good one.

You can learn a structured approach to treating depression quickly and effectively with our How to Lift Depression Fast course. Click here to be notified when it’s open for booking.

And if you’ve already used hypnosis to treat depression, share your experiences with other practitioners in the comments below.

(1) Sigmund Freud initially believed that reports of childhood sexual abuse from patients were genuine but then abandoned this ‘seduction theory’ in favour of believing that abuse memories must be infantile fantasy. https://en.wikipedia.org/wiki/Freud%27s_seduction_theory

How to Avoid Burnout When Treating Depressed Clients

4 Ways to Use Behavioural Activation to Help Your Depressed Clients