How to Use Hypnotherapy to Treat Overeating 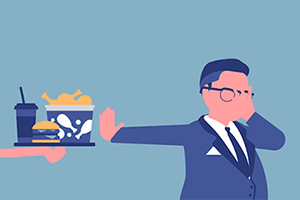 Like a bully who loses interest when you no longer react to them, food cravings will leave us alone very fast if we can just hold our will for a short while.

“I drink buckets of water to fill up my tummy…”

“Until I go to the bathroom. After that I go right back to snacking.”

Sounds about right! There are so many baseless tactics, tricks, and tips out there, all with the same end in mind: to master out-of-control snacking. And the aim of that?

To look better, to be slimmer. For some this may be more important than becoming healthier.

For Katie, while her goal had been to slim down, now she’d been shocked into a whole new focus.

Now Katie had to do something about the snack attacks that napalmed her good intentions and sent her careening along a sugar roller coaster.

She’d come to see me for help.

Give me a reason

“My dad died of diabetic complications… after going blind! I don’t want to go the same way.”

Katie now felt she had a reason to permanently ditch the sugar and refined carbs.

She’d always felt she should eat better, but knowing we should do something and actually wanting to do it can be poles apart. Besides, now the habit was so baked in (if you’ll let that pun pass!) that Katie feared she couldn’t stop giving in to those pesky cravings.

For the first time, she truly wanted to change her approach… but felt it had her in its sugared and sticky clasp.

But we know people can change. We know that what at one time seemed like an intractable problem can shift, alter, and even disappear for good. And Katie now had great motivation, which made my job much easier.

I’ve written before about strategies for losing weight (here and here) and also about the addictive mindset.

But here I want to give you three scientific approaches I used to help Katie deal with cravings, and an idea of how I personally convert these tips into hypnotic procedures.

Tip one: Remind them that if they don’t use it, they’ll lose it

Yes, really! It’s a simple fact that the more we do something pleasurable, the more we want to do it. But the opposite holds true too.

The less we do something, the less we want to do it. If you don’t use your love of chocolate caramel shortbreads mid-morning, you start to lose it – the desire, that is.

I’ve heard variations on this so often, as perhaps you have too.

The fact is, cravings can and do fade – and simply reassuring your clients of this helps them.

A recent literature review of research into food cravings concluded that “[f]ood craving reductions are because of reductions in the frequency of consuming craved foods.”1 What we don’t have, pretty soon we don’t miss (unless it’s a genuine need).

One tip the study authors suggested is to completely eliminate the craved food from our diet. If we can do that, often we find that when we do eventually have a cigarette or consume a piece of cake again, it tastes rough or sickly sweet and we wonder how we ever consumed it before.

When Katie asked me plaintively, “Will I always have the cravings?” I told her about this research, and how if you don’t feed a parasite it drops away fast.

So reassure your client that, like a bully who loses interest when you no longer react to them, the cravings will leave them alone very fast if they can just hold their will for a short while.

Like a bully who loses interest when you no longer react to them, food cravings leave us alone very fast if we can just hold our will for a short while. Click to Tweet

Then, use hypnosis to help your client get a sense of not having engaged in the old cravings for a very long time through a sort of age progression.

I hypnotically progressed Katie to six months in the future, when she hadn’t eaten sickly sweet stuff for a long time, and encouraged her to notice what it felt like to wonder what she had ever seen in all that sugar.

This next tip is vital for all aspects of physical and mental wellbeing.

Tip two: Sounder sleep for a slimmer self

I asked Katie how her sleep was.

“Terrible!” she replied in a way that implied she perhaps couldn’t understand why I wanted to talk about sleep when she wanted to talk doughnuts and diabetes!

“I only ask because,” I continued, “research has found that when you sleep better you have much better control of cravings.”2

Now I had her interest again.

“I toss and turn and can’t sleep at night!”

Desperately trying to expel the lyrics of ‘Tainted Love’ from my mind, I asked her why.

“And what time might you be snacking and drinking coffee till…?”

Okay, we had some serious work to do!

I set a rule that over the next week she was not to drink coffee after 2 pm. “While you’re tapering out the diabetes fuel, you can still snack – but with a glass of water.” I held her gaze and repeated that I meant it.

She said she would do this, and I believed her. We then went on to work on other issues surrounding her sleep.

The following week she reported her sleep had massively improved. As a result, she felt calmer generally and more able to cut down snacking – by over 70%, in fact! This was partly because she hadn’t enjoyed snacking in the same way when drinking water instead of coffee.

During trance I encouraged Katie to not only have a good wind-down routine before going to bed, such as switching off social media 2 hours before bed and reading instead of gazing at electronic light. But I also used hypnotic rehearsal, guiding her to pre-experience falling asleep fast.

This final tip involves the time after a good night’s sleep.

Following her terrible night’s sleep, Katie would invariably skip breakfast and slurp coffee instead. Perhaps she thought the missed meal would help counter the excess calories from snacking. But on the contrary, a recent study shows that eating a good breakfast, especially one rich in protein, boosts a vital neurotransmitter called dopamine, which seems to lower cravings right through to lunchtime.3

When we eat, it triggers a burst of dopamine, which gives us the feeling of reward. This mechanism is blunted in people who snack a lot on sugary foods, which means it takes a much greater stimulus to elicit this feeling. They have to work harder – that is, snack more and more – in order to get that sense of reward.

Dr Heather Leidy, the lead author of the study, said:

“Our research showed that people experience a dramatic decline in cravings for sweet foods when they eat breakfast. However, breakfasts that are high in protein also reduce cravings for savoury – or high-fat – foods. On the other hand, if breakfast is skipped, these cravings continue to rise throughout the day.”

Because Katie wanted to reduce snacking all round, not only the sweet stuff, she started eating high-protein breakfasts such as omelettes with peppers or scrambled eggs with basil, spinach & tomatoes. Yes, she really was that detailed in her planning with me!

I hypnotized Katie deeply and had her visualize herself preparing and consuming breakfast each morning. Research has found that visualizing ourselves engaging in some activity from an observer position makes us more likely to engage in that behaviour.4

Further to these scientifically established interventions, I discussed with Katie her emotional needs and we devised ways to help her meet them in ways that didn’t involve her reaching for the sweet stuff.

Some of her snacking had been emotional eating, so helping her deal with her emotions – which were, of course, linked to her needs – also helped negate the desire to blindly reach for the sugar.

I used the tipping-point technique as described in this article and generally helped her feel confident she really could be her own person and not be pushed around by the promptings of sugar-laden fat promoters.

She felt she had more autonomy over her own actions, and this rippled out into a greater sense of confidence in many areas of her life.

Her blood sugar readings fell to much more acceptable levels, too.

Ultimately, when clients meet their needs adequately, including their physical and emotional ones, the raison d’être of snacking falls by the wayside.

“It’s like the guy I had a crush on when I was 17 who now I can’t believe I even liked! I mean, what did I see in him! The thought of unhealthy snacking doesn’t even appeal to me anymore.”

What once mattered so much can quickly become inconsequential. What irked us unceasingly can simply fade into oblivion.

How to Integrate Hypnosis Into Your Therapeutic Work

If you’re interested in learning more about how hypnosis can augment and enhance your work with clients, you can read more about Mark’s online course Uncommon Hypnotherapy here.