How to Treat Compulsive Shopping

5 steps to help your client escape the spending trap 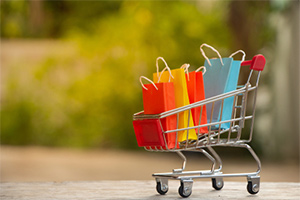 When treating compulsive shopping, identifying the needs the habit is trying to fulfil is a useful first step

“I can resist anything except temptation.”

It is easy to resist temptation when it’s not there. We can all eat sparingly and avoid refined sugar when we’re stuck on a desert island.

You might, if you are as old as me, recall those distant, digitally unstimulating times before you could access your bank account with a click at 2 am and splash the cash with a mere flick of your avaricious index finger.

Actually, I’m so ancient I can recall not being able to shop on a Sunday! That’s right – actually not being able to buy stuff. Why, some shops didn’t open all day! It’s a kind of historical horror story to tell the young folk.

But now of course we have the luxury of being able to send ourselves to the verge of bankruptcy without the inconvenience of having to wait for stores to open. Without even having to leave the sofa!

I suspect this increased opportunity and ease of spending is the reason compulsive buying has increased. It does seem that it’s more of a problem for young women1, and reports estimate that it may affect around 5% of people in industrialized countries1. This may not sound huge, but it amounts to many millions of people who cannot control their spending.

June came to see me for a filmed session for Uncommon Practitioners TV. For almost two years she had been coming home from work, sitting on the sofa, and surfing for ‘bargains’. If you’ve seen the session you’ll know she was spending up to £1000 a month on anything and everything – nail varnish, cleaning products, stationery, shoes.

I asked her where the ‘buzz’ was, and she told me she got a thrill from hunting for a ‘bargain’ – and a second buzz when the items were actually delivered to her home. A double dopamine hit.

But she got no pleasure from actually owning the items. In fact, for the most part she didn’t even seem to use them. They were good for cultivating cobwebs and not much else.

The problem had in some ways changed over time. She told me that she never used to send shoes that didn’t fit her back, but now she did – because she is “becoming more aware” of her financial situation.

I asked her what else her hard-earned money might be used for. She told me she could spend it on her grandchildren, or use it for experiences rather than just for diminishing the storage space in her home.

Here are five ways I helped June. You may find them useful when treating clients not just for compulsive shopping, but for any compulsive behaviour.

1. When did it start and what is the need?

June’s bank account had been leaking cash through these splurges three or four times a week for around two years.

“What happened two years ago?” I asked her. She told me that she had begun to compulsively shop around the time she started her new job. Ah!

I asked her about the job, and she told me it was extremely stressful and involved some horrible things, but she couldn’t tell me (or anyone else) anything more for confidentiality reasons.

When I asked her if she tranced out or ‘escaped’ when shopping, she said she did.

Always ask when the out-of-control spending began and what, if anything, changed during that time. So often a problem pattern is a sloppy and unconscious way of trying to meet a primal emotional need.

In June’s case I suspected the out-of-control spending provided a sense of escape from the realities of her job and a fleeting sense of meaning and excitement. Surfing for bargains felt meaningful because it felt as if she was completing a ‘hunt’ – ‘making a killing’, so to speak.

But what other needs might compulsive shopping be sloppily trying to fulfil?

2. What missing needs is the behaviour seeming to meet?

June told me without my even having to ask that she felt she knew what was missing in her life: “I need to be connected to people more, and also to nature.” We talked about how she might meet these needs in more legitimate ways, because certainly June needed something real and fulfilling to replace the gap in her life that not compulsively shopping would create.

Once we get a sense of what might be missing (and how the compulsive behaviour may be hijacking that need) then we can begin to work with our clients to find healthier, and in June’s case cheaper, ways of meeting those needs.

Next we need to know exactly how the problem works.

3. Teach me to do your problem!

When working with any compulsive behaviour I want to know when it happens, for how long, and what makes it stop. Why don’t people just binge or spend forever? What gives first? Energy levels? Stomach capacity? Bank balance? Or does the enjoyment finally evaporate?

We need to help the client help us understand their problem to the extent that we too could do it. We do this by asking them for the specific steps of the pattern in order, almost as though asking for instructions as to how to do it. This does two things:

Helping the client detach from the problem pattern is really important, and we can go further with this.

4. Remove the problem from the client’s core identity

As when treating any addiction, we can begin to defamiliarize compulsive shopping by placing it firmly outside of and separate from who the client is. It’s much easier to detach from a behaviour when it feels alien from who we really are.

If a person sees themselves as ‘an addict’, how can they ever leave addiction behind? It’s who they are. The addiction has nested within their core identity to the extent that it has become who they are. We need to help extricate the pattern from the person.

When treating addiction, we need to help extricate the pattern from the personClick To Tweet

We might ask our client how the behavioral pattern ‘cons’ them into handing over their health, their cash, or (as with smoking, for example) sometimes their very life. Our language then externalizes the pattern: “How does smoking lie to you?” “What tricks does gambling play on you to convince you to throw money at it?” “How do massive corporations get you to finance their profits for nothing real in return?”

The use of metaphor can make this even more powerful and is perhaps one primary use of storytelling through the ages.

With June I helped her detach from the pattern by suggesting that she had had “enough of being pushed around electronically”, that she could “bypass the muggers” (pop-ups) and “stand up to” and “see through” all the manipulative sales techniques.

I used the age-old metaphor of the siren call, suggesting that her bank account was being punctured and we needed to stop the leak.

I also suggested rather bluntly that she no longer had to support huge online corporations. They would survive without her ‘charitable donations’.

Ultimately I wanted to detach June enough so that she could feel a sense of control in the moment each time it (the out-of-control spending) threatened to push her into another needless purchase.

We can also use a bit of time travel.

5. Give them a sense of future past

I like to evoke that sense I think we’ve all had of looking back at something and wondering, “What an earth did I see in her/him?” or “Why did that seem so important to me at the time? It seems like nothing now!”

Something or someone that seemed like the world, impossibly attractive or compelling, can seem with the benefits of hindsight to have been hardly worth our attention. Most people have experienced something of this, or at least understand the pattern of it.

Towards the end of the filmed session with June I evoked that pattern, then had her hypnotically progress to a future point and look back (from that distant future) at the out-of-control spending that used to play her as though it were something she’d left behind a long time ago.

In this way we can help give the client a sense of having been free of the problem for a long time, to the point where it feels normal to be free of it.

Temptation is all around, but when it subverts the fulfillment of our real needs and lays our potential to waste, we need to find ways to master our impulses. And we need to help our clients do the same.

June’s therapy session was filmed for Uncommon Practitioners TV and will be available soon to view if you’re a member, and if you’d like to join, sign up here to be notified when UPTV is open for booking.

* Not her real name

“If a client says they are stressed should one first help them gain control, prior to helping them stop smoking?”