How To Stop Your Clients Catastrophizing About The Future 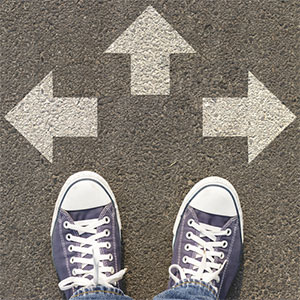 “What happens if he leaves me?”

“What will people think if I screw up my best man’s speech?”

Why don’t people know the answers to these questions?

Maggie sat crying in my office. After three months in hospital for treatment of a psychotic depression, she was now restored to health and about to return to her day job. And she was worried stiff about going back to a place where everyone now thought she was “nuts”.

“Going back to work will be a nightmare! What will everyone think of me?” she wept.

I stared at her levelly.

“Yes, you’ll feel embarrassed, I expect. Especially the first half hour… that will be hard and I guess it might even feel a bit like a nightmare. For the first week some of your co-workers, maybe most of them, will tiptoe around you, worrying that they might upset you, or frightened they might put too much pressure on you. They will be really aware of you and looking out to see you are okay.

In the second week they will still be watching you and aware, but not so much. Some will worry more than others, some will feel relaxed and confident around you again, confident that you really are better. Others will still be a little nervous where you are concerned.

By the end of the third week, everyone will feel around 80% back to normal as far as you are concerned. To all intents and purposes, many of them will have forgotten that you’ve been in hospital.

By the end of the fourth week, for the people you work with, it will be as if you’d never had that breakdown. Sure, they’ll think about it occasionally perhaps. But they’ll just be getting on with relating to you like they always did, as Maggie the woman they came to know and like, their colleague, because that’s who you are…”

“I didn’t actually expect you to answer my question in such detail! But I sort of feel better you did!”

So what therapeutic principle was at play here that helped Maggie so quickly?

Breaking down probable future reality in a way that makes it feel genuinely manageable is a mainstay of good mental health.

If we can encourage them to see beyond just “This will be the end of me!” they can be reassured it won’t be. Really thinking through a feared event can remove its sting and pave the way to increased emotional security.

Catastrophizing has people feeling but not thinking so much. They feel that life will somehow end when everything falls apart. But when we ask: “Okay, so what would happen, exactly?” we help our clients feel more secure.

Why? Because emotional security is not believing that nothing can go wrong, but that you’ll cope, whatever happens.

Emotional security is not believing that nothing can go wrong, but that you'll cope whatever happens. Click to Tweet

When someone says “What if I lose my job?” it’s tempting to just say, because generally speaking it’s true, “Well, you’ll manage somehow!”

But it’s extremely isolating for someone to hear that the thing they dread, if it were to come to pass, would be ‘nothing to worry about’. Sometimes things are hard. If someone says “What if I get divorced? What if she leaves me?” It’s no good just jumping to the “You’ll manage” part.

Saying “Yes, it will be horrible,” at least gets the thing they fear right out in the open. Acknowledged. Notice with Maggie I didn’t just say, “Oh, in a couple of weeks it will all be back to normal!” I first matched her emotional sense of how it might be: “Yes, you’ll feel embarrassed. That will be hard.”

Of course, that’s not all I did.

“Yes, you’ll feel embarrassed… especially for the first half hour.”

This breaks it down from the all encompassing “It’s going to be a nightmare!” to something that’s embarrassing for a while.

We can ask ourselves and our clients questions like:

“What will be the worst part of the experience?”

“How long do you think the worst part will last?”

“At what point will it start to feel a tiny bit better?”

When people say stuff like: “If he leaves me I’ll be devastated!” we can let them know we understand the emotional impact, but then start to break it down by using questions or just giving them a sense of moving through the experience and on into a possible life beyond it. Like this:

“What then? Well, I imagine you’d feel really heartbroken, even though you say you’ve been expecting it for a while. It would be awful for the first week in particular… during that time… it would feel like you could think of nothing else… during the second week you’d still be in shock and horribly upset but, although you perhaps wouldn’t notice it, you’d actually be thinking about it slightly less, maybe a couple of hours less in the whole week. At this point we’d expect you to be eating a bit more normally again.

After a few weeks you’d still get really upset when his name was mentioned or things reminded you of him. But you’d start reorienting more to your friends again and doing stuff to take your mind off it for a little while… but it would still seem to you as if you were thinking of him all the time… even though you wouldn’t be. At that point you’d be doing things to make yourself feel better… spending time with friends who make you feel good, making yourself work and exercise…

For a few months it would feel too raw, too early to date again… but there will be signs and signals that eventually let you know you are ready again. At some point in the future you would look back on the relationship with this man and remember the good bits and the bad bits with a level of calm that right now seems hard to believe. Because whatever happens… eventually… you will be okay and have a chance of thriving again.”

In effect, you are showing them the route through the anticipated horrible event which shows them there is a way through it. We realistically break down the ‘end’ or the ‘nightmare’ or the ‘unthinkable’ and project their way through it to the other side.

Knowing how you would cope if you lost something can help you enjoy having what you have right now.

We can take this further, however.

3) Imaginatively rehearse them getting through it and eventually thriving

Emotional insecurity of all kinds feeds on the feeling that “this will really finish me!” Responding by pretending that something definitely won’t happen (when it could) can be pretty harmful. All kinds of things could happen.

What makes you feel emotionally secure isn’t the belief that nothing bad could ever happen, but the feeling that whatever happens, bad as it may be, it will get better, and there are things I can do to get through it, survive, then thrive.

If someone is terrified of the possibility of some catastrophic event occurring, we can:

With Maggie, I relaxed her deeply and she rehearsed going back to work in her mind while feeling really calm. In the movie theatre of her mind she watched herself going back to work and going through that uncomfortable first half hour. She saw herself getting back into the swing of things again, saw how people were attentive to her at first, but also saw how quickly everything went back to normal, as if she’d never been hospitalized.

She called me up a month after she’d return to work.

“You were wrong!” she said, with a smile in her voice.

“Wrong about the first half hour back at work being horrible.”

“Yes. It was just the first ten minutes!”