How to Help Your Client Through a Divorce 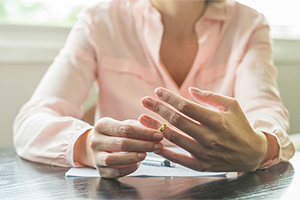 The heartbreak. The shame. The sense of failure. The death of a marriage can cause deep and lasting grief.

Some people rip their erstwhile spouse from themselves as though stoically tearing a band-aid off a half-healed scar. One ruthless yank and it’s off.

Others dwell, mull, worry, and lament, dragging their heels and refusing to let go. Is this the right thing to do? When and, for that matter, where did it all go wrong? What about the kids? What about the money? Can we even afford to get divorced? Who gets to live where?

The heartbreak. The shame. The sense of failure. For some, the death of a marriage can cause genuine grief.

Barbara was struggling. After years of unhappiness, she’d finally mustered the strength to do the difficult but necessary thing. But it was the opposite of easy. She’d been the one to instigate her divorce, and yet it was tearing her apart.

“I thought we’d grow old together, but we just grew apart,” she told me plaintively. “I feel like I’ve failed! I, we, should have made it work. We tried.”

I could see Barbara was being especially hard on herself when actually, reading between the lines, it sounded like she’d tried while he’d withdrawn. This – one partner emotionally withdrawing – seems to be a particularly toxic pattern and a big predictor of divorce.1

In fact, according to a national marriage survey conducted by the National Fatherhood Initiative in the US, “lack of commitment” is the most commonly cited reason for divorce.2 Feeling that your spouse just can’t be bothered is a huge intimacy breaker.

The person who once seemed like your soulmate becomes your cellmate, and divorce beckons.

In the US, 'lack of commitment' is the most commonly cited reason for divorce. Feeling that your spouse just can't be bothered is a huge intimacy breaker as the person who once seemed like your soulmate becomes your cellmate.Click To Tweet

“We didn’t argue much,” Barbara told me. “That’s the weird thing. But it’s like we just lost any connection.”

When things go wrong (which may be things going right in disguise), I like to look at what the client’s expectations were. Did their expectations clash painfully against the rocks of reality? And if so, do they blame themselves or others too unfairly?

Long gone are the days when marriage was essentially a financial arrangement or one designed to unite two families. If the couple happened to tolerate or, indeed, love one another, that was simply a pleasant bonus.

This isn’t to say that a rich prospective spouse isn’t without attractions, but culturally we now tend to see marriage as an institution melded in the molten heat of love.

And perhaps, sometimes, marriage gets thrown away too easily. It might be that a diet of rom-com romance and everlasting happily-ever-afters puts pressure on some couples, though other research has found little evidence of long-term relationship damage from rom-com viewing.3

The destigmatisation of divorce means that people no longer have to suffer at the hands of sadistic abusers. But Barbara’s marriage hadn’t been abusive, at least not in the usual way.

“I suppose I could have made it work…” she said.

“And yet you can’t revive a corpse”, I clumsily suggested. But it was a little too much a little too soon, and I could see it didn’t resonate. So I changed direction.

“What were you expecting from your marriage?” I asked.

Barbara hadn’t thought much about this. After a time she said, “We really did love one another, for many years. I thought I could make it work.”

So how did I help Barbara deal better with her divorce?

Tip one: Work out what exactly your client needs

I know, this sounds obvious! But all Barbara had told me via email was that she was getting divorced and needed help. And you’ll find that many clients are similarly vague about what they need from you.

So why exactly does your client need help? Have they stopped sleeping, eating, or seeing any kind of future? Do they feel frightened or have they lost faith in themselves as a suddenly single person?

Barbara was prone to perfectionism, to seeing life in all-or-nothing, success-or-failure ways. Even though she’d been the one to file for divorce, she was taking it hard and blaming herself for having “failed”.

Barbara hadn’t slept properly in three weeks. She was worried sick about their seven-year-old daughter and how the divorce might damage her. How she and her daughter would ever have a meaningful life after this. She’d stopped interacting with friends for fear they might ask about the divorce.

The practicalities and complications of divorce are one thing. But it’s what happens in the mind that makes for a hard versus not-so-hard divorce.

Tip two: Discover what your client worries about

Imagine never worrying about anything. You’d still have problems (in some ways, maybe more problems), but the problems themselves would have little emotional impact on you. If I got divorced or sick or faced bankruptcy but spent no time mulling about these events, their impact on my sense of wellbeing would be greatly mitigated.

Psychopaths seem to be very low in the trait of neuroticism, that is, the tendency to feel negative emotions easily. Now I’m certainly not saying that we should help our clients become more psychopathic when going through divorce! But a happy medium can be found. We can help them put those worries away for a while, at least some of the time, and relax more.

Your clients’ problems aren’t so much about what happens to them as what they do in their minds as a result of what happens – or what they imagine might happen.

“What do you worry about most?” I asked Barbara.

She answered quickly. “The effect this divorce will have on my daughter.”

Now that we had a point of focus, we could look at practical ways this effect might be mitigated.

We decided on the following strategies:

The point here isn’t to avoid all pain or hardship (as if that were possible!), but to take each worry and find at least a couple of ways to mitigate that worry.

This turns the worry into something external that can be influenced and controlled, at least to an extent.

We also addressed some of Barbara’s self-blaming, perfectionist “I should have made it work” thinking. I asked her Socratically whether a marriage was all the responsibility of one person. She laughed – which was as good a reply as any!

Remember, the more we can help minimize negative rumination, the easier the divorce is going to feel. We can help people feel differently quite directly, too.

Tip three: Help them relax by being relaxing

Some people, perhaps including you, just have something calming about them. If you have this attribute naturally or have learned it, you’ll find that people tend to want to talk to you. This is because the old adage is true: “There is no hospitality like understanding.” When the mind calms, it escapes the bitter swirls of emotional indigestion, for a while at least, and sees wider and more clearly.

I helped Barbara relax deeply and calmly envisage some of the practical steps she’d need to take. I asked her to observe her future self meeting her emotional needs and helping her daughter do the same.

Barbara had been deeply unhappy in her marriage. She and her husband had lost all intimacy. But she had worked on it for years. She had tried to get him to attend couples counselling and done everything she could think of to bridge the gap between them. Even after he’d met and dated someone else for a while, still she’d tried to make it work.

“The affair was short lived,” she told me. “Really, it was symptomatic of our emotional estrangement.”

Much of my work with Barbra was supportive. When things shift, sometimes we just need something firm to hang onto. Even just an objective, calm, encouraging voice.

Of course, just like marriage itself, the experience of divorce can be radically different for different people. Some ex-spouses continue to torment or try to control, and financial worries can feel overwhelming. But the three principles below will hold good for anyone going through divorce:

Over time Barbara stopped beating herself up so much. She began to minimize the amount of time she spent in guilty self-recrimination. She learned to look forward positively.

And she eventually recognized that she had done all she could and wasn’t entirely to blame for the end of her marriage.

She surprised me one day by echoing something I’d thought at the time she hadn’t even heard. “After all,” she said with a smile, “you can’t revive a corpse.”