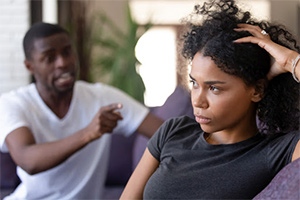 Good relationships are the biggest predictor of a happy life, yet excessive expressions of contempt destroy relationships like nothing else.

“Justice is sweet and musical; but injustice is harsh and discordant.”

“We live separately now,” she told me sadly.

“There were lots of problems, one of which is that I just couldn’t stop criticizing him. He’s a good man, but in the end I think my digging away at him, like a compulsion or scratching an itch, is what did our marriage in.”

So spoke Samantha. She didn’t know whether she and her husband Mike could ever reconcile, but she hoped they could.

“Even now, when he comes over I find myself criticizing him, being mean. I love him dearly but I can’t seem to stop… and it drives him crazy.” She stopped for a moment. “Well, I mean, it’s driven him away!”

The marriage had been good in many ways. Though Mike hadn’t been perfect, he had always been kind and decent. But, just as an abused animal comes to flinch and cower when offered even genuine affection, so too can a relentlessly criticized person come to see even benign and well-meaning words as attacks.

“I’ve been mean to him so often in the past it may take him some time to come round to realizing when I’m not being mean to him.” Samantha half-smiled at this thought. “After all, in the end it got to be that everything I said to him had an edge to it.”

“You worthless piece of…”

Contempt is a devaluation of someone. When that is expressed, the person knows they are being devalued. (Of course, whether they care or not is another thing.)

Contempt, whether expressed through body language, facial expressions of disgust, verbal belittlement, criticism, excessive sarcasm, or passive-aggressive behaviours, fundamentally communicates the idea that “you are worthless”, even if the person issuing the contempt doesn’t actually feel that way.

Some people, you may sometimes feel, are worthy of all the contempt they receive. Be that as it may, this piece is about helping clients overcome the tendency to unduly express contempt, especially in the form of criticism, towards people they would rather treat better.

When we talk about criticism, we’re not just talking about complaints – and it’s important to understand this distinction.

This is not who you are, just what you did!

A complaint, which may be justified, is time limited. It’s about the behaviour, not the fundamental nature of the person you are complaining to.

A criticism, on the other hand, is damning of the person’s core identity. It implies that the problem is pervasive and a permanent aspect of their core being.

So “I’m disappointed you forgot our anniversary this year” is a complaint because it’s time limited (“this year”), and specific – you are only talking about anniversaries, not saying you are fundamentally disappointed with the person.

A criticism is always, then, an exaggeration. “You never do anything right!” clearly cannot be true. “You didn’t do this right” may be.

When people learn to complain rather than criticize, relationships improve – as long as they can also let some complaints go and not feel the need to pick someone up on every little thing.

Of course, most of us criticize or complain sometimes, but it needs to be counterbalanced with sincere compliments, terms of endearment, and humour. If most or a lot of communication is done through criticism, or even complaint, the target can start to feel overwhelmingly negative about the relationship, that the relationship is fundamentally unworthwhile.

And criticism is particularly toxic when done publicly.

The perils of public putdowns

Samantha knew she’d often criticized Mike in front of their friends, but never really complimented him. She was honest enough with herself to see that she’d often publicly laughed at his ideas. This doesn’t just communicate contempt but also fundamental disloyalty and a willingness to see your loved one ridiculed.

There’s an array of causes that may underlie an overly critical communication style. It’s important to work with your client to see why they may be so critical that it’s spoiling their relationships.

It might just be a habit. Maybe the harsh critic grew up in an environment in which most communication was done in the form of nitpicking cussing, poking, goading and calling out. Maybe that is communication to them. Perhaps they’ve never really learned that communication can extend beyond the realm of the snarky.

Some people are naturally more disagreeable than others. Perhaps they have never learned to converse pleasantly. Natural arrogance may also play its part. But being low on agreeableness doesn’t mean your client can’t learn how to communicate more effectively.

A misplaced sense of service

Maybe the incessant critic feels they were put here on Earth to tell us mere mortals where we are all going wrong. They are, in their view, doing us a favour by telling us how defunct and defective we are.

Maybe your client doesn’t have great emotional regulation. We all say things we don’t mean, or gross exaggerations of what we do mean, when we’re angry. Perhaps they are angry in general. Angry people will tend to be more critical, as anger exists to motivate us to attack others – physically but also verbally. Constant harping may also be a sign of sheer frustration and unhappiness.

People may criticize as a way of lashing out if life as they are currently living it doesn’t meet their emotional needs in balance. Perhaps they are frazzled, fraught, and frustrated. Maybe they are disappointed in their life or the people in it.

Some people, too, may criticize or attack someone if they envy them. And of course, any of us if we feel cornered can end up lashing out in an effort to escape.

Attack as a form of defence

Maybe your client is defensive because they’ve been criticized so much in the past. For some clients, attack can seem like the best form of defence.

Finally, some people may criticize because they simply like to dominate others. By putting people down they maintain a sense of control and dominance, which may be important to them. They may even bully others with the force of their hectoring communication.

People like this may also be extremely attuned to what they see as power dynamics between people – a hierarchical ‘pecking order’, real or imagined, within which they are desperate to position themselves for power.

They may even be psychopathic and simply enjoy making others feel bad. Of course, if this is the case it’s highly unlikely they would be seeking your help to control their criticism of others.

But for those, such as Samantha, who do want help in controlling their tendency to be continually critical, there are some broad strategies we can take.

Step one: Work out what is causing the criticism

Carefully consider to what extent the causes in the list above, and/or any other causes you may find, are contributing to your client’s constant carping, and discuss this with them. Don’t judge or criticize them, simply be curious about why they may have gotten into this pattern of criticism as a primary mode of communication.

You may have to help them with anger management, help them better meet their emotional needs in balance so that frustrations don’t spill over into their relationships, or help them soften the bluntness of a naturally disagreeable personality by teaching them new ways to communicate.

It’s important also to teach your client what it actually means to criticize someone.

Teach your client the difference between attacking someone’s core identity by strongly implying general faults and addressing specific instances they are not happy with.

You could also talk about how criticisms carry within them depressive attributional messages. Depressed people tend to internalize specific failures as commentaries on their core being, globalize specific failures to everything in their life, and feel that negative situations are permanent while more positive ones are fragile and impermanent. A criticism shares these exactly same features.

Samantha was amazed when we discussed this distinction of criticism versus complaint. It was a lightbulb moment as she told me how John had indeed described her unrelenting criticism as “depressing”.

Help your client rehearse complaining rather than criticizing.

Psychologist John Gottman found that happy marriages depend on the magical 5/1 rule.3 That is, there should be five good interactions in the relationship for every not-so-good one (such as a harsh criticism).

A good interaction might be a mutually supportive conversation, praising one’s partner or coworker in a group situation, having fun together, and so on. So it’s not that all criticisms have to be ditched but they can be morphed into complaints, and even when they are complaints they should still only make up a small fraction of the overall communication and interaction within the relationship.

Ask your client what situations they are most likely to find themselves being harshly or even mildly critical in. What are the contexts in which it happens?

Use hypnosis to help clients inwardly rehearse, while relaxed, staying calm and relaxed and responding more adaptively and effectively when presented with the old triggers. In this way we train the unconscious mind, as well as the conscious mind, to feel naturally less inclined to criticize.

Through our work together Samantha did report feeling less critical of others generally. She also told me that she was speaking more lovingly and kindly to Mike. She saw him as a person, not some amorphous piece of clay that she could manipulate into the ‘right’ shape.

It may have been too late for Samantha to rekindle her marriage with Mike, I don’t know. Whatever happened, I hope they are both happy now.

I want to end by clarifying that none of this is to say that we can’t learn from being criticized. Certainly, we can often learn more through criticism than through praise. But if we want to get along with others, have great relationships, and thereby feel life is worth living, we all need to know how to curb inner sanctimony and outer attack mode.

We can often learn more through criticism than through praise. But if we want to get along with others, have great relationships, and feel life is worth living, we all need to know how to curb inner sanctimony and outer attack mode. Click to Tweet