How to Help Your Client Deal with Unkind Critics 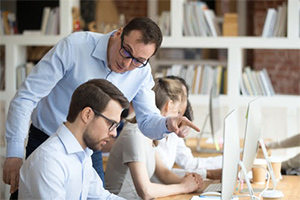 Clients who are more likely to take negative criticism to heart also tend to be more excessively self-critical. Sometimes they may need to learn to see criticism from others for what it is.

The smile was wiped from his face like cream cheese from a hot plate.

I was helping at a live seminar entitled How to Deal with Difficult People. Hundreds had been sent from their respective workplaces to learn how to deal with various difficult behaviours.

This seminar was unusual. We used actors to display both the difficult behaviours and how to deal with them, which the seminar leader did with a practised flourish.

I’d noticed the real difficult person straight off the bat. I knew he’d be trouble!

This one guy in the audience was clearly basking, amidst his little entourage of co-workers, in the light of his own cynical wit.

As the speaker introduced the day, this critic whispered his salty sound bites, shot the speaker gleefully malicious glances, and generally looked to be warming up for, if not a verbal assassination attempt, at least some critical pot shots.

The speaker commenced by outlining what the group would be learning. Emboldened by a few supportive sniggers, the sniper, no longer satisfied with ‘entertaining’ his own entourage, began to raise his voice. His innate aggression was shifting from passive to active.

He began taking shots at the speaker, raising his voice enough to irritate most of the audience. The heckler at the club, the clever-clogs critic, the general irritant, he smirked at the ideas of the speaker and was clearly keen to be seen as above all this nonsense. He was being difficult at a difficult people seminar! I felt I knew what was about to go down.

Who stole my role!

One of the actors had sat anonymously within the audience. He was maybe five or six seats away from our genuinely negative show-off. But the actor was going to do it so much bigger and better than the real deal!

“Yeah, yeah…” he interrupted, his voice startlingly loud, “this is all very clever, but why should we listen to you!?” The actor sniggered as he glanced smugly around him. He then continued to quip, quibble, and quarrel so garrulously that it soon became clear this was a plant.

No beauty likes to be outshone, no ‘good’ person out-virtued, and no ‘wit’ – even half of one – outwitted.

The real sniper was dealt with (as was the role-played sniper). The raison d’être of his behaviour had been well and truly extinguished by the light of a bigger and better display of obstructive acting out.

The original (and genuine) sniper’s wind left his sails, and he shut up and behaved. Someone had shown his behaviour back to him, but on steroids! What now was his role?

Showing people’s behaviour back to them gives them a chance to see it objectively and thus correct it. This technique has, apparently, been a Sufi teaching method,1 and has also on occasion been used by Dr Milton Erickson.2

On this occasion, though, it was pure happenstance that this man saw what he was like but in exaggerated form. And to say the wind left his sails is to understate the matter!

Sometimes we have clients who are clearly dealing with difficult people in their lives, from narcissists to control freaks and guilt trippers.

Being on the receiving end of someone’s negative carping is demoralizing and downright depressing. Here I want to address how we can help clients become more resilient in the face of negative criticism.

Step one: Reassure your client the behaviour really is difficult

We do our clients a disservice if we encourage too much empathy and ‘understanding’ when it comes to difficult people in their lives. They may already be in the habit of excusing people all the time. You might gently remind them that we don’t turn a tiger into a vegetarian by offering it veggie burgers!

We do our clients a disservice if we encourage too much empathy and 'understanding' when it comes to difficult people in their lives. After all, you don't turn a tiger into a vegetarian by offering it veggie burgers!Click To Tweet

Your client can be annoyed, and sometimes annoyance is valid. If you feel that someone in your client’s life is behaving terribly and being unfairly critical, then say so.

If I feel a client is excusing someone else’s bad behaviour or feeling it’s somehow justified, I might say something like:

“How the hell do you put up with that!?”

Non-judgementalism can strip empowerment from people faster than you can yell, “Enough!” It’s okay to see behaviour as pathetic, selfish, and thoughtless.

And we can remind our clients we are talking about the behaviour that is difficult, not necessarily the essential person.

Clients who are more likely to take negative criticism to heart also tend to be more excessively self-critical. Sometimes they may need to learn to see criticism from others for what it is.

So before we help them deal with the excessive blame thrower, we may need to help them stop taking all of the blame pie for themselves and remember other people can be at fault.

There’s a great way we can do this.

Step two: Teach them the difference between a genuine complaint and a vicious criticism

When my client Mike told me how his wife would speak to him, he spoke with no judgement whatsoever. In fact, he only told me because I had asked.

“How often does she say these things to you?”

“Oh, most days… although usually I’ve done something to warrant it.”

When what might have been a justified complaint becomes a character attack, it degenerates into a mere insult even if the original complaint was justified.

Mike suffered immensely because he felt that his wife’s constant sniping was in some way justified. He was relieved when I described what a criticism – as opposed to a complaint – actually is. He could then see how it had to be unfair.

He had been bending over so far backwards to see things from her point of view that he could no longer see them from his.

So, criticism tends to:

You’ll no doubt recognize these cognitive distortions as inherent in the depressed client‘s mindset, too.

And yes, being overly criticized is, for many people, depressing.

A criticism, then, is closer to an insult than a complaint. When thinking about relationships we need to look at what proportion of communication is simply insulting. Within any healthy relationship any negative feedback will be balanced by more encouraging feedback.3

Once our clients see through the gross exaggerations and generalizations of critical communication, they don’t need to ‘swallow’ it so often and can gain distance and objectivity – which can, in turn, help them transcend unfair criticism.

I taught Mike to understand the inevitably false nature of criticism and also how to not respond so emotionally. More of that in a moment.

“You don’t take insults; you leave them with the insulter.”

Clients with low self-esteem tend to digest criticisms and spit out compliments.

A client of mine, Dave, was being sniped at by a colleague at work who would constantly make snide comments. Dave always took them to heart and had, in his words, become paranoid and scared to make any mistakes – even though others told him he was good at his job.

This co-worker would imply criticism, which is a neat way of sniping because you can then simply deny you were targeting any individual. When Dave took time off to attend his father’s funeral, she’d said, “Yeah, well, we can’t all have time off during a project!” And she would often say things like “Some people have no dress sense at all!”while smirking in Dave’s direction.

Dave had a history of being bullied by his mother and father, at school, and also in previous workplaces. Perhaps that was part of the reason why, when Dave had tried confronting this workplace sniper, he had felt so nervous that it had “not gone well!” She had told him he was “just being paranoid” and had “no sense of humour” – but he told me others had spotted her behaviour too and agreed she did target him.

Dave was conscientious and hard working, and often helped this co-worker with her projects. But when he thought about it, he realized she never gave him positive feedback of any kind. He said that he felt she could definitely pick up on his nervousness and seemed to enjoy it when her snide comments seemed to affect him.

I suggested that it would be great if when she tried to push his buttons she found they… no longer pushed. “After all,” I said, “when a slot machine completely stops paying out, no one’s going to play it anymore.”

So Dave and I started to work on taking the emotion out of the criticisms.

He left the session refreshed and calm. The next time he came in he surprised me.

“I confronted her! The woman I was telling you about!”

“Yes! She made some snide comment about ‘some people always being favoured over others’ and before I could help myself I turned to her, in front of everyone, and asked her who she was talking about. But here’s the thing, I was so calm! It felt like I was watching myself do it.”

“And how did she respond?”

“The usual. She told me I was being paranoid and that she was joking. I asked her where the joke was. I then asked her to stop making snide remarks and if she had something to say then say it properly. I didn’t shout, but I was loud enough for everyone to hear. She hasn’t made one snide comment since, Mark!”

I suggested to Dave that, like weeds that need cutting back sometimes, her behaviour may need managing in future but that I had every faith he’d manage it.

Because of his history of being put down by others, this was a major breakthrough for him: “It was like I was standing up to everyone who’d ever put me down!”

Let’s be critical of criticism

It’s never a great idea to criticize people, even behind their backs. A phenomenon known as ‘spontaneous trait transference’ means that even when people know you’re negatively describing someone else, they may transfer those traits subconsciously onto you.4 The speaker is perceived as possessing the very traits they describe in others.

So if I constantly talk about someone as being ‘stupid’ or ‘lazy’ thse traits may inadvertently and paradoxically come to be associated with me! Sometimes justice is a natural phenomenon, as the mud we intended to throw at others ends up sticking to us.

We don’t grow simply by making others seem smaller.

You can watch Mark Tyrrell working live with real clients in Uncommon Practitioners’ TV. And in addition to more than 100 filmed sessions, you will also have access to training videos and Mark’s flagship course ‘Uncommon Psychotherapy’. Read more here.