How to Help the Client Who Doesn’t Want Therapy

Reframing therapy so that reluctant clients can accept help 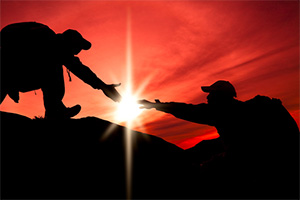 “When we are no longer able to change a situation, we are challenged to change ourselves.”

“They have to want to change!”

I bet you’ve heard this. It’s one of those therapeutic clichés. An unmotivated or reluctant client is no client at all. But they could be.

Like many clichés, there’s some truth in it. We do need our clients to be focused on their own cure. Or sometimes we need to find ways for them to be cured despite self-sabotage. We can throw a lifeline to someone, but they do need to grab it.

When we look at how people act rather than merely what they say, we can tell whether they are really motivated or not.

But first, a caveat.

The world on the couch?

At this stage I think it’s worth saying that, just as the physically fit and healthy don’t need medical first aid, I don’t think everyone needs or should have therapy.

Some therapy schools insist that all their practitioners have copious analytical therapy, for which they may have to pay extra on top of their training. The idea is that if it’s good for some people it must be good for all people. One woman I knew had to have therapy three times a week for three years just to qualify as a therapist!

But rushing for psychotherapy at the first sign of any emotional difficulty may deny a person the chance to develop their own coping strategies, creative problem solving,  and personal strength. The pebble is only made smooth by the lashings of the sea.

Sometimes though, people can benefit from sensible, balanced, strategic help. The effects of a person’s past or current circumstances may become so overwhelming that they really could be helped by an able practitioner if they would but entertain the idea.

Lambert was brought to see me because he was suffering. His wife had “forced” him to come. As he sat before me, slumped in exhaustion, he said:

“I’m not normally a weak person!”

But his daughter had died and he’d never gotten over the trauma. Work stresses were piling up. And… and… and…

Lambert was a structural engineer. I told him I knew little about engineering but asked him whether, if a bridge was taking on much heavier loads, would there ever be a case for reinforcing it?

“Would that be the bridge’s fault? That it needed reinforcing?”

“No. It would be because its load had increased.”

I didn’t mention weakness again, and nor did Lambert. He didn’t need to. He now had a frame of reference that made therapy acceptable.

Along with not wanting to seem weak, there is another idea some people form about the need for therapy.

Some people feel they don’t need therapy because they don’t want to think of themselves as ‘crazy’ or ‘weird’.

Cassy was “forced” to see me by her mother. Once her mum had left the room, the 19-year-old told me she didn’t want to be here at all. I didn’t take it personally.

I didn’t try to argue with her perception or try to convince her logically why therapy for her panic attacks might be a good thing. Her mother had used every argument in the parental book, so she was well primed to resist such ideas.

Instead, I told her that I didn’t blame her for not wanting therapy – because she didn’t know yet how it could make her happier.

I didn’t use ‘well’ or ‘normal’, but ‘happier’. I told her that any ‘normal’ person her age, or any age, wouldn’t want therapy. But I also suggested that most people, in my experience, don’t want panic attacks. She told me how bad the panic attacks were. I asked her:

“What do you not want the most? Panic attacks, or therapy to cure the panic attacks?”

Cassy smiled: “Panic attacks, I guess.” Then she added pensively: “I guess I think of myself as normal, and it feels like I must be weird to have to have therapy.”

“Yes,” I said, “‘therapy’ isn’t a great word. Really, this is a learning situation. I can teach you, your unconscious mind, how to stay relaxed and not bother to intermittently waste all that energy when panic isn’t needed. Some people like the idea of therapy, but for our purposes this is really a coaching session. And perhaps we can take just one session. Sound good?”

Sometimes we can reframe what is normal and what therapy is, but in order to do that we need to join with, not argue against, the client’s perception.

When working with reluctant clients we need to join with, not argue against, their perceptionsClick To Tweet

But sometimes your client may not quite be ready for therapy.

What if it gets even worse?

Build your shelter while the sun shines; that’s what they say. But I suspect on a metaphoric level, most of us don’t do that. As long as things aren’t too bad, we let it ride and ignore the gathering storm clouds. But once it starts pouring, we suddenly feel extremely motivated to find cover.

It takes a far-seeing mind to solve problems before they arise.

Human beings often change only when they are forced to change. Not forced by other people (often that just makes them resentful and resistant), but by circumstances and discomfort.

Has your client reached a tipping point? And if not, can you help them do so?

The heavy lady who got heavier

I recall a case history of Dr Milton Erickson in which he instructed an overweight woman who was reluctant to engage in therapy to put more weight on. Eventually she was begging him to be allowed to start losing weight. He had effectively engineered the problem to become so bad that she felt now she really wanted to change. What a crazy example, you might think.

It’s hard to get away with that kind of therapy nowadays. Efficacy and what is seen as ‘correct’ often don’t sit easily together. But we can pose questions to this effect, such as:

“If you were to continue eating/smoking/self-harming like this into the future, describe to me exactly what you imagine it will be like for you.”

I might even hypnotically have a client experience the ‘rain’ before it starts pouring. This may be enough, as I stretch this metaphor to breaking point, to get them motivated to build that shelter now!

Have you ever read or watched Charles Dickens’s A Christmas Carol? Ebenezer Scrooge is forced (by the ghost of Christmas Future) to confront his own potential fate if he carried on as he was doing . He doesn’t have to wait for the future, by which time it may be too late, because he’s been given access to it in the present.

Making changes when we reach rock bottom is all very well, but people can be more sophisticated than that.

Ultimately we don’t, shouldn’t, and can’t force people to engage in therapy. They are free agents.

But we can help frame therapy as acceptable within their frame of interest and understanding, help make it feel normal, and focus on the possible eventualities if they continue as they are without help or change.

We all need help sometimes, and there need never be any shame in that.

And you can develop your reframing skills and free your clients from their preconceptions with our Conversational Reframing course. Click here to be notified when the course is open for booking.