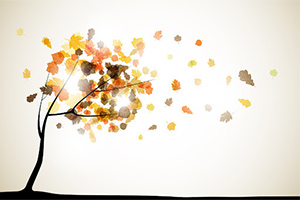 As long as we predicate our self-worth on the opinions or behaviours of others, we are like leaves swept around in a perpetual gust, with little grounding or true sense of self.

Olivia sniffed and dabbed her eyes. “What did she mean by that?”

“I couldn’t possibly know,” I said.

A co-worker had raised his eyebrows and looked “pained” when Olivia had suggested she might lead a work project. This apparent micro-gesture had then led to a torrid maelstrom of self-doubt within my new client.

“Well, maybe he was having a hard day,” I offered. The truth was that what the co-worker might have meant (which neither Olivia nor I could possibly know for sure) was the smaller issue. The bigger issue was how could she learn to not take things so personally. Taking stuff to heart and gnawing at it to the point of panic seemed to be a general pattern for Olivia.

To take things personally when we’d be better off not to is to make things much harder for ourselves. Where we focus and on whom makes a huge difference to our personal happiness.

And there’s a simple formula for this.

People with low self-esteem and/or some types of depression tend to internalize the negative but externalize the positive. In other words, they’re quick to apply blame to themselves (“I screw up everything!”) even if the objective facts don’t bear that out, yet equally quick to distance themselves from anything good that happens (“I was just lucky my novel became a bestseller!”).

With this worldview, possible external causes for a negative event are minimized or remain entirely unperceived:

It follows that someone who is prone to internalization of negative events tends to take things personally.

But taking things too personally isn’t just the province of those with too much self-doubt. Sometimes too much self-esteem can also lead people to make everything about them.

Narcissistic people tend to make everything about them and so may not take kindly to anything that isn’t about them. They want everything to be personal in the sense that it’s about them.

Some folk take credit for other people’s work, a kind of egocentric internalization. And they might externalize any possible blame so that nothing is ever their fault but always other people’s. This is another way of taking things too personally.

Some people may resent others or sink into envy. Envy is, in a sense, taking something good that happens to someone else personally (as though it’s about us). So people can feel slighted by the success of others, as though it somehow insults them.

Those prone to angry outbursts also tend to see slights where none were intended or presume attacks where none exist. For example, those prone to road rage take things personally in a “Do you take me for a mug?!” kind of a way.

Angry people may also bear long-term grudges and not make allowances for others’ mistakes, seeing them instead as deliberate acts intended to hurt them.

Taking it to heart in two different ways

Taking things too personally can cause people to inwardly agree with the (supposed) slight (“My boss must mean I’m a lousy worker!”). This over-vigilance for criticism may result from having been overly and unfairly criticized in the past.

Then again, such over-vigilance may be based in a hubristic reactivity to any perceived slights from others, to even the merest hint that they might not be perfect (“What did my boss mean by that?!They’d better not be suggesting I’m not the best worker here!”). This kind of oversensitivity may result from never having been told no or having been overprotected from negative feedback in the past.

So how personally should we take things?

The middle ground when responding to ambiguous feedback we get from others is to:

All this requires a calmer approach to others and ourselves. We need to not jump to conclusions and assume what others meant or didn’t mean without more information.

Seeing ourselves ‘in the round’ – the favourable parts as well as the less flattering parts – calmly and fairly, without falling into hopelessness or vain hubris, is an important step in anyone’s development.

So how can we help clients modify sensitivity and feel less threatened by perceived criticisms or slights?

Step one: Ascertain how and why your client is oversensitive

Olivia was prone to depression and had been told by others that she was prone to “take things the wrong way” and that she needed to “let things go”.

Another client of mine, George, was prone to anger and tended to externalize blame. In contrast to Olivia, who assumed others must be right to view her negatively, George felt that others needed to be “taught a lesson” if they so much as questioned him.

So what form does your client’s oversensitivity take? Do they agree with other people’s negative reactions to them, or feel affronted because they don’t agree?

Next, we need to provide hope.

As long as we predicate our self-worth on the opinions or behaviours of others, we are like leaves swept around in a perpetual gust, with little grounding or true sense of self.

As long as we predicate our self-worth on the opinions or behaviours of others, we are like leaves swept around in a perpetual gust, with little grounding or true sense of self. Click to Tweet

Just as believing we can change our mood from bad to good actually helps us do it,2 so too helping our clients believe they can take things less personally and feel more resilient can also help them realize this reality.

By suggesting to our client that the problem might be not in what so-and-so meant by such-and-such comment but rather in their oversensitivity and tendency to assume negatives where none were intended, we can begin to help them see their pattern from the outside, so to speak.

Second, we can suggest that they can begin to take things less personally while still maintaining a capacity to look at themselves fairly and take any constructive feedback as useful without being hurt by it.

So tell your client in no uncertain terms that it is possible for them to take things less personally.

But we need to do more than that.

Explain to your client the difference between externalizing causation and internalizing it. Ask them about their assumptions and conclusions so they can examine them more objectively. Not all experience is essentially about us. You could ask them to generate alternative possible causes for someone’s behaviour which don’t necessarily have to do with them.

I asked Olivia to generate possible alternative reasons why her colleague may have looked doubtful when she had suggested she might be able to lead a work project. Olivia came up with:

Maybe, she realized, she needed to find out more before jumping to conclusions.

Similarly, examine with your client the conclusions they draw from perceived or actual criticisms. For example, Olivia feared that her co-worker’s response indicated that he thought Olivia was “dumb and incompetent”. So I had her generate counter-examples to that idea.

So ask your client why the reactions of others upset them so much: What do they assume about it, then what conclusions do they leap to?

Once you’ve worked out what exactly your client fears about the perceived slight or insult, have them generate other possible interpretations or explanations.

Once we can see the patterns of our own responses, we are in a position to stand aside from them and begin to change.

Olivia loved her dog. I asked her whether her beloved labrador ever plunged into a pond or lake and she smiled. Later, in trance, I got her to picture her dog emerging from a dip and shaking all the water from himself, the droplets catching the light as they danced in the air. I then suggested she could do that whenever she felt sensitive: shake it off. I got her to hypnotically experience what this ‘shaking it off’ would feel like.

I also evoked the metaphor of ‘water off a duck’s back’: People’s comments or our imaginings of what they think of us can be like droplets that we shake off or move through without them sticking to us.

While Olivia relaxed deep in hypnosis, I encouraged her to experience going through days, weeks, and even months and years like this: taking feedback but not being hurt by it. The deep relaxation she received from this hypnotic part of the therapy helped her begin to be more relaxed generally, too.

But we should be careful to realize that it’s not true that our clients, or anyone, should never consider how negative feedback might actually reflect something they could improve about themselves.

It’s not about me… or maybe it is about me

If a pattern presents in the kind of negative feedback your client is receiving, then maybe it is about them. If ten people have given them similar feedback, there just might be some truth to it.

If this is the case, they may need our help to take on that feedback without feeling hurt or demoralized. Maybe they are defensive because as a child nothing they did was ever good enough, or maybe they’ve been in relationships with highly critical people. So sometimes we need to tread carefully if we suspect there is some truth to the feedback they’ve been receiving.

Your client may need to learn to be more assertive and to replace imagination with discovery by learning to ask people what they meant by something. One danger here is that they do it too often and start coming across as excessively needy or insecure. But on occasion, it may be necessary to be more assertive and open rather than just agonizing and imagining.

Olivia eventually asked her co-worker how he felt about her wanting to head up the new work project. He looked surprised and said he was absolutely fine with it!

Ultimately, not taking things personally is about keeping the bigger picture in mind and not feeling damned by specific experiences.

In our last session, Olivia said she was happier and calmer, felt more resilient, and could more easily ‘shake off’ the comments, looks, and even insensitive actions of other people.

“I can,” she said proudly, “decide not to take offence even when someone tries to give it to me.”

Mark’s course Conversational Reframing will give you the tools to skilfully reframe entrenched beliefs to free your clients from their ‘prison of ideas’. Learn more about the online course here.