How to Help a Client Stop Cutting 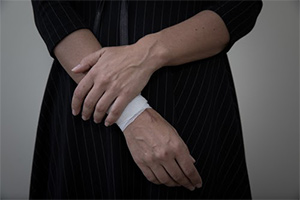 Self-harm can begin to work like an addiction in which expectation, ritual, and the activation of 'reward pathways' in the brain all play a part. It can feel habitual and familiar, almost like a friend.

On our first meeting she told me despairingly, “I don’t want to die. It’s just that I can’t handle these feelings!”

Candice was 19 years old, and her scarred arms were a source of much shame. She’d had multiple skin grafts and had been told that to cut away at herself now would undo the surgery that had only partially obscured the evidence of years of self-harm.

Sure enough, the evidence suggests there is a considerable increased risk of death, particularly by suicide, among those who self-harm.3 But this doesn’t mean self-harming is necessarily an indicator of actual suicidal intention.

Candice told me she had, very rarely, thought about the possibility of killing herself. But that’s not why she self-harmed. Quite the opposite. “If anything,” she mused, “the relief I get from cutting has prevented me killing myself.”

Many self-harmers want to hurt but not kill themselves.

You may never have seen a self-harming client, or perhaps self-harm is something you’ve seen clients do only occasionally. But one thing’s for sure. Self-harming behaviours are common – and getting more so.

How widespread is self-harm and what methods are used?

But in this piece I want to look at a specific kind of self-harm: cutting.

Self-harm through cutting is, alas, very common now, particularly among girls. In the UK between 2011 and 2014, the incidence of self-harm among girls aged 13-16 increased by a whopping 68%.4 Bearing in mind that self-harm is often secretive, the true incidence may be much higher. It may also be that girls are more willing to report self-harming than boys. We know that many times more males than females commit suicide.5

Self-harming is more prevalent in the young and also in those with low self-esteem.6 But of course, cutting can further damage self-esteem – and so the vicious cycle begins.

Self-harmers may cut or scratch their skin with anything sharp – razor blades, pen caps, even paper clips. I’ve known self-harmers to punch themselves or burn their skin. Sometimes they will pick at their wounds continually as an adjunct method of self-harm. These sorts of behaviours often start around puberty.7

Self-harm is depressingly common among young people, with one survey in the UK showing that just over a third of young people had self-harmed at some point.8

But why do people begin and maintain such a habit?

Why people harm themselves

Candice had been sexually abused during her early teen years. She had few friends, was lonely, and felt a general sense of guilt.

“I suffer terrible panic sometimes,” she confided to me. “It’s like my head is going to explode. I cut to release the tension, I think.”

What’s more, self-harm can begin to work like an addiction in which expectation, ritual, and the activation of ‘reward pathways’ in the brain, mediated by dopamine and endorphin release, all play a part. It can feel habitual and familiar, almost like a ‘friend’, to the person who engages in it.

When I worked in a psychiatric institution we would sometimes find patients calmly watching TV while they sliced their arms as absentmindedly as if they were eating a snack! It really can become that habitual.

So what steps do we need to take to help someone who has become stuck in the self-harming cycle of cutting?

Step one: Ask when it started and how is it done

Candice had started cutting the back of her wrists, all the way up to the elbow, when she was 15 – four years before coming to see me.

“I’d left home by that time, so the abuse had stopped, but I was spending a lot more time on my own and some of the memories and thoughts I had were too much to deal with. A friend of mine – my only friend – cut, and soon I started too. But my cutting was much worse than hers!”

By learning about the circumstances under which the self-harm began, we might begin to understand the next point. What need does the client unconsciously seek to complete through the self-harm?

Candice said that she would cut when she felt lonely, and also when her anxiety started to feel unbearable. I asked about exception times, times when she just didn’t feel this need. She told me, “When I’ve had a good time with friends or when I’m just feeling chilled.”

This told me that two primal emotional needs lacking in her life might be social contact and a sense of safety and security.

If we could begin to help her feel calmer and safer generally, and also encourage and help her to make steps towards more and richer social connections, then the raison d’être for the cutting might start to drop away. But it’s been found that hanging around with other self-harmers may worsen self-esteem,11 so we looked at ways Candice might be able to widen her circle and spend time with people who didn’t necessarily self-harm.

By asking about specific triggers we can help our self-harming clients spot what needs the cutting was trying to meet for them, and support them in finding healthier ways to meet those needs.

I worked with Candice to devise strategies to help her deal with times she might be tempted to cut.

But we had to do something else first.

Step three: Deal with any trauma

For some, self-harm may be a way of dealing with PTSD. Candice had been sexually abused by a family member. She still experienced not just intrusive thoughts, but full-blown flashbacks to the assaults, as well as horrendous nightmares.

Candice told me, “When I cut it seems to distance me from all that.”

Asking someone not to cut when it’s the only way they know how to manage the horrors from their past seems cruel.

But by working to directly lift the trauma so that the flashbacks and nightmares stop, we can deal with the root cause, or at least one of the causes, of the cutting. We are working at the very source of the problem.

Asking someone not to cut when it's the only way they know how to manage the horrors from their past seems cruel. Instead, we can work to directly lift the trauma so that the flashbacks and nightmares stop.Click To Tweet

I used the Rewind Technique with Candice in her first session to lessen the power of those worst memories of abuse. After that she found she no longer had flashbacks and started sleeping a bit better too.

For some clients, dealing with abuse comfortably and effectively can go a long way to dealing with self-harm. So always check whether trauma may be playing a part in maintaining the cutting and, if you find it is, help your client process the trauma effectively.

Unfortunately, even when the causes have been effectively ameliorated, for some clients cutting has already become a self-sustaining habit.

Someone may start any behaviour – smoking, drinking, gambling – for a particular reason (perhaps peer pressure or to relieve anxiety) yet still continue the behaviour long after that reason has disappeared. What we do a lot of soon becomes something we do unthinkingly, even when the original circumstances that generated that behaviour have dropped away. Sometimes we find that cutting has become a habit, even an addiction.

Help the client replace cutting with healthy behaviours. Use pattern interruption techniques and tasks. Do the ‘tipping point’ exercise with them so that they can hypnotically rehearse starting to feel as though they might cut then escaping the pattern and losing interest in it.

As Candice began to lessen, then pretty soon stop, self-harming, her self-esteem improved. She no longer felt traumatized. She started a part-time job, and started making plans to go to college. Her social circle widened and she began to spend time with people who genuinely cared about her.

I couldn’t have been happier for her when, towards the end of our work together, she told me brightly, “For the first time in my life I feel accepted.”