How to Empower Your Clients 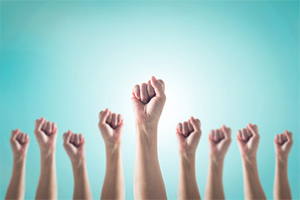 People gain a subjective sense of power when they behave authentically.

“You are not meant for crawling, so don’t. You have wings. Learn to use them and fly.”

“I just feel so powerless…”

He told a tale of having been bullied at home and at work, of being passed over for promotion because he was a “wallflower”, of seldom speaking his mind in his personal relationships, of being “left behind” and “trodden on” all his life. But one thing struck me.

Listening to him describe his history and current life, it seemed that he’d always tried to live up to other people’s expectations.

The perilous path of people-pleasing

I suspected Peter was living like this, people-pleasing, for appeasement in an unsafe world. His lack of authenticity had been forged in the fires of fear and doubt, as his parents had been chaotic, volatile, and unpredictable. One wrong word or action could result in a beating one day or the silent treatment the next.

Now Peter oozed a sense of learned helplessness and passivity. He had gotten into the habit long ago of rolling over, appearing harmless, and letting other people determine his life. And now he found it hard to even know what he wanted, though he suggested some respect from others would be nice.

At the root of Peter’s fear was an assumption: “If I do what they want, then I won’t get hurt!”

The drive for security and safety is a strong one and can lead us down some dark paths when we don’t meet the need in balance.

The opposite to feeling insecure, unsafe, and helpless is to feel empowered.

But what does this really mean?

Status is important. Low status is unhealthy, and those who are or feel low down in the pecking order can have reduced longevity and physical wellbeing.1,2,3 I suspect higher status correlates with a greater sense of control over one’s life, of feeling more empowered day to day. But if you ask me, a sense of empowerment depends on more than just official status.

Peter was a middle manager in an NHS Health Trust. He wasn’t low in status, but he felt disempowered in his life. Not speaking our mind, not being assertive or ‘real’ with people, has consequences when it comes to our sense of empowerment. And research backs this up.

The power of being who you are

According to the results and conclusions of a series of five experiments, people gain a subjective sense of power when they behave authentically.4 Gan and colleagues concluded that power is associated not with acting based on situational demands, but with authenticity.

Authenticity means being true to our feelings, thoughts, and attitudes. It means acting freely in ways that are true to our core values and principles rather than acting or reacting based purely on the situation or what others expect.

I won’t go into detail on the methods and results, but I do think it’s interesting to note that the last experiment found that when people are authentic, the effects are felt not just by themselves but by others as well. That is, when we feel empowered because we’re being true to ourselves, we seem more powerful to others.

This research is supported by another study which found that the more authentic employees feel, the more satisfied they are at work, as measured by self-reported job satisfaction, performance, and engagement.5 Again, authenticity is seen to be empowering. Moreover, other research has found that being true to oneself more often is correlated with greater self-esteem and life satisfaction and lower stress.6

Research shows that being true to oneself more often is correlated with greater self-esteem and life satisfaction and lower stress. Click to Tweet

But what are the costs of feeling inauthentic?

In yet another study, entitled The Moral Virtue of Authenticity: How Inauthenticity Produces Feelings of Immorality and Impurity, it was found that feeling fake – having to paste on a smile when that’s the last thing you want to do – is not only bad for moral and self-esteem, it also makes people feel immoral and impure.7

It’s highly stressful to always have to pretend to be someone you’re not, and perhaps the stresses of a ‘meet and greet’ service industry job are sometimes not fully appreciated.

But Peter felt inauthentic in most of his interactions. He didn’t like to voice an opinion, even to his closest friends, if somehow it wasn’t the ‘right’ opinion. He couldn’t trust his own judgement. His wife made all the decisions, as he didn’t want to upset her.

So how might we help clients to feel more authentic and therefore more empowered and happier?

Tip one: Suggest, then show them how

The platitude “be yourself” can be empty as a politician’s promise. But essentially that is what needs to happen. The problem with these kinds of statements is that they give no indication of how to be yourself. “Just be a professor of quantum physics!” might seem like encouraging advice, but it isn’t much help!

I talked to Peter about his life. I suggested it was his and no one else’s. I suggested it was a terrible strain to always have to second-guess how others might take what you say or do. I further suggested how liberating it might be to live by his own rules a bit more and care less what others think. He agreed.

I asked him if he was sure he agreed, and assured him that I was perfectly happy to be disagreed with and he could be real with me. I wanted to know what he truly felt. He thought about it and realized he did genuinely agree.

I asked him how his life would look once he was more open and self-determined in his words and actions. I encouraged him to imagine saying what he felt and thought more often, and letting people respond to it in whatever way without worrying so much.

Finally, I suggested that when we play a sport such as tennis we are responsible for our shot, but how the other person responds and returns the ball is up to them. He liked that analogy and I used it later during the hypnotic part of his therapy.

I also reminded him of one central truth.

Tip two: You are your own green light

I’d noticed Peter talked in terms of things he wanted to do, but never did. He was too worried his wife wouldn’t like him taking up golf, or a co-worker might not like his ideas on how to improve working practice, and so on. He was a permission seeker, and yet often he didn’t even ask others for fear they’d think ill of him! So the golf remained unplayed, the ideas untested, the jokes unsaid. Waiting for permission from others tends to lead to lots of waiting and little permission.

I asked Peter Socratically whether there were some things in life we needed to seek permission for, such as building work or a visa, and some parts of life in which we could just act and give ourselves permission. I asked him to think about these two categories and write down examples that fitted each category, like so:

Peter eventually produced many examples for each column, including whether to stay in a relationship or not (no permission required). Of course, sometimes it’s a bit blurry and just because we don’t need permission for something doesn’t mean we should invariably do it – making an off-colour joke at a funeral doesn’t need permission but may not be prudent, he suggested with a smile.

I set Peter a task for the week ahead: to take three small actions that he would previously have felt he’d needed permission from others to do. Actions which required no official permission, I hasten to add!

The following week he told me it had felt “so liberating” to tell his wife he was meeting an old friend for a drink, that it had felt cleansing to suggest new ways of doing a particular job at work, and it had felt empowering to give his own political view during a conversation with friends. He hadn’t felt guilty or frightened when doing this and that is, I suspect, because of this next intervention.

Tip three: Help them live it before they live it

I hypnotized Peter deeply and helped him rehearse feeling and being authentically assertive while deeply relaxed. I suggested we all come into the world purely authentic and asked him what it might feel like when he relaxes with friends, plays golf, and does his own thing a bit more.

But it’s not all about the future.

Freed from the past

We also used hypnosis to ameliorate some of the more damaging emotional conditioning from his past so he no longer pattern-matched troublesome past memories to current situations and automatically responded in the same old way.

He greatly enjoyed and benefited from the therapeutic hypnosis and, after five sessions, said he felt transformed.

Now of course we need to adapt sometimes, and not always be our full selves or voice our opinions. People who are inflexibly authentic may also be unremittingly obnoxious! There is a time and a place to tell your aunt that her new dress makes her resemble a rabid, pregnant Alsatian… and in fact, the time and place for that authenticity might be never and nowhere!

But where it counts and is needed, being real helps us feel more real.

When we are generally authentic we can better meet our real needs and often the needs of others too. Having a voice is our birthright.

Peter sent me a text shortly after our last session. It was a quote, recently read, that had seemed to jump out at him. I immediately recognized the wise and witty words of Oscar Wilde:

“Be yourself; everyone else is already taken.”

A Structured Approach to Treating Depression

If you sometimes find treating depression exhausting, Mark’s approach will give you a whole new perspective and lift your motivation for treating this most pernicious of conditions. How to Lift Depression Fast will show you the psychophysiological factors that hold depression in place and how to treat them quickly and effectively. Read more about Mark’s depression course here.