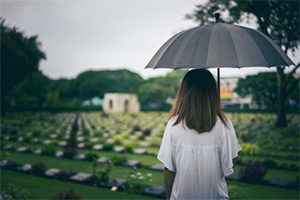 I have never met a person grieving a suicide who claimed it was anything other than an horrific experience.

When someone takes their own life the ripple effects go far and wide.  Far from the common suicidal sentiment that “people will be better off without me!” the resulting trauma and grief can spread much wider and deeper than the suicidal person could ever have imagined. I have never met a person grieving a suicide who claimed it was anything other than an horrific experience. And sadly, this tragic experience is affecting more and more people.

In the US, the incidence of suicide rose by 30% between 2000 and 2016.1 Alarmingly, this effect appears to be most pronounced among children and teens.2 Across the world men are three to four times more likely to die by their own hand than women,3 yet more women than men attempt suicide.4 Middle-aged white men were found to be most at risk in the US.5 In the UK, the figures are very similar.6

So while there are risk factors – being male, having access to lethal means, and an agitated and therefore impulsive state of mind7 – here I want to look not so much at causes and prevention strategies, but rather how we can help clients who’ve been bereaved in this way.

These tips comprise a blend of strategies rather than chronological steps. Often the very first – and sometimes worst – aspect we need to address is the sudden horror of the experience.

Tip one: Cut through the trauma so your client can grieve properly

In a previous article I described how I helped heal Susie’s trauma from finding her husband after he had killed himself in their garage. Before we could do anything else, In order for her to be able to grieve for the man and his life (rather than just being consumed by the horror of his death), we had to start by treating the PTSD itself.

There may be a traumatic element to any death of a loved one. But the shock and suddenness of suicide often produce extremes of PTSD in those left behind, especially if they found the person or, as happened to one client of mine, witnessed the death.

Terrible flashbacks and nightmares can stop often immediately after good trauma therapy. So always check for trauma which may be acting as a block to coming to terms with the death, and deal with it appropriately.

Existing alongside the horror (and continuing once it’s subsided) can be another feeling that can cause even more self-harming misery to your client as they try to come to terms with what happened.

When I was 22 I bumped into an old friend from school who I hadn’t seen in a couple of years. He asked me to go to visit him sometime, and I said I would. And I meant to. But life (including babies) got in the way, and the next thing I knew I was reading about his death. He had jumped from a church roof.

I felt guilty for a time. Would it have made a difference if I’d gone to see him? Were there signs of unhappiness I should have seen in our brief encounter? Was I somehow at fault?

Guilt can be a problem for many, and some people are more prone to it than others.8

Of course, your bereaved client may not have any particular guilty feelings, and perhaps the worst thing we can do is assume they must be feeling guilt. But those left behind are often plagued with thoughts of:

In a sense it was egotistical of me to think that simply popping by to see my friend might have gotten him off drugs and helped ward off what happened. It might have made a difference, but he was on a downward spiral and my influence over him probably wasn’t as powerful as my guilt had me, for a time, believe.

If you are adept at reframing you can help your client move beyond any guilt they may suffer.

Now, as you know, the art of reframing is not to contradict someone’s reality (not that this method of argument can never work) but rather to enter their reality in order to enlarge it and help them see wider contexts. Offering platitudes like “There was nothing you could have done!” may work. But your client may simply agree with you intellectually but not emotionally: “I know it wasn’t my fault, but I still feel guilty!” This is how guilt operates: it defies rigid rationality.

“Maybe you could have done something to help prevent this, maybe not. But one thing’s for sure, people are autonomous and we have less power over other people’s actions than we might sometimes believe.”

This idea is, you’ll notice, less all-or-nothing. It doesn’t deny the reality of the client’s perception, but it does start to widen it a little.

I’m not suggesting that saying one thing will necessarily change everything. But we can help the client come to see the greater context of what happened. After all, if I take total responsibility for your life I am, in a sense, denying your right to free will! We can never have total power over others – even in a tyranny, subtle resistance such as underground humour can still operate.

Ultimately we make our own decisions. Just telling this to someone may make them feel compelled to defend their emotional perspective. But communicating these truths metaphorically, in trance, or even through a kind of wondering aloud, as used so effectively in Socratic questioning, can, bit by bit, begin to dissolve the extremist perspectives of excessive guilt.

Ultimately we make our own decisions. Communicating these truths metaphorically, in trance, or even through a kind of wondering aloud, can, bit by bit, begin to dissolve the extremist perspectives of excessive guilt.Click To Tweet

Suicide of a parent, spouse, or child can lead people to examine their own roles in life. I should have been there for them. I was supposed to protect them! And yet, though we do have relational roles with people, we can never have utter control or influence.

Suicide by its very nature is sudden and often happens ‘out of the blue’. Coming to terms with such an extreme event requires, eventually, the adoption of less extreme viewpoints.

Alongside guilt, or sometimes alternating with it, may be a sense of anger at the deceased person.

These are common sentiments. And often these kinds of thoughts lead to even more guilt.

When something, or someone, is removed from us, anger is a common and perfectly understandable reaction. And in the case of a suicide of a loved one, it can even feel like a form of rejection.

After all, when someone ends it all they often can’t really see beyond their own psychological depression.

Depression is a self-absorbed state, and I mean this in a descriptive rather than a judgemental sense. To the extent that a suicidal person thinks about others at all, their thoughts may be so simplified and distorted as to not reflect other people’s perceptions at all (“Ah, they’d be better off without me!”).

As with all thoughts produced by strong emotion, thoughts brought about by (and also leading to) anger tend to be all-or-nothing. We may need to treat the anger in our clients as part of their healing process.

Clients experiencing anger and regret often feel like there’s no way they can legitimately express or resolve those feelings. And yet we can help our clients resolve them.

One way to do this may be by utilizing a universal human principle.

Ritual is important. There are rituals of laying people to rest, demarking one stage of life from another. There are countless social rituals we observe every day. There are even oft-missed but nevertheless powerful ritualistic elements to psychotherapeutic techniques.

Even people who wish to do away with all rituals (for example, as a way of escaping religion) invariably exchange one set of rituals with another. It seems we can’t help but ritualize life.

And we can use rituals with our clients. For example, I once asked a client to write down all the guilty thoughts they’d been having about their dead spouse. We sat in solemn silence as she placed these bits of paper in a box which she later, with some emotion and yet more solemnity, buried in her back garden. She was amazed how ‘putting those feelings in a box’ helped her contextualize what had happened and start to feel better.12

I have also sometimes gently asked clients, if I deemed it appropriate, what the dead person might think of their current guilt or anger or regret. Would they want the client to live the best life they could possibly live? This is the kind of question we should only ask if we already strongly sense the answer is a positive one.

I recall asking one particular client what her dead husband might say about all her self-recrimination regarding his death. During trance she imagined speaking to him about her self-blame and saying all that she had wanted to say to him. It was a powerful experience with a strong ritualistic element to it (after all, what are funerals if not a chance to “say goodbye”?).

She was reassured by this intervention and made rapid progress afterwards. Something had been resolved. An important emotional loop had been completed through ritual.

We also need to look at our client’s wider and current life.

Your client may face stigma, or feel that they do. They may find it hard to confide in others or “admit” that a loved one died by their own hand, as though this reflects badly on them. Isolation or at least privacy may be needed in the immediate aftermath, but over time this may turn into chronic isolation and a sense of dislocation or even severance from the community.

This might be compounded by other people not knowing what to say, fearing they might ‘say the wrong thing’, or assuming the grieving person wants to be left alone all the time.

We might need to help our clients reach out a bit more to their friends, relatives, and local communities.

Ultimately – and of course, time is a factor here – your client needs to live their life as best they can while meeting as many of their primal emotional needs as possible.

Continuing to live doesn’t mean forgetting the dead. Perhaps the best way for us to honour our dead is by living as best we can.

Mark runs a range of online courses to add to your therapeutic toolkit. You can read more about his courses here.