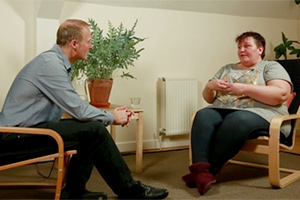 We’ve got something a bit different this time – a transcript of a client session that we filmed for Uncommon Practitioners TV. Do let me know in comments if this format is useful, or if there’s anything you think would improve it.

This client is a caring and kind woman. But she’s having a really hard time with her stepdaughter. Even though the girl can be quite cruel to her, the client clearly has her stepdaughter’s best interests at heart.

She fears the teenager will do things now that she will someday greatly regret.

But the client also feels somewhat unsupported by the girl’s father in setting boundaries and applying any kind of guidance to the girl.

She tells me that her stepdaughter will ignore her as though she doesn’t exist. This client has had real trouble sleeping because she worries, not so much about the way she, herself, is treated, but about the girl.

She feels she is seen as some evil stepmom and yet she really does care about this girl. In this transcript of the session you’ll see how I gather information, locate resources and help her form a goal for the session. The hypnotic induction I use with her to help her both sleep better and emotionally protect herself more is also included.

Mark starts off by gathering information in a very conversational way

“What’s the biggest thing that you don’t want to see happen?” This doesn’t sound like a solution focussed question but it is a way of starting to form a goal.

The client has been feeling quite alone especially as she doesn’t always feel in alignment with her partner over his daughter, although she does have good supportive friends.

The situation itself isn’t completely under the client’s control. What can be influenced is the way she responds to the stress of it.

Mark is also keen to locate resources in the client’s life.

Mark asks “how will you know that this session has done any good for you?” – a simple solution focussed question.

Mark uses the metaphor of carrying worries and so being able to put them down sometimes for the sake of rest.

When asking about the problem we need to know how often it actually occurs.

When asking about rumination we need to know the overriding emotional ‘flavour’ of that introspection. Is it anger, anxiety or some other emotion?

Any useful emotional tool such as compartmentalization can be overused or misused.

By talking about the client’s stepdaughter’s future self, Mark begins to widen the context a little. Context widening helps reframe events and is so useful when it comes to problems of all kinds.

It’s important to discover when and how a symptomatic episode finishes.

If a situation has naturally improved it’s so important to discover how that might have happened.

“How do you do that?” implies that this is something the client can have volition over.

The client at this point finds it hard to externalize those feelings by giving them symbolic shape.

Mark may be setting a task a little early here. The client covers her face and shakes her head for a split second. This may or may not signal resistance to the idea.

Worry is a type of dissociated consciousness and therefore a form of trance.

Mark begins a naturalistic induction based around the client’s love of digging in the garden.

Some rapid eye movement (REM) can be observed beneath the client’s eyelids.

Mark here is really talking about detaching from worry and attaching to nature.

Mark is talking about the brain and “neuronal pathways” to connect the client’s previously stated interest in the brain and her familiarity with brain related terms.

Mark reframes sleep as “connecting to the tempo of nature.”

Mark presents the idea of unconscious practice of the developing skill of compartmentalizing worry.

Mark is encouraging the use of the client’s observing self.

“You don’t have to know just how calm you can feel later on” is a suggestion for the client’s unconscious mind only.

Mark uses a truism … the fact that there are always a few seconds just before the onset of sleep. He does this to evoke that state of body and mind indirectly in the client.

Mark metaphorically refers to laying aside worries as putting down a rucksack after hiking.

Mark is now talking in a slightly more “everyday way” as a cue to the client that it will soon be time to awaken from trance.

Members of Uncommon Practitioners TV can watch this session now, and if you’d like to join, you can click here to be notified when UPTV is open for booking.