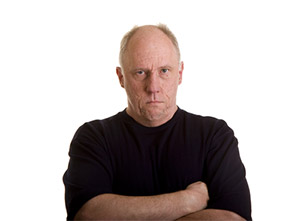 Helping your difficult client can be a challenge!

We’ve all had difficult clients, angrily resistant to your presence.  Here’s how I help mine meet their therapy goals.

There he sat, square in the chair, arms crossed, defiant.

60 a day, burdened body, sickly skin. Derek knew what the problem was. Out it came in his gravelly, raspy voice:

I met his gaze.

“So which bit of you wants to stop smoking?”

“Well, there are different bits to everyone, are there not?”

I let that hang in the air like stale smoke.

I asked him if he’d ever been in a team of any kind.

“So you’ve had to pass the ball to other players so your striker could get a good shot at the goal, then?”

“Yeah. It’s all about positioning, and setting things up.”

“Would you say it’s crucial for the team to ‘work together’ to get a good result?”

“Yes. If you don’t do your bit it lets everyone down. You’ve all got to pull together and not make things tough for other team members.”

And then I said:

“You know, Derek, it’s true there’s a part of you that wants to smoke… but there are many parts that don’t. The average human heart will pump, if it’s lucky, one billion times in a lifetime. Its job is to pump as many times as possible. It’s just trying to do its job. Your heart has its job to do as part of your ‘body team’. It never wanted to be squeezed. It never wanted to be prevented from working properly by some other part of you, to be held back… and I wonder if your put-upon heart finally had a say, a voice of its own… what it would say to you right now in words… if it could… about that smoking… “

By now Derek was displaying the glassy-eyed look of someone who has spontaneously entered hypnotic trance, so I quietly suggested he close his eyes as he sat there ‘listening’ to this very important team member.

Get your difficult client to work with the ‘team’

Next I went on to suggest that his lungs were also a vital part of the ‘team’. That they didn’t want some other part ‘sabotaging’ their work, constricting them and staining them so they struggle to work well for him. And he listened to what his lungs had to say about that smoking.

I got him to listen to the arteries of his body and what they thought about the smoking – how they were just trying their best to supply his eyes and genitals with the blood and oxygen they needed.

I suggested that all these parts were also him and these parts most certainly never wanted to smoke. I suggested that they could henceforth take a bigger part in the decision making. Not be pushed around any more by just one single bit of who he is.

I talked about how his hands depended on his heart and lungs for their continued existence in the world. I suggested that those hands would become heavy and numb with reluctance when it came to ‘betraying the rest of the team’.

When Derek finally said ‘No!’ to cigarettes, it wasn’t the bit that had thought it ‘wanted’ to smoke that was saying no. It was the much more important parts – his heart, lungs, skin and cells, and the part of him that wanted to continue to be in the world to love his family. The whole ‘team’.

If someone is smoking or drinking or abusing some other drug, or addicted to toxic behaviour, don’t waste energy trying to get them to ‘not want to’ do it.

Enlist the help of the parts of them that by their nature don’t want to be doing that, and draw out that motivation.

Derek stopped. Six months later, still free from cigarettes, he put the reality of thinking about smoking rather pithily:

“You know, it’s funny, but somehow my heart just isn’t in it any more!”