How to help your clients in pain beyond giving them sympathy 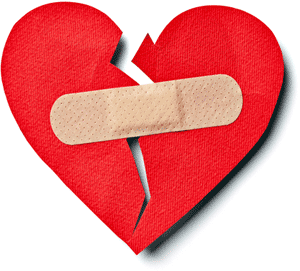 “I just still love him so much, and I miss him all the time!”

Samantha actually shook with grief as she tried to tell me of the pain of her recent break up with Paul, her love of seven years. He’d ended their live-in relationship with a gut-wrenching suddenness.

“It was like he just ripped a band aid off a wound I didn’t even know I had!” she wailed.

He’d told her bluntly that he felt they had “grown apart” and that he needed (yes, you guessed) “space” to move on with his life.

You’d think, from the way so many people talk about space and their need for it, that the relationship world is full of thwarted astronauts. Yes, Paul had read the Cliché Book of Break Up Platitudes, and hit Samantha with every one of them.

Five weeks later Samantha was in my office, dark shadows under her wept-out eyes, wanting my help in feeling better so she didn’t have to drink herself through the woozy gates of Slumber Land each night.

We talk of the ‘pain’ of break up and this word is more accurate than you might have realized. When we feel rejected from a relationship, the same parts of the brain that process physical pain become active. (1)

Love – or at least love gone wrong – really does hurt.

I sympathized with Samantha, of course, but could I really help her?

I didn’t make the pain go away all at once, of course, but here’s three things I did that set her on her way. And you can do them too to help those in need of romantic recovery.

If you’ve just stubbed your toe forcefully against the corner of the fireplace, you won’t take kindly to being told that the shrill scream of anguish coming from the wounded digit ‘isn’t real’.

So we don’t tell someone their agony isn’t ‘real’.

But nor do we drip feed them meaningless mumbles like: “I know just how you feel…” or – even worse! – keep on asking them how they feel, because, well, it will be pretty obvious.

On the other hand, if you actually do know how they feel from personal experience, you might like to talk about that. As long as your self-disclosure has a happy ending.

Which reminds me of tip two…

2) Once you’ve really heard them… tell them a story

When someone is in that kind of emotional pain, there’s nothing worse than jumping in too soon trying to make it alright.

Listen, sympathize, be calming by your very presence, give them time to really absorb the fact that you have fully taken in what they have told you. Then, respectfully tell them an anecdote or story that matches theirs, but leads someplace better.

You know, I can hardly imagine how you must be feeling right now, as if Paul was the only possible right person for you.

Years ago a woman came to see me who’d been through something similar to you, and all she could do at first was cry and cry and cry. The man she’d thought of as the love of her life had left her, and she felt sure at that time that she’d never get over it.

That’s the thing about pain.

Pain is peculiar – at the time you feel it’ll never end. It’s a surprise when it does.


Like the sun coming out after days of non-stop rain.

And she was quite surprised to notice after a while that she had stopped looking back through rose-tinted glasses. She started to be able to see that if he had felt the relationship wasn’t right for him, then it hadn’t really been right for her.

Quite slowly, but quicker than you might have expected, she began, like a seed starting to germinate, grow, bud and blossom after the seemingly eternal frozen winter, to come back to life again. She started to see her friends again, and to look on her relationship with the man she once loved as only one part of what her life had been, not the whole of her life. I don’t want to talk too much about how she met her new love and how happy they are now, because it’s way too soon to even think about that… (But you have mentioned it, though, haven’t you? You crafty so-and-so!)

Then change the subject.

Why? Because an abrupt change of subject that takes her attention to something else altogether can help her conscious mind leave aside the pattern of what you’ve described, while her subconscious mind assimilates the pattern as a blueprint for her own future.

Of course, if you know how to heal with hypnosis then use hypnosis to calm her (or him) right down, so that you can help them rehearse healthy behaviours and new patterns.

We all talk about the need to ‘move on’, but few talk about what that actually means.

When people ‘move on’ it essentially means that their brain has been able to process an event and mark it as past and specific, rather than present and global. When you feel that something is a past part of your life, rather than current and all-enveloping, it is much easier to move on from, allowing you to live your life fully.

Which leads us on nicely to tip three.

Someone is ‘traumatized’ when their brain is processing some past event (or series of events) as still present and not past. This means they still feel threatened in the here and now by what is really over.

When memories don’t fade it can be because of this traumatizing effect.

Breakups can be very traumatic. Samantha had frequent intrusive, almost ‘flashback’ memories to the actual time Paul had ended their relationship and was constantly reliving it as if it was happening right now.

I helped her process this memory through the Rewind Technique so that these intrusive thoughts could stop and finally feel past – no longer current.

Then we talked about meaning.

It’s easy to feel that a painful traumatic event is ‘meaningless’. I’m not suggesting that every trauma anyone ever suffers is always rich with potential wise learnings, but when you help someone focus on what they have learned from a break up, you can help them move on further.

This is because you’re framing it as something that in itself is past, but the learning they have gained from that past event is, by implication, all to do with helping them heal in a happier future.

When Samantha was ready, she told me that what she had learned was that it was important to respect herself within a relationship, and how “In the future” (words I was very happy to hear her say) “when I’m with someone” (at that point I got even happier) “I won’t just be thinking about what they need and want. It’ll be more about what we need.”

She was calm enough now to talk about the relationship as something that was truly past. She told me how she felt her anxiety at the way he’d treated her so thoughtlessly had made her made her more clingy than a limpet super-glued to a stick of chewing gum; hence his need to blast off into outer space.

Of course we worked together in other ways too. I encouraged her to continue seeing friends in order to stay engaged with her wider life as much as possible, and to sleep without having recourse to oceans of alcohol. And it wasn’t as long as you might have expected before she was really feeling that what had once seemed like everything had indeed been a very important something… but there was more to come in life.