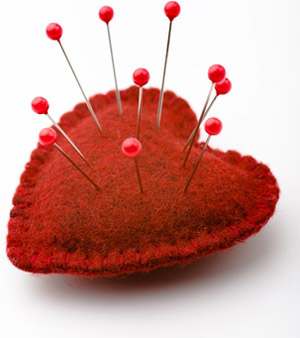 You and I know that a healthy, loving, secure and mutually respectful relationship shelters us from life’s storms and gives us solace, stimulation and support. Healthy relationships are good for us. (1)

But what if some evil destructive weed planted in the soil of past experience is choking the peace of mind, love, fun and true intimacy out of your client’s relationship?

What if your client is feeling so insecure that their insecurity itself (the fear that something is or will be wrong in the relationship) is the only thing that is wrong?

Seeing problems where there aren’t any is itself a problem. Of course, genuinely insecure people know this. But knowing it doesn’t help them.

It’s tempting to try to reassure insecure people that everything is fine, but being in a relationship with a really insecure person is not fine. Constantly reassuring someone who won’t/can’t be reassured is exasperating, enervating, and ultimately futile.

Of course, what your client really needs is to be able to reassure themselves and also to feel less need for reassurance.

Insecurity damages and can even destroy relationships

I’m going to destroy this relationship if I go on like this. And this is the best relationship I’ve ever had! Paul is a really loving, gentle, decent guy, and I do love him, but I constantly worry about how the relationship is going, and feel I have to check on him. Yesterday I must have asked him at least ten times what he was thinking. I know it’s driving him nuts, but I just can’t seem to stop!

Holly’s previous relationships had not been great. She’d been cheated on, and even abused and hurt. Her faith in relationships was shattered, even though she badly wanted this one to work. Classic ‘once bitten, twice shy’.

I managed to help ease Holly’s anxieties so she could start to feel more secure in her relationship and more confident and optimistic. As she began to feel better, she started giving the relationship room to ‘breathe’. She began to trust again and be less clingy.

Here are a few of the strategies I used with Holly and they might help you too, when treating insecure clients.

This is not to dismiss or belittle the very real pain and anxiety they’ve been in but to remind them what the reality of the situation is.

So instead of asking:

When you get these overwhelming anxieties and fears, how does it make you act towards him?

Okay, so how has the stuff you’ve been making up in your head about this been making you act towards him?

This might seem like a trivial point, but it really gets to the heart of the situation. It helped Holly to see her emotional patterns more objectively. It also prepared the ground for a technique I used with her which might surprise you…

Have you ever had a dream in which someone you know was bad to you and then woken up feeling angry towards that person – for real? The dream was pretty convincing, wasn’t it? Imagination is sometimes called ‘daydreaming’ and it too can fool you into believing in its ‘script’.

When (and only when) I felt I had developed a deep enough rapport with Holly, I suggested she close her eyes and then I suggested that, on the count of three, she could just imagine the sound of me clapping my hands once.

We did this, I counted to three, and then she imagined the sound of me clapping my hands together.

Then I asked her to imagine it again, but this time after the count of three I really did clap my hands together.

“What happened then?” I asked.

“You really clapped your hands!”

This can be a surprisingly powerful realisation.

You’re on your way to overcoming inner insecurity when you know that you can tell imaginings from reality.Tweet


You’re really on your way to overcoming inner insecurity when you know that you know how to tell imaginings from reality.

Also inherent in this exercise is the idea of ‘having to wait calmly sometimes’ when discerning what is real from what we’ve just made up.

We used it as an instigator for Holly to explore the idea further, to enable her to trust her imagination less automatically, so she could trust her relationship more.

Relationship insecurity is fuelled by anxiety (and habit). So we need to help our clients learn to associate having thoughts about their relationship with physiological calmness – feeling calm.

So helping our clients relax while they are thinking about their relationship is extremely empowering, because it helps them stop just seeing everything through the lens of distorted emotional agitation, and imagination gets to butt out.

I mentioned that relationship insecurity is partly driven by habit, and the next tip addresses a particularly toxic insecurity habit.

Assuming, being certain, that we know what someone else is thinking, because we can imagine what they’re thinking, is a sure way to break rapport with them. It’s guaranteed to make them feel misunderstood – by you.

Assuming we know what someone is thinking when we don’t is called ‘mind reading’.

I reminded Holly that every relationship needs ‘room to breathe’ and used the analogy of a garden needing to be tended – but not every two minutes! I suggested to Holly that it’s a mistake to assume that just because someone isn’t talking to you right now, something must be wrong.

Holly had fallen into a pattern of starting many conversations with Paul with “What’s wrong?” Not even “Is there something wrong?” Not surprisingly, Paul had started to withdraw further and further because all this interrogation made him feel that she didn’t trust him to speak his own mind, or even know his own mind.

I taught Holly to relax with letting Paul have more privacy with his thoughts (or lack of), to tolerate the uncertainty of not having to know all the time, and to remember that many men relax by not talking.

5) Focus on the differences

Holly, like many recovering relationship insecurity sufferers, had been hurt in the past, and in the same way that someone may come to fear all dogs because they were bitten by one particular dog, she had felt unable to trust.

The part of the brain that processes threat tends to try to keep us safe in future by ‘erring on the side of caution’. It does this by making us over-generalize the threat from a specific event or experience (or collection of experiences).

I got Holly to write down all the ways in which Paul was different from her abusive, cheating ex. I then encouraged her to relax and while in trance really reflect and absorb those differences and ponder the true nature of trust.

6) Help them avoid ‘the certainty trap’ and trust properly

Holly and I spent some time talking about how trust is faith, not certainty.

People often misunderstand this. It’s vital to know that even the most trustworthy person can’t ever prove 100% that they are trustworthy. Doubts can always be created around anything and anyone.

You have to look at your experience. What has consistently happened in the past? All you can do is go by your past experience (that it’s always shown itself to be reliable thus far) and have faith,informed by your observations of it, that it can be trusted in future.

You will still be disappointed sometimes.

That’s as much certainty as anyone can have.

7) Help them spread the risk

At the heart of relationship insecurity lies pessimism, a lack of any faith that the future can be a good place to be: “Is he/she going off me?”, “This is too good to last!” – you know the kind of thing.

This leads to the desperate compulsion to keep checking: “What did he mean by that? No, but, what did he really mean?”

If you feel that one thing in life (like your relationship) is everything, then you are bound to be terrified it might end.

I got Holly to remember all the other parts of her life, and (encouraging her to develop and maintain interests and friendships outside of her relationship) I got her to imagine the terrible ‘what if’ itself. And to imagine herself being really upset but surviving, being okay, the world not ending and her still going forward in life.

This was incredibly powerful.

When someone really fears something, they avoid it in their mind, but you can ask them:

Okay, so if that did happen, what sort of things would you do to help you get through that difficult time?

Notice how you’ve framed it as a ‘difficult time’ – not as a ‘disaster’ or a ‘catastrophe’. Really help them focus on all their resources and what they’ve learned in life so far that would help them get past that time.

Paradoxically, we can help people feel more confident by thinking about the possibility of something going wrong if we also help them feel confident that if ‘the worst’ did happen, it wouldn’t actually be ‘the worst’, and they’d be able to manage it.

Nothing in life is certain and being able to relax with the uncertainties with the confidence that ‘whatever happens I’ll be okay’ is true emotional security. People often seek that emotional security in the wrong place by asking for a certainty that doesn’t exist – unless you are completely outside of time and can see all that has and will ever happen!

Holly and Paul’s relationship improved, Holly felt more secure and Paul felt closer to Holly because of it.