How to deal with conditioning effects from prior abuse 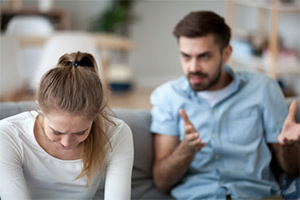 An abusive relationship is one in which coercions and controls are extreme, prevalent, and systematic.

“A sickly fear comes over me. I see him in a crowd, then look again and see it’s not him!”

“Whenever I try to start a new relationship I get so defensive because of the way my wife battered my self-esteem!”

Sometimes, maybe often, we work with clients who are suffering the ill effects of having been in an abusive relationship in the past. These after-effects may be preventing them from moving on to form new or better relationships. The damage to their self-esteem may be yet to heal, or they may feel afraid or unworthy of being loved.

They may have been conditioned to become, counterintuitively, hooked on the highs and lows, the inconsistent – and therefore more addictive – rewards of the hot-then-cold, unpredictable lover. They may have come to feel that a ‘nice’ partner is boring.

The after-effects of an emotionally or physically abusive relationship can include extreme emotional insecurity, chronic fear of abandonment, trust issues, or even symptoms of post-traumatic stress disorder. The impact on your client’s current wellbeing depends in part on the extent and severity of the abuse they endured.

The currents of everyday coercion

Most relationships contain some elements of coercion or manipulation.

This might not be a popular idea, but if you carefully observe people you know, you’ll see the truth in it. Even in loving relationships you’ll notice little currents of coercion here and there. A pinch of “after all I’ve done for you!” or a smidgen of ”you could at least do that for me!” isn’t uncommon. “You certainly don’t have to come to the six-hour trainspotters AGM with me, but I’ll be so disappointed if you don’t!” That type of thing.

Most reasonable people, for the sake of compromise, don’t mind a little subtle coercion here and there from their partner. In fact, they may not even notice it. Partners find ways to get what they want in the relationship as well as compromising and helping their partners meet their needs. Subtle pressures and controls comprise a greater part of everyday human interaction than perhaps we’d all care to admit.

But an abusive relationship, of course, goes far beyond this.

I would suggest an abusive relationship is one in which coercions and controls are extreme, prevalent, and systematic.

It doesn’t always, and in fact usually doesn’t, start out this way. But as time goes on, people can go from subtle to extreme. Like the poor poor frog who eventually gets boiled because he didn’t notice the water gradually warming up, the target of abuse may not even notice this happening. Often the onset is often so gradual that even as the pressures of coercion and control rise to an extreme level, it still feels ‘normal’ to both the perpetrator and the victim.

Like the poor poor frog who eventually gets boiled because he didn't notice the water gradually warming up, the target of emotional abuse may not even notice it happening.Click To Tweet

Friends and relatives on the outside may find it hard to believe that the victim of the emotional abuse could put up with it. But when you’re in it you can’t see it. At least, not always.

When a client has been ‘gaslighted’ in a previous relationship – that is to say that the abuser continually got them to doubt their own perceptions (or even their rationality or sanity!) – they may come to believe abuse is actually ‘help’ or deserved punishment. Some people become, in a sense, indoctrinated by fear and hope, the ‘good cop/bad cop’ routine, the appealing idea that “that’s not the real him!” They may start to have a tough time not feeling that they are, in some way, to blame for the terrible treatment they received.

Abuse can take the form of constant criticism, extreme emotional blackmail, contingent affection or approval, threat of abandonment. punishments such as stonewalling, the ‘silent treatment’, public humiliation, or even physical abuse. An abusive partner may be narcissistic and therefore unable to really be in a relationship with anyone but themselves. They may even be a psychopath.

I think this brainwashing aspect of emotional abuse is often overlooked when we look at strategies for recovery.

Emotionally abusive partners may tell their target that they are being treated as they are “for their own good”. They tend to place all responsibility on the abused partner: “You made me do that!” or “If you hadn’t done that, then I wouldn’t have done this!”

They may have been extremely controlling and jealous and, like a cult, they may have tried to separate your client from their friends and family so they could be the one and only influence on your client in a kind of echo chamber of two people. In fact, abusive relationships share many similarities with cult psychology. Disagreement of any kind, acting without permission, or even going out alone may not have been tolerated.

Whom we get involved with can have major ripple effects in our lives. Clients who have come out of abusive relationships may suffer the effects for years. They may have become extremely insecure and distrustful of becoming intimate with new people. They may suffer worse self-esteem in general.

So what principles might we use to help our clients truly move on from past abusive relationships?

People often defend their abusers or ex-abusers in some way. This may be misguided loyalty, a kind of Stockholm syndrome, or because sometimes the ex could be charming, loving, and so forth. When someone who generally punishes you withholds that bad treatment, it can feel like a kindness.

So simply badmouthing a client’s ex if they don’t do this themselves may break rapport. But we can ask the client gently what effects the relationship has had on them. Many people, particularly if they are empathic by nature, will tend to blame themselves when relationships don’t work, and even more so if they’ve been continually blamed by the other person. It’s as though they pick up the blame baton they’ve been handed and just run with it.

We could explore the justifications their ex used for treating them badly. It can be all too easy to explain away terrible behaviour. Maybe the abuser had a bad childhood; your client isn’t perfect either… and so forth. But ultimately bad treatment is bad treatment, whatever the cause.

We don’t have to judge the ex-partner, but we can Socratically explore with the client whether anyone deserves poor treatment, justifications used by perpetrators for poor treatment, common thinking errors such as “if I had only loved them enough the abuse wouldn’t have occurred”, and that kind of thing.

What was it about the perpetrator, not your client, that led to this bad treatment?

But while it can be useful to look at what happened and why, ultimately your client needs to look towards the future in ways that can help them meet their needs healthily.

Tip two: Deal with the ‘once bitten, twice shy’ factor

When we have been emotionally conditioned by events, we are prone to make faulty pattern matches. We might come to feel that all dogs are dangerous after being bitten by one, that all car trips will end in a crash after experiencing one accident, or that all men are bastards or all women cheats after having been badly treated by one or the other.

These aren’t cognitive distortions, per se – the client will often be able to easily rationalize the unrealistic nature of the faulty pattern match and its extreme overgeneralization – but they can still subsist on the emotional level. We all know what it’s like to think one thing yet feel another.

So we need to help the client overcome any strong emotional conditioning so they no longer produce these faulty pattern matches. We might use the Rewind Technique to decondition traumatic memories, or make use of other hypnotic techniques to help them let go of the past.

Working at undoing past emotional conditioning will help loosen emotional overgeneralizations and therefore alleviate fear that all new relationships will inevitably be like the abusive one.

We can also encourage our clients to consciously make a list of how a new partner or situation is different from the old, threatening one. This can be a really useful exercise and help deconstruct negative overgeneralizations. For example:

People move on when they can approach life afresh. And sometimes that means helping them get back to a sense of who they were before the abuse.

Tip three: Reconnect with who they really are

People often, perhaps invariably, change after having been systematically abused. The transformation can be shocking, even pitiful.

Confident, outgoing, fun-loving people may seem to shrink into shadows. They get worn down, doubt ridden, and even plagued by guilt for not having made the relationship work. They may feel stupid for having allowed themselves to continue in the toxic relationship for so long. Often there is a melange of different feelings, some of which may seem to be contradictory.

We can suggest to our clients that they can keep the learnings from their relationship, but that the damage can mend.

We might hypnotically reconnect them to the past, before the relationship (or series of bad relationships), so that they can access the associated feelings of optimism, openness and self confidence (or however they have told you they used to be). We can help amplify those feelings and remind the client that they are not what happened to them, but so much more than that.

When we are indoctrinated through repeated strong emotion, we lose our own perspective. One client, Ann, told me after a few sessions that she could finally see life and herself through her “own eyes” now, not his! Ultimately this is what we want for our clients: to see through their own eyes, to feel calm and open and optimistic again – or perhaps for the first time.

A sense of dignity is important for all of us. We all deserve the opportunity to rise up above and beyond what has happened in the past.

How to De-condition Traumatic Memories Quickly

Trauma, or PTSD, can underpin many psychological problems. Its ‘hair trigger’ nature can make it difficult to treat. However, once you understand the principles of keeping the client calm and dissociated from the memory while it is gently deconditioned, treatment becomes, in most cases, simple and straightforward. You can learn how on Mark’s online course.