How too much praise can make you fail

Praise is wonderful, isn’t it?

When someone praises me, I get a lovely warm glow inside and feel great. And they say that the quickest way to get round someone is to flatter them. You have probably enjoyed being praised in your time too.

Maybe you’ve also had that slightly uncomfortable experience of being praised for something you thought was ‘just doing your job’, or for doing something perfectly ordinary and unremarkable.

That discomfort points to some interesting aspects of praise. Is it all it’s cracked up to be? Can praise, can being praised, actually make you less successful?

Now first off I have to say that I’m all for positive motivation. Letting people know they’re doing or have done well can be vital sometimes.

No one likes to be criticised all the time, and only told what they don’t do well. Constant criticism can feel like bullying, and if you never get any positive feedback you can fall into self doubt and despondency.

But, as with all things, it’s the balance that counts. This is not just common sense – the research tells us that excessive and constant praise can actually be damaging to self esteem and personal effectiveness.

Praise and self esteem

The so-called ‘self esteem movement’ that came to prominence in the 1980s and 90s would have us believe that praise and positive encouragement is something you can’t have too much of. If a little praise is good, then a ton of praise must be even better, right?

The theory is that to raise self esteem we must tell each other how wonderful we all are, all the time. A constant diet of positive reinforcement and encouraging affirmations will – so the adherents claim – make us academically smarter, persuade us to come off drugs and get us to perform better on every level. Constant praise will lift the self esteem of the whole world and make everything better. However, like many other over-simplified ideas before and since, it doesn’t quite work like that. And in some ways, as I’ll explain, it backfires in a decidedly destructive manner.

Think of praise for a moment as a kind of food or medicine. No one would argue that healthy nutrition or necessary medication is a bad thing. But it’s also clear that what’s good for you in small or measured doses can be bad for you if you have too much of it.

We all need a correct and balanced dosage of food or necessary meds. Too much food, no matter how healthy it is, can make us sick. One headache tablet may help your head feel less sore, but a hundred tablets will not make you feel one hundred times as good.

Everything requires appropriate dosage, from exercise to allergy pills.

It’s the same with communication – including, of course, praise. What strength of dose is required? How often should it be administered? Constantly praising someone to the skies can make them addicted to praise. Addiction to praise can be as destructive in its way as any other addiction. It can make you incapable of doing anything effectively without your ‘fix’.

It’s a little understood fact that too much praise can be really bad for children, for clients, for patients and, yes, for you and me too.

The unintended consequences of excessive praise

In a study first published in 1998 in the Journal of Personality and Social Psychology (1), children were rewarded for simply ‘doing their own thing’ – drawing, playing and so on. But when the rewards were discontinued, the children tended to lose interest in the activity.

So, expecting praise for doing things can pretty soon make that thing seem not worth doing at all if you don’t get the praise.

But there is an even bigger danger in becoming addicted to praise.

The dangers of exceptionalism

The late great Dr Milton Erickson used to say that he was wary of over praising his patients for doing things that they should be doing anyway.

He found that giving too much praise to a patient for starting to work, or socialising with friends, or being polite in public, sent the message that what they were doing was out of the ordinary, that it was special in some way. Whereas, of course, what they really needed in order to live a healthier life was to assimilate such patterns of behaviour as normal, everyday and not especially praiseworthy. I don’t expect to be constantly praised for not mugging old ladies.

This is not to say that we shouldn’t acknowledge positive changes in people, but over-doing the praise can be dangerous. This is because if we imply that something is exceptional then that makes it the exception to what is actually normal. Constantly praising me for not mugging old ladies implies that mugging old ladies would be more ‘normal’ for me!

We don’t want healthy behaviour to be seen as exceptional.Tweet

“Wow! That’s amazing! You managed to meet your friends for coffee this week! You are so brave!”

“It’s good to hear you’ve started meeting your friends for coffee. That’s a much more normal way of living than staying shut in your room all the time.”

Here we acknowledge the good step but emphasize its normality, reinforcing the idea that being stuck in one room by yourself is the less normal state of being. Meeting friends for coffee shouldn’t be the amazing reality-defying exception.

In parts of the United Kingdom, the Education Maintenance Allowance (EMA) pays young people up to £30 a week for attending classes. Not for passing exams. Not for learning. Just for turning up. This benefit is intended to make it easier for young people between 16 and 19 years of age to continue in education, which is a praiseworthy social aim.

However, many college teachers have reported seeing more disruption in classes from EMA recipients, some of whom don’t appear to feel under any obligation to learn anything while they are there. They are ‘rewarded’ for the exceptional effort of getting their butt into the classroom, so why make any further effort?

Being rewarded, whether with money or over-the-top praise, for doing things you really should be doing anyway, can diminish genuine motivation.

Excessive praise might be well intentioned, but it can work against your and other people’s genuine best interests.

Imagine a self-harmer, maybe someone who cuts themselves with a blade, or smokes cigarettes. This person routinely harms themselves.

Now if a self-harmer starts to resist this self-sabotaging behaviour that, of course, is an excellent thing. But if you try to encourage them by showering them with excessive praise for not doing what they shouldn’t be doing, this ‘encouragement’ carries a malign subtext.

Hugely praising someone for being ‘strong’ and ‘brave’ in not smoking implies that it is – and always will be – a continual struggle, requiring huge degrees of courage to not self harm. I would much rather convey the message:

Consider positive behaviour on its own, you know, those worthwhile things that we could be doing, like giving up time to help others, or signing up for a course in some subject or skill. Imagine a person who would only ever consider engaging in such activities if someone guaranteed to keep telling them how wonderful they were for doing it.

How genuinely effective would such a person be?

Positive labels can do as much damage as negative ones

Excessively praising someone could actually make them less happy in the long term because it can diminish their capacity to find intrinsic reward in anything. Which would be a massive handicap. We need to move on from labelling good actions and good behaviour as out of the ordinary, even if we are only doing this implicitly.

Praising children for turning up to school, not being disruptive or actually handing in their home assignments is poor preparation for a life of real excellence, because we are turning ‘normal’ into ‘excellent’ and genuine excellence thus loses its value.

Making a huge deal out of anything someone achieves – or attempts – may just be encouraging ‘praise addiction’. And being a praise junkie is an impediment to real success. The weird fact is that being positively labelled may be as detrimental to genuine success as being negatively labelled. 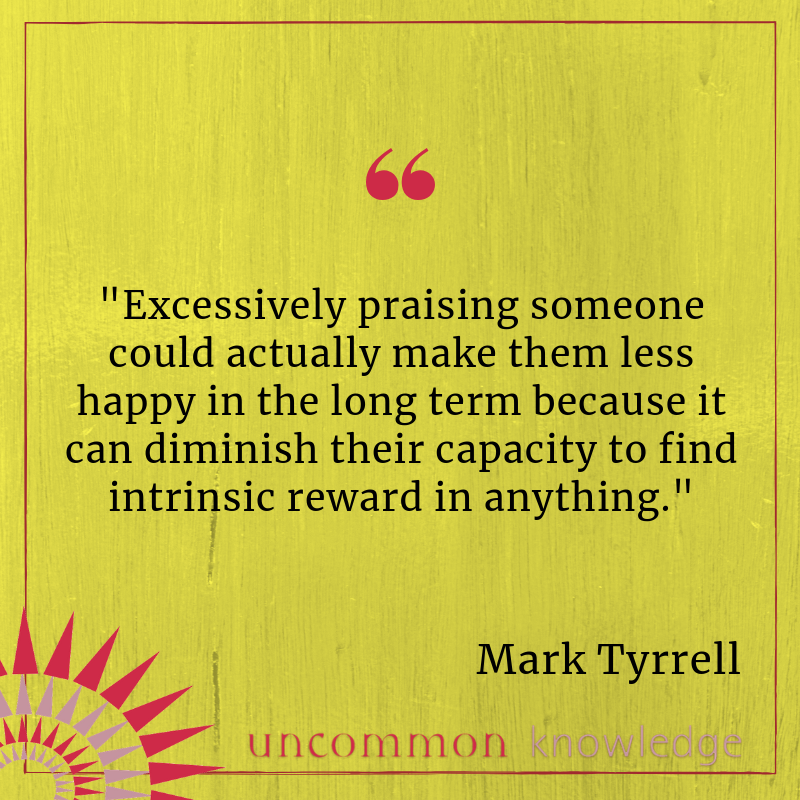 This, in fact, was the conclusion of an extended study conducted by psychologist Carol Dweck and her team at Columbia to investigate the impact of praise on students in twelve New York schools (2). They found that kids who were praised for ‘being smart’ stopped making an effort much earlier than kids praised for ‘working hard’.

The students were all given an easy test consisting of a set of puzzles, and were then given a single statement of praise (regardless of the actual results). Half were praised for their intelligence, the other half for their effort. They were then offered a choice of two further tests. One of these was more difficult than the first test, but the researchers told the students that they would ‘learn a lot’ from attempting it. The other was a simple test, very like the one they had done first.

Well, why would you risk losing that lovely praise which seems, after all, to be the object of the endeavour?

The trouble is, empty praise can make looking smart more important than being smart. The self-esteem movement has focused on praising people just for ‘being who they are’. It didn’t warn us of the possible dangers of doing this.

How to handle praise

So here’s the take home message:

Sugar is nice, but a little goes a long way and too much can really screw you up.

The right kind of praise at the right time and in the right quantity can help you develop the habit of excellence, but a diet of uncontrolled praise won’t do you or anyone else any favours.

For more information on self esteem, see my online course: How to Lift Low Self Esteem in Your Clients.

Why Affirmations and Compliments Don’t Boost Low Self Esteem

How To End Therapy With Your Clients