How to Help Your Client Overcome Their Limiting Beliefs 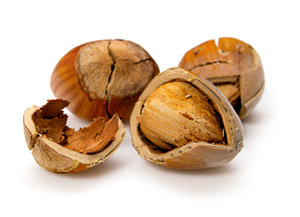 “You must think I’m an idiot!”

“I know exactly what’s going to happen, I’ll just go and make a fool of myself again!”

As a therapy practitioner, I know you’ve heard negative limiting beliefs like this again and again.

And boy, do they ever cause problems.

They lurk unexamined like scary sea creatures skulking beneath the waves of consciousness and can only be seen for what they are once they are raised from the murk and viewed in a wider context.

So how do you start bringing damaging assumptions into the light of day without it being overwhelming?

Cognitive reframing is an art as well as a science

A reframe, done artfully, can certainly help people think differently, more widely and creatively. But a cognitive reframe should be able to appeal to emotion as well as logic. That’s why learning to deliver reframes in a way that makes them intensely compelling is so important.

When writing my new book on reframing and creating our new course Conversational Reframing, it became clear that the delivery and ‘clothing’ of the reframe is vital. 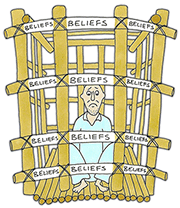 For a reframe to ‘take’, it needs to be delivered during a time in which the client’s attention is locked on what you are saying so that they are more open to new and healthier perspectives.

So what kinds of cognitive distortions might we need to reframe to help our clients lead happier, more fulfilling lives?

Here’s a quick rundown of some of the types of assumptions that operate below the choppy waves of life. You’ve probably heard more than a few of these:

Nothing ever works out for me.

I guess I just wasn’t meant to be happy.

It’s karma for the way I treated my first husband!

I’ve somehow brought this disease on myself.

She must really hate me now!

They all think I’m stupid.

He’d rather go out with her than me!

My mother was a depressive, I must have got it from her.

This anxiety/depression is a medical disease, just like Type 1 diabetes!

I know exactly what’s going to happen! They are all going to hate me!

It’s just not right. People just shouldn’t behave like that!

I would never do that!

She broke up with me because I’m not like her first boyfriend.

My friend gets so much male attention, I’ll never be as attractive as her.

He’s trying to make me feel guilty for not having done enough overtime at work.

I could never get a job like that in marketing because I’m an introvert.

My marriage fell apart. I screw up everything!

My boss was in such a weird mood today. I must have done something awful to upset her.

I’ll never meet anyone else I like as much.

I’ve never had any success and I never will.

There are plenty more where those came from, but those are a few of the kinds of assumptions that limit people’s lives – and often remain untroubled by any direct challenge.

Oh, and you may have noticed something about all these interpretations…

The problem of negative certainty

That’s right. They are all extreme.

Now, don’t get me wrong. These subjective interpretations of situations may or may not reconcile with the way things are for a particular person. But one thing’s for sure. We and our clients can’t assume that they represent reality. And even if they represent some parts of reality, they probably never represent as much as the cognitive distortion would have the client believe.

Being too sure that your own take on something – especially a highly emotive issue – is right can lead you down so many wrong paths and is something to overcome.

There is nearly always another more moderate and subtle way of seeing.

We know that when people depress, get angry, or feel any strong emotion, reality becomes biased for them. They become less objective. So part of treatment can be a gentle (I don’t even want to say ‘challenging’) exploration of someone’s assumptions.

When people depress, get angry, or feel any strong emotion, reality becomes biased for them.Click To Tweet

Now, how best to do that?

1) Cast doubt with a subjective frame

Of course, you need to respect what your clients believe, because clashing too crassly with someone’s belief system can break rapport in the blink of an eye, regardless of how ‘positive’ you are trying to be (as you can see, for example, in the dangers of excessive praise).

But you can specifically and overtly frame their ‘statement of fact’ as an ‘opinion’ or ‘idea’ when you feed back what they’ve said. This is a gentle first step to deeper reframing later in therapy.

Client: “Nothing is good in my life, nothing!”

You: “It’s really horrible to feel that nothing’s good, isn’t it?”

So you’re not explicitly saying: “Ah, that’s just your take on it,” as that can be so easily rejected. Rather, you’re communicating sympathetically in a way that carries a subtle reframe.

2) Have them ‘modify their position’

To help people properly, you sometimes need to get specific.

“My whole life is a mess!” is a generalization. If someone tells you they “can’t do anything right”, you could ask them if they know how to tie their shoelaces, how on earth they managed to find your clinic, or whether they know how to switch on their TV.

I’m not suggesting you use exactly those examples (although, knowing me, I probably would!). But what I’m saying is, it’s easy to get sucked into the emotional extremism of someone with emotional difficulties.

When your client moves away from emotional extremism and becomes more moderate in their responses  – and therefore in their cognitive interpretations – then therapeutic progress can be rapid.

You: “I think you mentioned you have a lovely daughter.”

You: “And you mentioned you felt there is nothing good in your life. So is it fair to say that there is at least one good thing in your life?”

You: “Okay, so what I’m interested in here is getting a bit more specific with what you want to be better in your life, because depression has a way of conning people into thinking in absolute terms and we’ve just seen that in action.”

3) Where is the evidence?

Strong emotion makes us second guess the future or makes us feel convinced we know 100% for sure the way things are.

Learning to relax with uncertainty can directly improve the mental wellbeing of your client.

Being able to sit pretty with not knowing whether we’ve upset someone or whether our date will like us or how the first day at work will go is a great life skill. Refusing to jump to negative conclusions or be sucked into believing one’s own scary imagination helps clients break through much of the over thinking and feeling that accompanies so much emotional distress.

Knowing how to hold a meaning vacuum until real evidence comes along is something you can teach your clients. The calmer we can be, the more able we are not to prematurely speculate. So knowing how to relax your client so that they can see reality more in the round, with less bias, is a vital therapeutic skill.

Telling your client that you’re struggling with what they have told you because you’re “not sure the evidence is strong enough” is a neat way of helping them question their own negative certainties without directly clashing with them.

Client: “She really hates me!”

You: “Has she told you in so many words that she really hates you?”

You: “Did she tell someone else who has told you this?”

You: “So, what evidence is there she really hates you? Is she the kind of woman who is full of hate?”

You: “I’m interested to know how you know she hates you.”

Client: “Well…she must do, after what happened…”

You: “It’s certainly possible she might, but the evidence so far doesn’t look so good.”

Client: “What do you mean?”

You: “Well, we have to live by feedback and evidence, I think, at least some of the time. And from what you’ve said about what she’s like as a person, the lack of concrete evidence that she hates you, and some evidence you mentioned earlier that she’d still like to make a go of it, I’m struggling to understand why you feel she must hate you. Maybe there is some evidence I don’t know about…?”

Notice there is no arguing or telling the client they are wrong, just an encouragement of more objective thinking.

You can also ask people simple questions like: “Just as a thought experiment, what would be another way of looking at that?”

You may often hear people say things like, “Yes, I know logically I’m not really stupider than other people, but I feel as if I am.” This way of talking is one of the tell-tale signs of hidden assumptions lurking below the surface of the mind, secretly driving the way people view the world and sometimes blocking real hope from growing and flowering within them.

It’s only when we dredge up those dark shapes from beneath the choppy waves of feeling that we come to see that what seemed to be all powerful monsters are, in fact, bits of old weed that can be discarded, now we can see them for what they are and can enjoy casting our eyes across the vastness of the open sea and land.

Click here to read how my online course ‘Conversational Reframing’ shows you how to craft cunning reframes and slip them past your clients’ conscious criticisms.