Confessions of a Reluctant Workshop Leader

Or why my terrifying first course was the first step to success, even if it felt like the last step I’d ever take 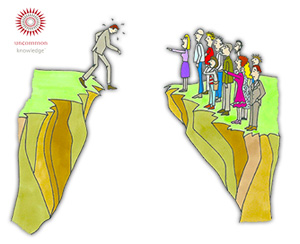 Hosting a workshop can seem scary, but it can also be full of opportunity

I ran my first ever workshop by accident. I didn’t want to do it. But as a father struggling to get by on a minimum wage job, I couldn’t not do it.

I worked from an alternative health centre in Kemp Town, Brighton. I was holed up on the top floor of an old tumbledown building in a seedy part of town.

I’d qualified in hypnotherapy in 1993, but now what? One year on, I was seeing three clients a week if I was lucky.

After I graduated, I couldn’t believe people would pay me £30 (remember, this was 1994!) to let me help them. At first it seemed like a lot, but as time went on it became painfully obvious that it wasn’t enough. I kept on hoping I’d increase my client numbers and make some kind of half-decent living eventually. But the truth was, I was going nowhere fast.

Then one day Bob, the owner, told me about a public open day. Would I give a speech on hypnotherapy?

I shook my head firmly, and said yes.

A public talk! The last time I’d spoken in public was at school. At fifteen, I’d been the subject of merciless jeering (the teachers could be very cruel!). But I wasn’t a kid anymore. I was an adult, about to do an adult thing, to talk to a bunch of adults! Fear and excitement wrestled, but excitement never stood a chance.

Want to see time speed up? Dread something. The big day was upon me before I knew it.

When I arrived the room was already bursting with practitioners exuding knowing confidence, elan, sang froid, and other French words I didn’t know the meaning of. At least, that’s the way it seemed to me. Soon ‘the public’ began to trickle in, looking menacingly good-natured. The fact they were arriving at all was menacing enough.

Desperate for some last-second public speaking tips, I keenly observed the acupuncturist urbanely discussing pricking, the homeopath smoothly explaining dilution, and the herbalist elegantly propounding the properties of plants.

They all had one thing in common: they sounded polished, sophisticated, and unselfconsciously affable.

Then it was my turn.

My impending sense of doom heightened as more and more people filtered in. I was about to leap into the ink-dark depths of the unknown, and every man and his dog was here to see it.

In fact, more people wanted to watch my talk than could even fit in the room. People were packed in shoulder to shoulder; some were even craning their heads from out in the hallway. All to hear this young (as I said this was 1994) guy talk about hypnosis. The terror mounted. But there was nowhere to go.

Like a newborn deer taking its first steps on greased ice, I took the podium.

And you know what?

No one asked for their money back. Sure, it was because they hadn’t paid any. But I realized at that moment that all along, that’s what had been bothering me. That’s what had been niggling away in the dim recesses of my frightened mind. That maybe what I had to say didn’t have value.

There was a real interest in what I was doing! If so many people found hypnosis that intriguing could I factor group work into my business? What if all those people had paid to learn about hypnosis? A week later, buoyed by the interest in my talk, I printed 300 leaflets emblazoned with the unimaginative slogan, ‘Learn about hypnosis.’

Whatever little I knew about presenting, I knew even less about marketing. I spent the next week plodding the rain-washed streets personally distributing those fateful flyers. I wandered diffidently from café to café apologetically advertising my weekend workshop.

But as soon as the flyers were out there my enthusiasm turned to trepidation. I found myself desperately hoping that people wouldn’t sign up. Then I’d have to actually run the thing!

Cheques (did I mention it was 1994?) started wafting into the health centre. Bob would wander in at least once a day to excitedly present the next batch of applications. From just 300 leaflets, I garnered 16 participants. Each paying £65!

Gobsmacked, I realized how easily a bundle of money could be made in one go. I took the equivalent of six weeks’ wages in one weekend!

I felt as if a ray of golden light had finally penetrated the gloomy canyon that was my financial life. I had to follow this light. I’d found a path, a real path. Paths don’t manifest every day, but when they do, they need to be followed.

Paths don’t manifest every day, but when they do, they need to be followedClick To Tweet

The workshop arrived almost as quickly as the public talk had. But this time I was ready. I had my speeches prepared, exercises to demonstrate, literature to hand out. And the whole thing went well.

Sure, I was naive. I didn’t collect the names of the attendees or mail them. As far as I was concerned it was a one-time thing. But I did get a couple of referrals and, above all, just having done it gave me a warm glow.

In the following days and weeks, I realized I wasn’t finished with what I’d started. So I ran more workshops and, gradually, I got better at it. Then, in one of my day jobs, I met Roger Elliott. It was a meeting that would change the course of my life.

Roger and I started running hypnosis workshops together, and in no time we’d expanded to service Brighton, Nottingham, London, Cambridge, and Bristol. Roger brought a rigour to the process that I could never have done on my own.

We formed a database to record our attendees, made CDs for our delegates to buy, and printed proper notes. We improved the flyer design and copy, and distributed them in the thousands, not just the hundreds.

All the while I was picking up more and more new clients. Not just attendees, but their family and friends as well. Suddenly I was making a living – a real living – doing what I loved. I was seeing up to 20 clients a week, and the vast majority were from workshop referrals.

What’s more, I grew to love presenting our workshop. We taught people about hypnosis, the REM state, and language patterns. People learned how to take others into trance and how to self-hypnotize. I would demonstrate how a phobia or traumatic memory could be lifted. People loved it.

In 1998 we formed our company Uncommon Knowledge, and in 1999 we taught our first diploma course.

I was giving the best of myself to the world, and I was being rewarded for it. And none of it would have happened if I hadn’t said ‘yes’ when I meant ‘no’ all those years ago.

I didn’t know it at the time, but that initial faltering talk and those 300 paper leaflets were the turning point on my path to the present.

Nearly a million people around the world now read my articles every month, and our hypnosis downloads help people of all nationalities, religions, and backgrounds. Thousands of practitioners of all kinds read this therapy blog and learn hypnosis and other psychotherapeutic techniques from me online.

‘Me’ became ‘we’ as Roger and I built the Uncommon Knowledge team to become what it is today.

What do I put that down to?

The Internet has been like magic to me, but if I were to start out again today, you know what? I would begin offline. I would run workshops and build them up alongside online work.

If you don’t yet have the World Wide Web working for you then running workshops is the best way to begin. At least, it was for me way back when.

When I got up on that podium all those years ago, I felt as if I was lost at sea. But there was a moment during that talk, even as I stammered and stalled, when I caught flickering glimpses of land amid the undulating waves.

I’m so glad I decided to swim.

I recently sent out a survey to our practitioners, asking who has delivered training in a workshop setting before. Of those surveyed, 1190 have done so and 586 have not. That’s an impressive number – we have a lot of brave practitioners in our community! Please share your tips, experiences and questions in the comments section so we can share our skills with each other and harness the exciting potential of workshop hosting.

Our original workshop (a tad more polished!) is available as part of our online course Uncommon Hypnotherapy.