Get my free therapy techniques in your email inbox every week - click here.

Why write an ‘Alternative DSM’?

Psychiatry has lost its way.

It really doesn’t seem to be working. All across the western world emotional problems are on the increase. (1) Although increasingly more medication is being prescribed, rates of depression and other anxiety related conditions are steadily climbing. If the meds work, why are so many people still suffering?

One contributory factor is that psychiatry treats emotional problems as if they were physical problems. This approach fails to take proper account of the social context of the individual, their relationships, how they are living and how society might actually be making it harder for them to meet their emotional needs.

There is also, we suspect, a mental health cost to the side effects of the medications intended to ease emotional suffering. In England alone, doctors dish out 31 million prescriptions every year for antidepressants, despite the complete absence of hard scientific evidence that they work any better than placebos. (2)

Who decides what aspects of unhappiness should be medicated?

The reference book psychiatrists rely on to diagnose mental ill health is the Diagnostic and Statistical Manual of Mental Disorders (or DSM) published by the American Psychiatric Association.

It is an amazingly powerful book. It can be and is used by psychiatrists to completely alter how an individual sees themselves and is seen by others. Labels, especially psychiatric labels, are often highly predictive of how we feel and behave and how others will treat us. The DSM is also used to inform the prescription of brain-altering drugs which many people may then find themselves taking for the rest of their lives.

This book of human ills defines an ever growing catalogue of emotional problems as ‘psychiatric disorders’. This is itself problematic because:

We believe that while psychiatric diagnosis may be genuinely useful and helpful in some cases, it is seriously out of control.

Most psychiatrists don’t do psychotherapy.

Psychiatrists are not bad people, nor dishonest, but there is a serious conflict of interest in play when diagnosis is made according to guidelines based almost entirely on a medical model of human difficulties (thus calling for drug treatment) and put together by contributors who may have financial links with drug companies.

Difficulties that used to be seen as part of the human condition and individual difference have been reduced to ‘chemical disorders’. Homosexuality is no longer included as a suitable case for treatment in the DSM, thankfully, but ‘hypoactive sexual desire disorder’ (low sex drive) is. Lack of sexual interest may result from relationship difficulties, high background life stress levels or past sexual trauma, among other things. Just because there may be a genetic predisposition to develop some types of psychological problem doesn’t mean that every expression of human suffering or emotional or behaviour difference should be tagged as ‘psychiatric’ and so treatable with medication.

We have a different take.

Keeping the basics in view

At Uncommon Knowledge, we hold the view that the range of human psychological problems is actually quite limited, and that many seemingly different problems share common elements.

This is in direct contrast to the path psychiatry has taken over the last few decades, with more and more ‘official’ classifications being regularly added to the DSM. While it may appear cynical to link this with the tendency to treat every problem with a pill, we think it is important to bear in mind that it may well have been more influenced by profit incentives than by the real needs of suffering human beings.

The Sensible Psychology Dictionary was created with the intention of handing back control of our psychology to the people who use it (!) so that people can throw away the labels they have been assigned and start seeing themselves as normal human beings again, with perhaps the occasional passing problem.

Even where the problem is more lasting and severe, we want people at least to be able to see it in the context of their humanity, rather than as an unshakeable – and unquestionable – dictum ‘from above’ that fully and completely sums them up.

Psychological knowledge used to be the domain of the wise men and women among us, and community and rituals developed to help people deal with their troubles and difficulties. This knowledge belongs to all of us.

Alternative diagnosis for the rest of us

The medical metaphor for human suffering has been taken too literally for too long. The greatest beneficiaries have been the drug companies.

A great deal of human suffering can be perfectly well explained in common sense language free of intimidating ‘expert-speak’.

With this in mind, we have begun to devise our own versions of the more common diagnostic terms from the current DSM that people may find themselves labelled with. Sometimes we may seem a little irreverent – even playful – in our descriptions. In no way do we intend to belittle the impact of emotional difficulties on those suffering them. Our intention is to take human experience back into the realm of common sense by using everyday language that everyone can understand.

We hope you find our definitions useful and their accompanying articles instructive and, above all, empowering.

The Sensible Psychology Dictionary definitions are listed below. Please let me know what you think of them in the comments section of each article.

Get my book FREE! 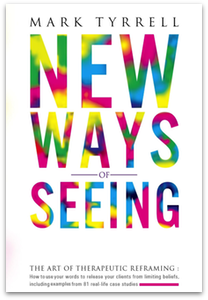 Psychology is my passion. I've been a psychotherapist trainer since 1995, specializing in brief, solution focused approaches. I now teach practitioners all over the world via our online courses. Read more about Uncommon Knowledge

Send this to a friend