Go beyond matching, mirroring, and leading for quick rapport building 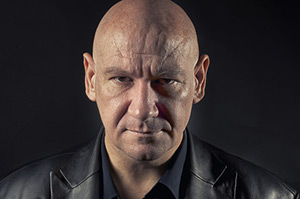 I glanced down. The word ‘HATE’ was boldly tattooed across the knuckles of both of his hands. My new client was staring (or glaring!) at me with a suspicious look in his eye.

It was not the most confidence-inspiring start to a session.

When I was getting started as a hypnotherapist, the field was awash with new age mumbo jumbo. Most inductions centred around whale song, flowery gardens, inner wisdom, and the like.

So of course one of my early clients would turn out to be a former member of an elite commando unit. As soon as I walked into his home, I could see he just exuded testosterone. I had a feeling this very overtly macho guy would be pretty suspicious of any man he deemed less masculine than himself.

He’d called me for help with pain management, as he’d been left disabled by a severe rugby accident and wanted to take an Open University degree. But if I was to have any hope of facilitating a successful hypnotic trance, I knew I’d need to ditch the wise flowery whales, ‘get on his side’, and work from his perspective as quickly as possible.

Building rapport is much more than ‘mirroring, matching, and leading’

Quickly building rapport with your client makes a huge difference in how effective your therapy with them is going to be.

If you’ve done any training in therapy or sales, you’ve probably heard about mirroring, matching, and leading. And for good reason. These elements are the basic – and highly effective – building blocks of good rapport.

The general idea is that when you want to build rapport with someone, you either:

Rapport builds as your client unconsciously notices these similarities and starts to feel, on some level, that you are like them, that the two of you are in tune.

Bit by bit, you can then start to lead them towards a particular line of thought or a more relaxed behaviour. If sufficient rapport has developed, the client will, without realizing it, mirror and match you – incorporating your ideas, leaning back in their chair a moment after you’ve leaned back in yours, echoing your enthusiasm for the new skill you’re teaching, or whatever.

But this all takes time – time that you might not have, especially if your client is reluctant to engage in therapy at all or having trouble focusing on the session due to pain or racing, stress-filled thoughts. The faster you can make them feel not just listened to, but understood by you, the sooner they’ll begin to connect with and incorporate your therapeutic interventions.

So, how do you do that? How can you instantly connect with the client in front of you, build rapport, and make them feel you ‘get where they’re coming from’?

Marching into trance: The power of utilization

Whenever you want to connect with somebody, you can use the principle of utilization to instantly build rapport. The simplest approach is to talk about the interests and experiences of the person you are talking with, even if you don’t share them.

Whenever you want to connect with somebody, you can use the principle of utilization to instantly build rapport.Click To Tweet

So how did I build rapport with the macho former commando?

Well I knew that, having served a long time in the military, this fellow knew how to go into trance. Although I doubted he would have recognized the narrow focus of attention essential to military training and practise as hypnosis!

I quickly set out to utilize his understandings and experience. In very down-to-earth, straightforward words, I explained the nature of hypnotic trance – the narrowed focus of attention, the fast passing of time, and so forth. He connected to it immediately.

“I know what you mean!” he said. “When we used to march twenty miles with packs on our backs, I wouldn’t even notice the discomfort or the time passing, I was totally in the zone!”

Now all I had to do was re-evoke a military exercise for him. In no time at all, he was there in his mind. Then it was easy to lead him step-by-step from that very alert, focussed state of mind, with which he was already deeply familiar, to a deeply relaxed state in which his mind could achieve the receptivity needed to integrate new ideas, perspectives, and abilities for pain control.

At the end of the session, he said that he felt I was the only professional who had ever really understood him.

Utilizing the interests of the person you are talking with is an easy and very powerful way of getting them interested in the conversation you are having with them. Once they are fascinated, you may gradually be able to introduce topics that you find more interesting. Great communicators – which, by the way, includes people who are great at flirting! – do this quite instinctively.

Even stand-up comedians employ utilization all the time. What really seems to make people laugh are either things they recognize as true but perhaps never really put into words before, or everyday things exaggerated to an absurd degree. In both cases, the comedian utilizes what the audience already understands.

So, although the examples I give here of course come from the field of therapy and hypnosis, the utilization principle is vital for all teaching and all communication. But sometimes too much professional training can knock it out of people.

Occasionally, just from listening to someone I’m meeting for the first time, I can tell not only that they’ve had therapy, but the particular ‘ideology’ in which their therapist was trained. Some people talk as if they have swallowed a self-help book! Every other word is psych-jargon, clearly picked up from the particular therapeutic school followed by their therapist.

The utilization principle does away with all this.

The late, great Milton Erickson, perhaps the greatest clinical hypnotherapist of all time, emphasized the vital need to enter the client’s world and not inflict psycho-babble on them. In order to influence and heal them, you need to learn – and utilize – their language, their perspectives, and their understanding, rather than drag them into your way of thinking or seeing.

Building rapport from the inside out

The worst kind of hypnotherapist just uses ready-made scripts. There’s no regard for the uniqueness of the client in front of them. Understanding and practicing utilization, on the other hand, is respectful. And all scripts and limiting ideological pigeonholes can be discarded because there is simply no need to overwhelm the client with jargon or force our own interests on them.

Rather than trying to change people from the outside, the good therapist uses whatever the client in front of them already has inside. The utilization principle appeals to an individual’s unique personality traits and interests to bring about change. This is a natural progression for the person and, at the same time, facilitates deeper rapport with them.

For example, a smoker who is prone to angry outbursts could be led to direct their anger towards the cigarettes. This neither denies nor dismisses the reality of the anger, but utilizes it in a constructive way until the person can learn to manage their anger appropriately.

In such a case, it could also be argued that anger directed towards something so potentially lethal is perfectly appropriate!

To a computer programmer with a phobia, I might talk about the need for some new software to replace the old.

To someone who loved the novel Wuthering Heights, I might refer to the exhilaration and relaxation that comes from a walk on the wild and beautiful moors.

To someone who was into hang gliding, I might speak about rising above and beyond anxiety until it was barely visible.

How can you be limited in your approach when there is such a variety of human beings?

Milton Erickson even demonstrated that we can use the client’s ‘problem’ as a way of helping someone progress in life.

Erickson once treated a suicidal girl who was convinced she was hopelessly unattractive and would never find a partner because she had a gap between her two front teeth. Instead of trying to argue she really was attractive, telling her to ignore the worries, or working to find the ‘root cause’ of her problems, Erickson utilized the very thing she worried about to change her thinking.

At Erickson’s suggestion, the girl squirted water through the ‘ugly’ gap in her teeth at a young man she often encountered at the water fountain during her office break. Perceiving this behavior as flirtatious, the young man asked her out on a date!

So, this woman who had thought herself unattractive partly because of the gap in her teeth now found that this ‘flaw’ had become the catalyst for contact with the opposite sex. By utilizing what had been seen (by her) as a huge problem, Erickson reframed her perception of herself and the possibilities open to her.

This is an almost Zen-like use of utilization. No rapport breaking, no argument, no therapy speak, no assumptions about problems running deeper. Just direct utilization.

The end result? A much happier young woman who had learnt to love the part of herself she once hated.