How to Avoid Making Your Client Resistant

When to tread lightly with solution-focused therapy 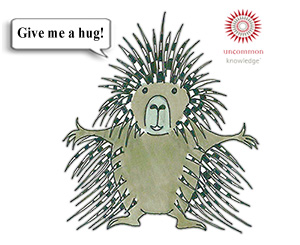 Despite needing help, your client can become spiky if you are too positive too soon

“Dreams, puns, elisions, plays on words and similar tricks that we ordinarily think of as frivolous, all play a surprising and somewhat disconcerting role in the communication of important and serious feelings.”

A flicker of doubt? Maybe a little resistance to change?

In my first session with Sharon, I can see that too much positivity on my part might be a problem for her.

Sharon has been suffering sickening panic attacks – up to ten a day – for twenty years, and it has crippled her life.

And as I’m working with her, there’s a telling moment.

As I start to talk to her about getting over the panic, I see a micro expression of doubt flit across her face. It’s only for a moment, but there’s no question it’s there. (You can see my session with her in Uncommon Practitioners TV.)

So I have to tread carefully. I believe that we should respect people’s beliefs, even – maybe especially – their negative, self-limiting ones. I sense I am being a little too positive early on with Sharon. And that poses a problem.

How do I get the message across that things will change without setting off Sharon’s automatic defences? After all, she has been suffering these panic attacks for twenty years. Who am I to tell her they can stop just like that? It’s not going to sit well with her experience, that much I know for sure.

It’s important to be solution-focused with our clients. They need and deserve that from us. While understanding the past may have some value, the main thing clients want is to be happier in the future. But we know that forcing ‘positive thinking ‘upon resistant clients who don’t feel positive can clash with a negatively biased person’s beliefs – sometimes to the point of being disrespectful to their reality.

While understanding the past may have some value, the main thing clients want is to be happier in the futureClick To Tweet

Let me share with you three of the ways I used indirect but powerful communication with Sharon. Ways you can use with any client.

Tip 1: Say it in a way that skips the tripwire

Anecdote, analogy and metaphor are all ways we can say something to a client without seeming to give advice or appearing too ‘antagonistically positive’.

Sharon tells me (about 15 minutes into the video) that deep down she believes she doesn’t really care what people think of her. Yet, at the same time, she fears she’ll look ‘silly’ or ‘weird’ to other people. She doesn’t panic at home or when she’s really busy. It seems to me that fear of what others will think is, at least partly, fuelling the panic.

I want to say: “People don’t notice as much as you fear they do!” But instead, I say something else.

I tell her a story about another client who had a fear of ‘making a fool of herself’ in public. I gave that client an ‘ordeal task‘ – a task which is hard to do but the benefit of doing it is contained within it’s hardness to do. That client carried out my ordeal task, which evaporated her fears about what she had believed others must think of her.

Clearly, the purpose of me relating this to Sharon is to impart the message to Sharon herself that people notice much less than we might imagine. So why didn’t I just say that?

Implication is stronger because it’s harder to automatically reject

If an attempted reframe – a new or wider way of seeing a problem – is delivered too directly, it can instigate within the client the infamous ‘ elastic band effect‘. I know Sharon believes in me, because I helped her stop smoking 16 years before, but still I can sense some uncertainty.

I sense that she feels it’s unrealistic to expect to overcome ten panic attacks a day – a problem that has plagued her for much of her adult life – in a single session. So I tailor my intervention accordingly. I frame it in an indirect way (as the subtitles in the video explain). To say “Ah, people don’t really notice you know!” would have been disrespectful, and would have conveyed the message that I really didn’t understand.

But by talking about what someone else, who had similar levels of panic to Sharon, had experienced, I’m presenting the reality that ‘people don’t notice that much’ in a way that maintains rapport. And there’s something of wider importance here.

People communicate unconsciously all the time in everyday life. They imply things; they emphasize certain words that are, perhaps subconsciously, important to them; they use metaphor, the language of pattern recognition, rather than linear processing in the human mind. People are geared to recognize these unconscious methods of communication.

So using ‘pattern recognition’ language with clients can be immensely powerful – and not just when they are in trance.

Deep in trance (49.34 minutes into the video session), I say to Sharon:

By saying “first”, I imply that a full week free of panic won’t be a one off, but rather a beginning. And indeed, months later Sharon would write to me telling me she hadn’t had even one panic attack since the session.

Rather than talking about indefinite freedom from panic, I simply describe the first full week to get the ball rolling. But we can presuppose in other ways. So rather than saying to a client, “You will feel better about yourself!” – a statement that is easy to automatically reject – I might say:

“In the coming weeks, as you continue to feel better about yourself, I’d like you to notice the kinds of things you start doing that maybe you wouldn’t have even thought of doing before…”

‘As’, ‘when’ and ‘notice’ are often used in a presupposition. They imply this is definitely going to happen but don’t really conflict with any client negative bias because the main focus is on what the client can notice, not whether or not they will improve.

A magician might call this ‘misdirection’. You direct the client’s focus on one thing while slipping in the positive suggestion. The conscious mind feels it has nothing to reject, even as the subconscious mind absorbs the suggestion.

But there is something even more subtle here that I think many therapists miss.

Imply a negative, but attach it to something that doesn’t matter

By adding the word ‘maybe’ in the above example, I allow for any customary doubt the client might have around positives, but attach that ‘doubt word’ to something that isn’t really to do with their improvement. The ‘maybe’ stops the message from seeming too jarringly positive and matches any internal doubt the client has. For example:

“As you begin to leave the depression behind, I think the first thing you’ll probably notice is having more energy in the mornings.”

Notice here I include ‘probably’ to appeal to any part of the person that is, quite naturally, doubtful, but link the doubt to whichever positive thing they’ll notice first. The need for doubt is maintained, but it’s no longer connected to getting better.

“I don’t know” is a negative statement and can connect with someone who is used to thinking negatively. But I can attach it to something more positive:

“I don’t know… just how soon you’ll… begin to relax so deeply.”

In this way we can match our language to any negatively weighted language of the client, thus maintaining rapport, but keep it clear and cleanly separate from the real outcomes we and they are after. That is a little understood technique.

Now, the next tip can be used both in and out of client trance.

Tip 3: Communicate within your communications

I tell Sharon to “relax into sleep” (just over 40 minutes into the video), but it’s only a direct suggestion in the way it’s emphasized and delivered. So I’m talking about times when she’s been very, very sleepy – not telling her to feel sleepy. I then say something like:

Notice here that both “you feel sleepy” and “relax into sleep” have pauses around them, and are spoken with slightly deeper tonality.

So rather than just saying “relax into sleep” – which is a conscious command and may have her thinking “I don’t know how” – I’m talking about those general times in life when she’s about to relax into sleep. I’ve embedded the suggestion into a wider permissive context where I’m just talking generally.

With my conversational induction, it’s not long before Sharon goes into hypnosis.

Most hypnotherapists are taught the art of the embedded suggestion, but many still don’t use conversational hypnotic language or use suggestion during, say, the information gathering part of the session. Here are three more examples of how we can embed suggestions:

“Many people… begin to feel really relaxed … now that the weather is getting warmer…” (A direct suggestion embedded in such a way that the conscious mind won’t pick up the suggestion, but the unconscious mind can start to respond to it.)

Now, I’m not saying that one embedded suggestion will have a magical curative effect. But sprinkling embedded suggestions to relax in lots of different ways can begin to have an effect without once directly suggesting that a person relax. In fact, many people have the limiting belief that they ‘can’t relax’ or ‘never relax’, meaning that a direct suggestion may have no effect at all.

My session with Sharon clearly shows the power of methods that use implication. Presupposition, embedded suggestions, analogy, and metaphor can be extremely effective, both in and out of trance.

We owe it to our clients to help them find solutions, but relentless positivity can move them further away rather than closer to resolving their problem. These have been some ideas about how to convey optimism without breaking rapport. What other techniques or approaches do you use? Let me know in comments.

Watch Sharon’s full therapy session, as well as many others, inside Uncommon Practitioners TV. And we’ve also made our Uncommon Psychotherapy course, which gives you a fundamental understanding of what clients need, available inside UPTV for no extra cost.

The Slave Driver Inside – Treating OCD

Three Natural Ways to Use ‘Deepeners’ in Hypnosis

The Power of Questions

How to Use Problem-Solving Therapy with Your Clients