The 7 Worst Business Mistakes I Made as a New Therapist

What you can learn from the (retrospectively) silly things I did 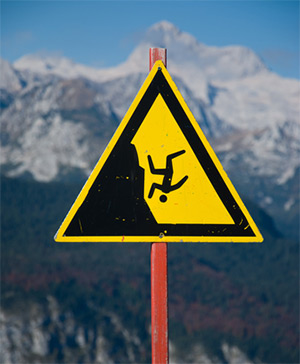 I made so many mistakes early in my career but I'm pleased to say I learnt from all of them!

As a newly qualified therapist, my future seemed bright.

I floated out from the final exam, sensing I’d done well and knowing I’d found my calling. Dizzy with excitement, I couldn’t wait to save the world. Or at least some emotionally troubled people in my little corner of it.

Little did I know idealism and financial reality were about to painfully collide. You see, I was no entrepreneur, no marketer, no Richard Branson.

I was, well, a therapist. It felt almost…distasteful to think about self-promotion.

And there’d been very little on the course about how to actually make money at therapy. Why should I think it deserved my attention?

So, where did that put me?

A couple of months into my idyllic new life, the flood of clients hadn’t materialized. I was starting to feel disillusioned, getting a little disheartened, and was most definitely broke.

But I had to make it work. I was sick of being a wage slave. Before my (attempted) career path change, I’d been working minimum wage jobs, often several at a time. I was determined not to go back there.

Despite my newly-qualified-therapist optimism, it took me a year to go from zero client income (although I still worked other jobs) to £400-500 a month, if I was lucky.

The wolf was kept from the door, though it howled constantly from just round the corner.

But I kept at it, slowly learning how to make money through my life’s calling.

Today, I can look back and see exactly why it took me so long to be earning a decent living through therapy.

And by giving you the seven worst mistakes I made, I hope you can speed up the process!

1. Expecting clients to beat a path to my door

Although it sounds ridiculous when you say it out loud, I’d subconsciously assumed clients would just sense my newly earned certificate and somehow be drawn to my therapy room.

Unthinkingly, I’d felt that once I was a therapist my newly gained skills would be enough to provide a good income.

And guess what? It didn’t happen.

It took me a while to wrestle down my own magical thinking, overcome my passive sitting around, and go get some clients.

Obvious-in-retrospect learning point: You can’t be a therapist if no one knows you are one!

But even after clients did begin to trickle in, I found my attitude still got in the way. If I were starting out now, I wouldn’t be…

2. Settling for fantasy over action

When I first started, I would self-indulgently imagine how successful I would be, how my diary would fill to the brim with eager clients. Life would be wonderful, sunshiny, and eternally rewarding. I could see it all so clearly… in my head.

Sure, we all need some dream destinations to help motivate us, but too much self-indulgent fantasy can start to replace action (1).

As it is, reality has now far out-performed my old fantasies! But back then, I had no way of knowing that. Paradoxically, it was only when I stopped fantasizing that reality had a chance to outperform fantasy.

Also, if I had my time again, I wouldn’t be…

3. Feeling pathetically grateful to be paid

Again, this sounds ridiculous, but in a way I couldn’t believe people would actually pay me for therapy. I’d feel hesitant to ask for my fee.

It took me some time to see that you have to charge enough for people to trust you. Under-charging can actually break rapport: “What’s wrong with this guy and his therapy? Why is it so cheap?”

Obvious-in-retrospect learning point: We value what we pay for, so under-charging can damage the motivation of a client.

The less they’ve invested in therapy financially, the less they might invest in it emotionally. Not good when, after all, your therapy may indirectly or directly save lives.

4. Not pursuing ideas which made money

Early on, I ran a workshop on hypnosis for the general public. It worked, they loved it, and, for the first time, I made what seemed to me a lot of money – and quickly. Wow!

Early on, I sold some hypnosis cassettes through a magazine.

Early on, I advertised a one-day phobia seminar and it was jam-packed.

Did I pursue these things? Not really.

I could have trebled my income pretty fast around that time. Instead, I prevaricated or felt like it had been a one-off fluke.

Obvious-in-retrospect learning point: If something works, do more of it!

If the earth gives, then that’s the spot to dig. If something works, go full out. But on the other hand…

5. Not saying no to save time and money

Just as I didn’t properly say yes to opportunities, I also didn’t say no to dead ends. So, I lost time and money.

One workshop I ran only had four takers (because I hadn’t given enough lead time after putting leaflets in cafés). Did I postpone it until I had enough people? Nope, I ran it at a loss.

I would travel miles to see a client and not charge them for my travel or the time.

It’s understandable that we want to say yes to every chance for work early on. But learning to say no to dead ends frees us to say yes to real opportunities.

Obvious-in-retrospect learning point: See your time as something valuable, because it really is the most valuable thing you have.

See your time as something valuable, because it really is the most valuable thing you have.Click To Tweet

I would be very careful how I gave my time now.

So, what about money?

6. Not using money to make money

Back then, if I made £500 in a weekend from a workshop, I felt it was ‘my money’ to be spent on non-business necessities.

Understandable, I guess, because I was broke. But my progress would have been much quicker if I’d used that money to print more leaflets or branch out into other towns.

You see, it took me a long time to start seeing my business as something separate from me – a living entity in itself that I had to service, nurture, and grow.

Eventually, my business partner Roger and I saved £8,000 from our workshops. But it still felt weird thinking of it as the business’s money rather than ours.

Obvious-in-retrospect learning point: Don’t think of money you make as ‘your money’ – or, at least, not all of it.

Now we have a seven-figure business, all from that initial £8,000, and we never borrowed money. But I had to make the mind shift from ‘my money’ to ‘business money’.

This last one is perhaps the most important of all.

7. Trying to do it all myself

Any real success is shared success.

But I was never going to be the world’s most technical guy or have the best business brain.

Obvious-in-retrospect learning point: Surround yourself with people who are better than you at the stuff that will take your business forward and do that soon.

I thought I was ‘saving money’ by not getting other people on board. Now, we have a team of people who are much better than I will ever be at a whole raft of things that help our business.

These days, with websites like Elance that can provide workers from anywhere for all budgets, there’s even less excuse not to provide rocket fuel for your business in the form of delegated talent.

If I were starting out now, I would really go for it and not dawdle as I did on the edges of professional fulfilment and success.

Of course, the past is gone. But I hope some of these tips will help you reach your goals a lot faster than I met mine. Good luck!

What Are Your Greatest Therapy Business and Marketing Challenges?

How Much Do Practitioners Charge?

How to Build a More Profitable Practice by Doing Less