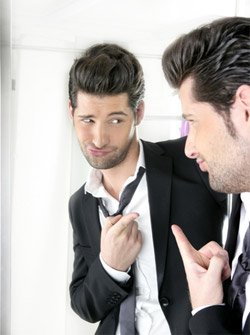 “Frigid, stupid, crazy – that’s me.” Adele reeled off her boyfriend Gary’s colourful diagnosis of her problem.

Of course, guess what, this boyfriend, the ‘real him’, was the very personification of charm. When it suited. Every rose has its thorns. Or, in this case, every thorn bush has a petal or two.

So I get down to some careful empathetic questions, and lo and behold:

Adele’s self esteem had been fine – before she met Gary.

Adele had been perfectly happy – before she met Gary.

Adele had never been called ‘frigid’, ‘stupid’ or ‘crazy’ – before she met Gary.

And why had she come to me for therapy?

The song of the narcissist: Do as I say!

Like all good manipulators, this perfect specimen had succeeded in convincing Adele that she was the problem. That she was lucky beyond belief to have bagged him, most wondrous of beings.

After two years with this guy, Adele really was afraid she’d lose him. What’s more, she fully believed he was right in claiming no one else would want her. He was doing her a favour by being with her – the saint!

Caught fast by her own tangled heartstrings, she’d swallowed his propaganda, whole.

But now he had sent her to see me to help her overcome this ‘inhibition’!

Clearly a control freak of an order to make Vlad the Impaler look like the too-nice-guy a wary woman would never date.

So what was it with this guy?

Loving the self lover

As Adele talked to me about her narcissist lover, a creeping unease filled me.

She told me, quite uncritically, how Gary liked to be the one doing the talking, how he ‘didn’t mind’ her seeing her friends, as long as he was there (nice of him).

“He doesn’t like other people talking,” she said, “and he doesn’t like it when I talk to anyone else. I guess he’s just very social, really, and loves to be the centre of attention.”

And then she proceeded to catalogue all the ‘rules’ Gary had written up for her to follow, and told me how in his parents’ eyes he could do no wrong. And how he would stand for no disagreement.

Cast in his own self-aggrandizing imaginative blockbuster movie, Gary was the star, the most handsome, caring, knowledgeable and – despite his regular cheating – loving man ever. Adele was no more than a bit player, in a mainly non-speaking role, cast to make him look even better. And to cater for his need for a non-stop supply of praise.

The more Adele talked, the clearer it became that this was no poor inadequate male overcompensating for his low self esteem we were dealing with here. This was a totally demanding diva who – in stark contradiction of reigning assumptions about this kind of behaviour – genuinely loved himself too much.

His appetite for esteem, attention and adulation barged and battered its way to the front of everything, screaming “Me! Me! And only me!” Nobody else counted.

Gary was plainly no baby at 37, but Adele related how his parents not only doted on him like some precious new-born but gave him so much money that he had no need to work. Their ‘baby’ was a cunning, self-obsessed bully.

“Calm down, Mark!” I told myself after listening to all this, taking a deep breath. “Give this guy a chance! Maybe you’re missing something here. You’ve only got her side of the story, but… but… she’s not really bad mouthing him… but it seems plain to see…”

Adele interrupted my thoughts. “I realize I’m making him sound horrible and this is meant to be about me, not him!”

Adele really needed help, that was clear. But it wasn’t for me to say “Ditch that narcissist and save yourself!” (much as I wanted to yell those very words).

As babies and toddlers the universe seems to revolve around us. That’s the natural way to start out in life. But it’s not meant to stay that way. When it does, for whatever reason, we can end up being pathologically selfish, spreading suffering all around as we pursue our own egotistical ends in complete disregard of the needs of others.

So sometimes we need to come to the aid of the innocent victims of this all-pervading egotism.

I wanted to gently manoeuvre Adele away from the self-damning sense that she was all wrongness to his glowing perfection, all to blame for his rages (or ‘tantrums’, as I called them), infidelities and put downs.

Here are 5 smart tips to help you help a client who may be stuck in the web of a sociopathic narcissist (or someone with ‘Narcissistic Personality Disorder’, depending on your favoured diagnostic language):

1) Tread carefully, for you tread on my dreams…

Have you ever noticed that when someone complains about another person, that is one thing, but if you start complaining about the very same person, they will leap to their defence?

This is a common pattern and we need to allow for it.

And let’s be fair. People can behave narcissistically sometimes without needing to be labelled a ‘narcissist’. Some people just need to grow up, after all. I don’t like to go around labelling someone as ‘this’ or ‘that’, because labels are so limiting. But it’s perfectly possible to talk about how people seem to be behaving without calling their whole identity into question.

Someone might be in love with poison, but it’s their poison, and you have to respect that. You might see clearly that someone is shackled to a two-timing, self-obsessed, manipulative, callous pariah, but we still need to be careful of the ‘rubber band effect’.

It’s a classic mistake to assume that all we need to do is point out a few things (although ‘pointing out a few things’ can be highly effective sometimes). But generally speaking, rather than charging in with:

“What an absolute narcissist nightmare!”

“So, when he behaves very selfishly like that, how do you respond to him?”

Here we are treating it as a given that he is self centred and cruel in his behaviour, but we are not giving them too much to fight against by saying: “He is clearly a … !”

2) Teach your client to externalize negatives

Narcissists, and bullies of any kind, are attracted to and often attract people who are conscientious, caring and sensitive – like Adele. People who tend to look to their own part when things go wrong, who see the best in others but are quick to blame themselves. These traits are favoured when the narcissists choose relationships.

Now conscientiousness, a willingness to take responsibility and see the best in others are all wonderful traits – if they are counterbalanced with a self-respecting sense of justice and fairness. Without this corrective filter, they can make people prone to low self esteem, depression, guilt and shame.

It’s great to take responsibility – if you are responsible. Otherwise don’t.Tweet


Internalising all the difficulties in a relationship (“I just need to try harder and it will work”, “It’s all my fault…”, and so on) means that the other person is free to externalize blame for anything that goes wrong. Which is exactly what narcissists tend to do about everything – nothing is ever their fault.

Conversely, the narcissist will internalize credit. So if stuff goes right, the glory is all theirs and you had no part in it.

Simple as this sounds, it was a revelation to her. It helped her to not automatically blame herself in other parts of her life and see things more fairly.

Adele’s partner had battered her brain with suggestions of her stupidity, her sexual ineptness and her physical unattractiveness, but sometimes he could be the sweetest, greatest, most loving and charming guy in the world. When it suited him to be so.

We value what we don’t always or easily get.

And that psychological principle can trigger an unhealthy addictive element to some relationships .

When people are mean, selfish and unkind most of the time, then it’s easy to fall into the trap of feeling rather desperately grateful for the rare moments when they do behave decently. In fact, we come to value the good bits more because they are so rare.

This is simple supply and demand. The less available something is, the more value it seems to have. So when someone is always predictably decent and nice, we can take it for granted, but if they run hot and cold we can come to be pathetically thankful for the times they are good to us.

If diamonds grew on trees they would hardly be as highly valued as they are.

Adele had never thought about her relationship in terms of supply and demand before, and it was a wake up call.

“I am always considerate of him,” she said, “but you’re right. He’s only considerate when it suits him – and then I’m ridiculously grateful!”

4) Remind them of their worth

This creature had sucked all the confidence from Adele. Some relationships can brainwash as effectively as any pernicious cult, and Adele’s very own Charles Manson of the psyche had done an excellent job of denting her self esteem.

He criticised her job, her family, her friends and her (real) abilities. So I got her to talk with me about what life had been like before she got entangled with the ghastly Gary (I was careful not to use that word to her). This reminded her of her own strengths and interests (and that they were valid interests). I asked her about what she liked to do and what she wanted out of life.

It was as though being with this man for two years had somehow blotted out her own sense of being a separate individual. As we talked, she began to get a new sense of who she was She felt good when we talked about the ‘real her’.

It was clear to me that although she had been trying to hide it from herself, Adele did know what Gary was really like, not that deep down, just below the shiny attractive surface. She knew that in reality he was vampiric, self-obsessed, unloving and cruel.

But I did not press her to say that in so many words.

Instead, I asked her how things might be in a year, three years, ten years, if they continued as a couple.

A shadow passed over her face. I asked her to imagine being with him once the charm had finally worn off in the grind of daily life and familiarity.

“Think about that future,” I said. “What do you think would happen to you then? You don’t have to say anything, just think about that.”

She sat lost in thought for several minutes, her eyes cast down.

I want to make it clear that I did not once suggest that she get rid of Gary.

I did not tell her that I thought she’d wandered into a dark relationship cul-de-sac which would steal years of good living from her.

All I did was ask questions, to get her to think things over calmly.

As it turned out, in the end she did get rid of him, the man who had once said to her, “No one rejects me! No one!”