Timeless principles for working with kids 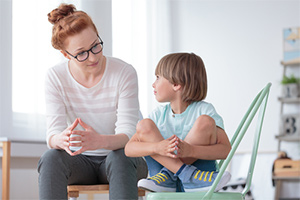 When working with children, as with all clients, we need to use the language, idioms, and understandings they use and have.

“There can be no keener revelation of a society’s soul than the way in which it treats its children.”

“I’m seven!” Paul proudly proclaimed. “And soon I’ll be eight,” he added with an enthusiasm for growing older that eludes many adults.

Yet Paul was troubled. Since his father had left the family home six months earlier, he had started to struggle with sleep and school.

It seems that more children are unhappy than ever before.1 And this rise of unhappiness and mental health problems in children is, to me at least, especially heartbreaking.

Paul hadn’t seen his father at all since he left. To make matters worse, Paul’s father wasn’t paying child support, which put Paul and his mother in a difficult position financially. Sadly for Paul, the experience of poverty during childhood has been shown to impact mental and physical health well into adulthood.2

Paul’s mother Sheila was also under a lot of stress, and seemed to feel that it was all her fault that her only child was suffering. “If I’m stressed then he’s stressed,” she told me shamefacedly. Sheila explained that Paul was having behavioural problems at school, sleeping poorly, and getting tearful over “stuff that never used to bother him.”

I worked with both Paul and his mum to help him recover his open, spontaneous, adventurous, happy self. The boy on the inside.

This was a specific case, of course, but here I want to offer some general considerations for working with children.

Guideline one: Whose problem is it?

Many adult clients bring themselves in for help. They’re often highly motivated to change. Yet child clients are brought in by their parents or caregivers.

Sometimes to do this we may need to see them for a little while without their caregiver present. I once worked with a little boy who said he had a problem at school when I asked him in front of his mother, but retracted the statement when she wasn’t present! We need to get to the heart of the child’s perception of their situation, not simply the parents’ – although both are important, of course.

When Sheila brought Paul to see me, I wanted to make sure Paul felt that I was speaking to him, rather than his mother and I talking about and across him. So I said:

“Paul, your mum says you are not too happy sometimes. Do you think that’s right?” He did. But I needed to give him the chance to tell me if he didn’t. We need to get it from them. Which brings us neatly to the second guideline.

Guideline two: The child is not the problem.

I’ve had parents drop their children off at my clinic and more or less tell me to sort their child out for them, as though the child was the problem rather than the one suffering.

But as with all clients, we need to help separate the emotional difficulty from the child’s actual identity. We can do this verbally and even playfully.

One seven-year-old girl whose desperate parents dragged her to see me had terrible tantrums. The whole family was being ruled by the capricious whim of her temperament. But she was starting to suffer consequences herself. She was losing friends at school and party invitations were evaporating fast.

“I cause problems,” she told me glumly. I began immediately to work on externalizing the pattern. I wanted to get her to view it as the problem, rather than herself.

“What could you say to that temper tantrum next time it tries to make you shout and scream and upset your friends?” I asked

Now I took it a step further. “If that temper tantrum looked like a person trying to push you around, what would it look like?”

“A naughty little boy!” She laughed as she described the appearance of the temper tantrum.

Now I suggested she could shrink that naughty little boy right down. I had her imagine the anger coming on but her “standing up to it” and telling it to go away.

She grew happier, her parents grew happier, and I felt she had acquired a valuable life skill – the ability to not be ruled by her own emotionality – at a young age.

Separating the problem from the child also helps develop their observing self, the part that can detach from emotional patterns and therefore exert more control.

Children naturally inhabit the world of imagination and play acting. This way of removing the problem from the child’s core identity seems natural and even fun for the child, and allows us to preserve or even enhance their self-esteem. After all, there’s little worse than feeling that your very identity and existence constitutes a problem.

But we need to talk to our child clients in the right ways.

Guideline three: Talk with them, not down to them.

As with all clients, we need to talk using the language, idioms, and understandings they use and have. We can build our therapeutic strategies around their interests.

A mother once brought her nine-year-old boy to see me because he still wet the bed. But there was a catch. I was to help him, but without asking or talking about bedwetting! “If you mention it he will just clam up!” she told me.

This boy loved cricket, and he especially loved playing cricket with his father, who lived in Ireland. The boy would regularly fly (escorted, of course!) to Ireland and back, which he loved almost as much as cricket. Cricket and aeroplanes. This was what he loved.

At some length I talked about how amazing it is that the tiny muscles in the hand just seem to know when to let go of the cricket ball. How they don’t let go too late or too soon but they just know when to let go all by themselves at the right time. I added that the body is amazing in how fast it can learn. Of course, I was really talking about bladders, not hands.

When we had finally exhausted almost all there was to say about cricket, I talked about flying. I told him a true story of when (pre-9/11!) I had been invited into the cockpit on a flight to America. To my amazement, the pilot and co-pilot were asleep! I was reassured that it was fine because the computer on the plane would take care of everything automatically until they woke up. Isn’t it amazing, I said, how everything can be taken care of when we’re asleep! The boy’s eyes were glassy and fixed.

After a single session, he stopped bedwetting. We hadn’t talked about bedwetting per se, but as I had talked about what he was interested in, a part of him, deeply subconscious, had known exactly what I was talking about.

So whether the child is interested in action heroes or computer games, whether they love Christmas or revel in talking about their friends, we should build rapport with them by talking about these things. We can use these elements of a child’s life to help them past emotional or physical difficulties.

But we can go further.

The great children’s author and illustrator Dr Seuss was the master of delivering profound truths to children in fun and playful ways.

Many children live through their imaginations and are more creative than adults. As in my example of the young bedwetter, we should be playful, metaphorical, and fun loving with children. We can connect to and remember what it’s like to be a child, rather than an adult who lives within rigid lines.

When you’re a child, it’s a big deal to be eight instead of seven. I used this very fact therapeutically with a boy who would cry when he didn’t win at something. I noticed he talked about the “big kids” with awe.

“And you’re seven. But nearly eight, right? And do the big kids cry when they don’t win?”

“Does that mean you’ll stop crying when you’re a big kid?”

And he did. Children are so direct and honest in their feelings that therapy can sometimes be astonishingly simple and straightforward.

The young girl who had temper tantrums painted such a funny picture of the naughty boy who was her temper that we both laughed. And she began to laugh about this more generally, often at times that would previously have triggered righteous rage.

Another little boy who had a vomit phobia would imagine being his favourite superhero whenever he had to deal with his sister being sick.

But we need to be mindful of something else.

Guideline five: No child lives in a vacuum.

What is the greater context of the child’s life? Paul’s mother was borderline depressed and really anxious. He missed his father. His best friend had recently moved away. Nobody, least of all our young, lives in a vacuum. We always need to look at the context of a person’s life.

Sometimes it’s the environment that’s sick, not the child. If we work with the parent(s) as part of the child’s therapy, we might devise ways to help the child socialize more, have more play opportunities, or develop skills to increase their sense of mastery and self-esteem.

Nobody, least of all our young, lives in a vacuum. Sometimes it's the environment that's sick, not the child.Click To Tweet

I told Paul therapeutic stories and helped him relax around bedtime and school time. We talked about his father and I helped him feel there was nothing wrong with him – that it wasn’t his fault his dad had gone.

Paul developed more friendships and his mother started to feel better too. I think he liked me because I treated him as someone whose imagination mattered. I took his ideas and childhood fantasies seriously and, I hope, let him know that his inner as well as outer life mattered. We had lots of fun and laughs, too.

As Paul left his final session with me, I remembered the wise words of Dr Seuss:

“A person’s a person, no matter how small.”