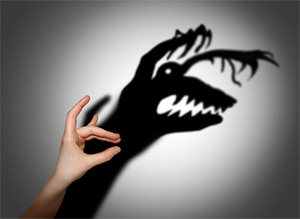 Chronic worrying has been called a 'thought disorder', but it's more a misuse of the imagination.

“Drag your thoughts away from your troubles… by the ears, by the heels, or any other way you can manage it!”
– Mark Twain

The word ‘worrying’ comes from an old English expression meaning to ‘strangle’.(1) If you’ve ever worried (and most of us will fall into chronic worrying to some extent at times), you know how appropriate that origin is.  When you can’t stop worrying, it really can feel hard to breathe!

Persistent worrying can turn into an uncomfortable habit that’s so hard to shake, chronic worriers even worry when they have nothing to worry about! Some feel that if they stop worrying, then they are ‘tempting fate’. One guy I worked with felt that it was his worrying (rather than, say, jet propulsion) that kept the plane in flight whenever he flew. “I feel like if I don’t worry, something bad will happen!”

Worrying is not harmless; it has consequences. The more we worry, the more stress hormone we produce and the more we dream at night. In turn, over-dreaming caused by unresolved worry can cause clinical depression(2) (something else to worry about!), so helping your clients stop worrying so much can have multiple benefits.

The role of the imagination

Chronic worrying has been called a ‘thought disorder’, but it’s more a misuse of the imagination. And imagination is not just ‘all in your head’. It has measurable, palpable effects, both physical and behavioural.

Another classic misuse of the imagination is chronic jealousy. Jealous people may imagine all sorts of negative things about their partner’s actions and intentions, often with no evidence to back their suspicions. This can significantly raise their blood pressure (evidence of the hypnotic power of the imagination to affect the body) and may even lead them to commit terrible crimes – all because they buy into the scenario created by their imagination.

Hypnotherapy, of course, works in the same way – but to positive ends. We use the imagination in hypnosis to alter physical phenomena (for example, remove warts, improve immune response, take away pain) and behavioural responses (for example, help someone stop smoking).

The common denominator is the imagination and whether a person uses it constructively or destructively.

So how do you get your clients to use their imaginations more productively and stop worrying?

1. Get distance from the worry

I’ll often talk about how we are capable of imagining absolutely anything, but whether we buy in to what we imagine is another matter altogether. Stephen King uses his imagination (as do many writers) to create terrifying scenarios, but he produces all these scary ideas without being scared witless by them himself. He can clearly separate himself from what he is imagining.

Simple as it sounds, this is often a completely new idea for many worriers. As I’m typing this, I can quite vividly imagine the ceiling caving in on top of me while not believing for one second that it’s going to happen (fingers crossed).

So rather than trying to get them ‘not to think about it’ – possibly the most useless advice ever – we can teach them to relax deeply while imagining what normally scares them. They can hypnotically ‘see’ their worries in the distance ‘over there’ while feeling ever so relaxed ‘over here’. I might even prescribe set doses of ‘worrying while relaxed’ for the chronic worrier to take between sessions. In effect, we are asking them to worry without feeling worried. I have found this to be surprisingly easy and effective.

Emotion is the neon sign yelling, “Pay attention to this!” When you diminish the emotion, the compulsive thoughts fade away and it becomes much easier for your client to stop worrying.

There’s nothing like a timetable for bringing things under control. Worry tends to be intrusive, gate-crashing your head when you’re trying to enjoy yourself or concentrate on something. Prescribing ‘worry time’ is a neat way of prescribing the symptom and organizing this destructive use of the imagination as a prelude to getting rid of it once and for all. (Of course, being able to worry sometimes is useful for all of us, so perhaps we won’t get rid of it completely – just keep it in its place.)

Asking the client to select a specific time of day to sit down and do nothing but worry for a set period – no longer than 20 minutes – gives them permission to ‘defer worrying’. When a troublesome thought occurs, they are to say to themselves, “Okay – there’s a worrying thought. I’ll worry about that in my ‘worry time’, not now.” This soon shows the client that worrying doesn’t have the hold over them that they thought. When they must do it for 20 minutes, it gets harder and harder to do – transforming itself from something that they can’t help doing to something that’s a real nuisance to keep up.

Worrying that doesn’t lead anywhere is like a dog chasing its tail and leads to over-dreaming.

It’s been shown that writing about emotional issues lowers stress hormone levels, perhaps because writing requires us to use other (less emotional) parts of the brain. But to be really effective, writing needs to be more than just venting. So get your worry clients to use this practical writing technique:

4. Throw your worries away

Writing down bad memories, sealing the paper in an envelope, and then throwing it away has been found to influence the memory. Recollection of the emotional details of an event actually becomes weaker after this metaphorical act.(3)

I once had a client who told me she was worried about certain things she felt she couldn’t talk to me about. I asked her whether she could write them down so we could “dispose of them properly”. She did so. I then asked her to take the sealed envelope and put it through my paper shredder. We then talked about those things she did feel able to discuss with me. In a later session, she confided that since doing our ‘ritual’, she somehow felt much less concerned about those secret worries.

Ultimately, worry should be a tool or a signal that lets us know when something might need addressing. We shouldn’t lose this tool completely, but no tool should ever be allowed to enslave its owner.