3 Weird Ways To Inspire Your Clients To Follow Their Dreams 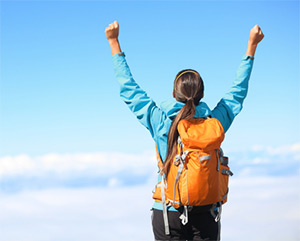 I could see Sarah's potential, like it was a flower that could really burst into bloom if given a little of the right nutriment

‘Let your dreams outgrow the shoes of your expectations.’
Ryunosuke Satoro

It was so sad. Sarah had zero expectations or aspirations for herself. She was like the eternal lonely child, always excluded from life’s fun. A living, breathing, put-upon Cinderella.

But as I talked to her I couldn’t help but see her prospects, long strangled as they had been by years of self esteem draining emotional neglect from her parents, in a rather different light.

She’d come to see me because she was having trouble sleeping and wanted help. But as she talked about her daily life it soon became clear that what was lacking was not so much sleep as friends, intimacy, a sense of community, and some respect from others – or for herself, even.

Sarah was without hope but you couldn’t truly call her ‘disappointed’ because disappointment implies that there had been hope. She had long since outlawed the ‘h’ word. She had no self pity either, as she had no hope things could be better.

Now, I’m not like one of those dentists who try to convince you that you need all your teeth out when you just need a clean.

I’m firmly against purposefully complicating treatment. You know the kind of thing – “Yes, we are going to need dozens of (expensive!) sessions to get to the real cause of your nail biting.”

Sarah had come in with insomnia, and insomnia was what I was going to help her with. But when you see such fertile possibility right in front of you, a flower of potential that could really burst into bloom if given a little of the right nutriment, it’s hard to ignore it. And sometimes you can help.

Here are three ways to help inspire someone to dare to dream, and to follow those dreams into reality.

“Tread carefully for you tread on my (lack) of dreams.”

It was hard for me to listen to this clever, attractive, decent and caring woman describe her future as a pre-destined unchangeable continuation of the same old same old nothingness. She wasn’t happy – but she’d come to expect nothing else.

However, the quickest way to break rapport with someone is to argue with them – however well intentioned you are.

The quickest way to break rapport with someone is to argue with them - however well intentioned you are.Click To Tweet

Low self esteem is a strong belief system. You can’t argue someone out of it.

Just try arguing someone out of their religious or political belief system and you’ll soon see how far you get. We have to respect the hold that people’s beliefs have on them.

But it is possible to gently begin to imply that you are a bit doubtful about their negative certainties.

So every time Sarah said things like: “People like me don’t have loving relationships!” or “I’m not the type of person who could ever…” I did not attempt to dismiss these beliefs as ‘wrong’, but I would:

And here’ an extra tip: Let their unconscious mind digest the subtle doubt.

If you quickly change the subject after casting subtle doubt, you don’t allow the conscious mind to get too involved. This allows the idea that they may be mistaken about themselves to ‘settle’ more into the unconscious mind and be properly digested, rather than ‘spat out’ and rejected by the analytical conscious mind.

You can become a little more direct once you have good rapport with your client – and you may be the first person who has ever really encouraged them (an experience much like rain after drought).

But tread gently even when you’re trying to help. And talking of ‘treading’…

2) Use the river, mountain or ocean of metaphor

We are ‘metaphorical creatures’ and we live, breathe and sleep in metaphor (to use three metaphors). Therefore metaphor should be used in therapy.

I taught Sarah a gentle relaxation technique through hypnosis. This was something she could take away with her to use to help her sleep better. During that hypnotic session, I told her a story about a tiny grub who believed it was destined to be a grub its whole life long. But it had occasional ‘weird’ intimations that something more was possible. One day, the grub meets a gleaming and beautiful butterfly who tells her that she too will one day become a butterfly… and… well, you get the picture (sorry, can’t stop these metaphors).

Of course, the grub had misrecognized its destiny and eventually does become a butterfly. I didn’t explain the story to Sarah but she seemed to absolutely relish listening to it.

But to get Sarah to actually do anything that might lead to a better future, something a little different was needed.

This really is a weird one. On the face of it.

I talked to Sarah about how everyone who lives, has lived, or will live has needs. And how to be true to herself she needed to not just eat, drink and sleep, but to meet emotional needs too.

Because I talked about this in such a general way (while including her in it), Sarah could accept the idea that we all have needs that should be met. Then I tested the water.

“Sarah, how would you feel about attending that party at the office?”

“Oh, I don’t think I could do that. I never really talk to anyone at work… I’d just make a fool of myself.”

“Okay… but we have a problem here…”

She was curious. “What problem?”

“The problem we have is that you think you’ll only make a fool of yourself, but we don’t know that this is the case. And a belief can never be a replacement for true knowledge based on experience, can it? So if we are ever to find out if it’s really true, you’ll need to go to the party, won’t you?”

What Sarah didn’t know was that I wanted her to fail at failing!

Failing your way to success

Because she saw herself in terms of ‘being a failure’, I could frame doing good things for herself as ‘demonstrating how she failed’ and ‘learning about her failure’ rather than ‘trying to be a success’.

In a later session, I suggested she start a night school class to upgrade her skills in computing. She believed she ‘didn’t have the brains’. I agreed that we didn’t know whether she had the brains.

“How long will it take to discover you can’t learn?” I asked.

She thought it would take one class. I suggested it might be more. She went to the class to prove she didn’t have the brains, and found she did have them.

By framing attempts at a better life as gaining ‘proof’ that she wasn’t meant to have a better life, she got a better life. Pretty soon she didn’t have to fail to fail but could just succeed.

Oh, and she started sleeping better too.

How To Turn Vague Therapy Goals Into Actionable Steps

5 Sensual Ways To Encourage Your Clients To Enjoy Healthy Pleasures

How to Help Your Clients Achieve Their Therapy Goals