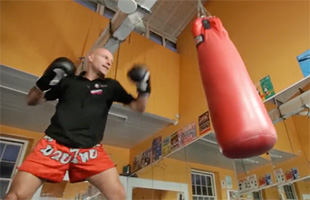 At the top levels of sports performance, mental fitness is just as important as physical

“It is when we act freely, for the sake of the action itself rather than for ulterior motives, that we learn to become more than what we were.”

—Mihaly Csikszentmihalyi, from ‘Flow: The Psychology of Optimal Experience’

Sean amazes me. He’s in his forties, but the other day I saw him running the Brighton marathon in heavy gloves, boxing all the way, jabbing, roundhousing and uppercutting for 26.2 punishing miles. No training necessary – the man is solid steel, inside and out. But he’s more than that.

Sometimes when life deals its cards, we wish we could ask for a redeal. At 19, Sean was told by doctors he’d never fight again. Of course, he didn’t listen, and went on to have a fine career. But he never quite reached the heights of performance he had envisaged as a kid.

There’s no doubt part of the reason was the tragedy he’d had to endure. When he was 30, his beloved sister Lianne passed away in a freak accident in the Himalayas, and he’d never really gotten past it.

In fact, when I saw him the other day he was running the marathon to raise money for a charity supporting poor children in India – a cause that had been close to Lianne’s heart.

She had always encouraged his sporting dreams, and in a way she still does – he regularly visits her grave to draw strength from the love he still feels from her: a love bounded by neither time nor space.

So why did Sean visit me for help a couple of years back?

What was stopping Sean winning?

Sean had won British kickboxing titles but never a European or World belt. He was the perpetual ‘also-ran’ – he’d fought major titles, sure, but never actually claimed one. Time was ticking, and Sean had unfinished business.

That’s when he came to me. Sean felt hypnosis could help him finally be the champion he had worked so many decades to become. As soon as I met him, I could see how badly he wanted to get in the ring, (you can see this yourself by watching my sessions with Sean inside Uncommon Practitioners TV).

He wanted to forget about all the setbacks, the decades, and the concept of winning or not winning. He wanted to become one with the moment, and do what he knew best. And he wanted me to help him do it.

When working with maximizing performance for a client in any field, I focus on three elements. These are vital:

1. Do they actually believe they can do this?

And then something strange happened.

The limit of the possible shifted, not in the bodies of contemporary runners, but in their minds. The year after Bannister’s historic run, 100 other athletes ran a sub-4-minute mile!

Nowadays, it’s become the norm for good athletes to do sub-4-minute miles. I’m guessing most of those 100 athletes could have run faster before 1954, but it took Dr Bannister to give them permission to do the ‘impossible’. The sporting world experienced a collective major cognitive reframe.

This sweeping away of limiting beliefs, known as the ‘Bannister Effect’, holds good not just for sports but for all areas of life. Beliefs shape (the perception of) what is possible.

So before working with a client it’s a really good idea to discern their beliefs around what might be possible for them. They might tell you they’re working towards a certain aim, but do they secretly, even unconsciously, feel it’s impossible?

As I write this, no one has ever run a marathon in less than 2 hours. I’ve heard it said it’s impossible. Is it?

Climbing Everest was thought to be impossible. So was mechanical flight. Perhaps part of Sean felt that in his forties it was ‘impossible’ to win a World Championship title. So what can we do once we spot a limiting belief in the impossible?

Recently I worked with a young high jumper. He’d developed the idea that he just couldn’t jump higher than 2 metres, a literal and figurative barrier he couldn’t even imagine surmounting.

I asked him whether he would be able to jump 2 metres in length. He laughed, and said that of course he could do that, with very little effort. Reframing height into length might not seem much like a solution but it started to shift his perception.

I then hypnotized him and encouraged him to think about the height of the bar in terms of length – suddenly 2 metres didn’t seem so much.

I had him hypnotically rehearse approaching the bar with the sense that it was measured in length rather than height, as strange as that sounds. He could see himself inwardly high jumping as he sat in my therapy chair.

During his very next competition he jumped 2 metres 5 centimetres. We had reframed his limiting belief by talking in terms of two metres not actually being that much distance if we thought about it as length. This may sound strange to the logical mind, but in hypnosis the laws of physics don’t apply!

One woman felt it was ‘impossible’ for her to play violin in front of a live audience. I suggested that during real performance the room and audience disappear in one sense just as, mysteriously, we “become one with them”. And the music flows through all of us together.

Framing the situation as being about a conduit for the music, not about her, was really powerful. We extended this idea in hypnotic trance so she could actually begin to experience it. She told me later that “it was as if I became the music, and so did the audience.”

We can help our clients experience the Bannister Effect either by pointing out that others have actually done the ‘impossible’, or by reframing the ‘impossible’ so it feels different to the person.

Converting height into length, or musical performance into a collective merging of experience are just two examples, but the possibilities are infinite. Reframing is much more than simply telling someone to look at it differently.

Certainly, Sean needed to think differently, but more importantly, he needed to feel different in the ring. He needed to alter his state of consciousness to let optimum performance in. But to do this he had to let go of any sense of ‘performance’ when he was actually in the ring.

So did Sean ever get his World Title?

He did. And when Sean became World Champion, do you know what he said? A few minutes into the second session he told me winning the title had felt familiar, as if he had “dreamt it before”.

Perhaps he had, in a way, lived it before. The recognition of a transcendent performance state is not new. Japanese martial arts recognizes a concept known as Mushin. Mushin describes a state in which one is completely free from thoughts of fear, anger or ego during combat, or, in fact, any situation in life. This state is similar to the concept of ‘flow’ or ‘being in the zone’.

But why would this lead to the feeling of familiarity Sean described?

In part it might be because he had hypnotically rehearsed it. But at a much more basic level, it’s because the state of optimal flow always feels like home to people. It’s how they feel they were meant to be when they compete, or make love, or connect with an audience, or whatever it might be. Often they will describe a sense of having ‘become one’ with the game, or the music, or the experience.

Just as in hypnosis, during these magical performance states, all thoughts of ‘performance’ vanish, and the analytical, controlling, narrow conscious mind fades to let in the immediate and vast reservoir of perception and perspective that is the unconscious mind. Paradoxically, this magical state of flow arises not by grasping for something new, but by letting go.

Find your flow by letting go

It’s strange, this paradox – that just as we let go of ideas of winning or losing, we become more likely to win or do well in an activity.

We perform at our best when all thoughts of performance and winning fade from the mind. The peak performance state of flow can be easily triggered by the use of hypnosis, though traditionally top performers, in whatever sphere of life, have waited for the state to come to them. When we help our clients reliably enter the flow state, we help them fulfil their performance potential. So what does it feel like to be in flow?

One of my tennis player clients put it nicely:

“Being in flow feels like stepping aside from the usual rigid boundaries of everyday life. I felt as though I could slow the ball down with my mind even when my opponent was, in reality, hitting it really fast. To me the ball was in slow motion and I had all the time in the world. I was completely absorbed in the current and immediate activity for its own sake. There was no thought of before or after, success or failure, ‘how am I doing’. You become what you are doing.”

In this state you can be doing amazing things with a tremendous sense of engagement and detachment, saying just the right things in just the right way in your presentation, or moving very fast but still feeling like you have “all the time in the world”.

Stillness in motion, infinity in a split second, lightness and ease in the most complex of activities.

You can help your clients access this beautiful state during hypnosis by describing it to them, as I do when hypnotizing Sean in the videos. Or you may find it useful to explore times they’ve experienced it in the past, and reinvoke that feeling. You can also suggest that this delicious state of being will be triggered quite naturally by just engaging in that activity in future.

As for Sean, I think after winning the World Title he finally felt at peace. Although his sister was gone in a physical sense, he still felt so close to her even a decade later, and I know he wanted to reward the faith she’d always had in him. In a sense, he won that World Championship for her as much as for himself.

Dignity in motion, humility in action, flow, grace, and power. Sean amazes me.

You can watch both of my sessions with Sean inside Uncommon Practitioners TV. Read more about it here and join hundreds of therapists, counsellors, and coaches inside this unique online therapy resource.