Why willpower alone won't prevent relapse and what to use instead 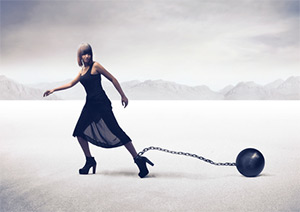 We need to help our clients feel their new positive behaviour is natural, rather than a constant effort

If you stretch an elastic band too far in one direction, the tension that builds up will try its damnedest to make the band ping back further the other way. And people do this, too…

Tell a teenage girl not to see her edgy but compelling boyfriend and she’ll want him even more.

Deny yourself the ‘treat’ of a cigarette, then watch yourself relapse – snap back into the habit – when the denial gets to be too much.

Trying not to smoke, not to call your toxic ex, or not to hurl those refined carbs down your throat are all very commendable, of course. But the problem with willpower is that it tends to be rather finite.

Researchers (1) have even found that using willpower in one place – biting your tongue around that impossibly irritating co-worker, perhaps – can weaken it elsewhere, so you may instead find yourself biting into that chocolate cake at the coffee shop after work.

The problem with willpower is that it tends to be rather finite.Click To Tweet

All the evidence does tell us that willpower can be strengthened with practice, so your will isn’t powerless! However, relying exclusively on willpower may not always be the way to go. It can be great for kickstarting things. We can willpower our way through those first steps out of smoking. But at some stage, it needs to feel natural not to smoke, rather than a constant effort.

As therapists, we can help our clients get to the natural bit straightaway (at least some of the time) by avoiding the elastic band effect as much as possible.

1. Separate the ‘behaviour’ from their ‘core identity’

Make it clear that who they are (identity) is quite distinct from what they do (the behaviour), but they are nonetheless fully responsible for the behaviour.

Rather than talking about your addiction, which implies that it is a central and immutable part of them, talk in terms of that behaviour. The word ‘that’ indicates it is separate from them, while the word ‘behaviour’ still implies responsibility.

It also helps to use terms that treat the problem as outside of them. Something ‘outside’ is easier to detach – something that may have even already detached from them. The battle with yourself isn’t quite so hard if what you’re fighting is not seen as something inside yourself.

So we might describe smoking as a ‘parasite’, something that tries to ‘con’ them into poisoning themselves. That gets the client to see the smoking, drinking, or toxic relationship as separate from who they fundamentally are.

Describing the compulsion with such unfamiliar analogies and metaphors also helps jolt people out of their habitual victim view of what’s going on (“I just can’t help it”).

If someone is trying to force you to do something you don’t want to do, it feels much less internally compelling and may even really put you off doing it. By describing the behaviour as external to them, something that is ‘bullying’ them, that they can ‘stand up to’, we are seeking to bypass the elastic band effect altogether.

2. Prepare them for the elastic band effect

We therapists don’t particularly like to appear negative (unless we are cunningly trying to help our contrary clients exercise their positivity), but sometimes forewarned really is forearmed. So I might start telling a woman how, even though she feels strong and determined right now, there might come a time when the old pull to get back with her abusive ex starts to feel strong:

It might be a time when you feel a bit tired… or bored… or lonely… when suddenly your head is full of biased memories of good times… blanking out the bad… and that urge to get in touch gets stronger… and then how are you going to let those promptings to contact him again know who’s boss?

In this way, we are preparing for the elastic band effect by acknowledging that it exists and can affect us. I will often hypnotically prepare a client by getting them to rehearse feeling pulled back towards a destructive behaviour, only to find the pull slackens again and gets less and less ‘taut’ over time.

We can reassure our clients they never have to think in terms of ‘never’. I might describe how we can be on a ten-mile walk and now and then retrace our steps a bit, but it doesn’t matter because generally we are moving forward.

To take pressure off, I might suggest to a smoker wanting to quit that they might have one or two more cigarettes here and there as the behaviour ‘peters out’ – or they might not, of course:

This makes the elastic band less taut and less likely to ping back uncontrollably into a full-blown relapse.

Of course, I don’t know for sure that I won’t be doing these things in ten years’ time, but the point is I don’t need to know, because it’s not what I do right now. And that’s all that matters!

Believe it or not, talking like this to someone who is overcoming a compulsion can be wonderfully reassuring. A destructive compulsion disappears not when we spend all our time pulling away from it, but when we put the ‘elastic band’ aside entirely and focus elsewhere.

For more ideas on how to break addictions, read about my online course How To Stop Anyone Smoking.

6 Things to Say to Motivate Smokers to Quit