How to use pattern interrupts to change problematic behaviour 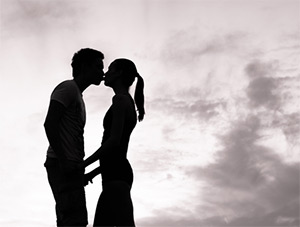 Sandy fired off her insults with all the pointless dedication of an old soldier firing at tourists, unaware that the war had ended thirty years before. (1)

Simon dodged and weaved, but every now and then his wife’s self esteem melting onslaught would land a painful blow.

They were here to solve their chronic, constant rowing.

“You never listen to me! Why do you always say that? All you care about is yourself and your stupid golf!”

Far from sitting back and taking this passively, Simon was keen to fire back at the enemy. Just as I sensed he was starting to load and aim his own weapon of vitriol at his wife, I interrupted.

“Simon, Sandy! Why do you two hate each other so much? Why don’t you just get a divorce?”

They were both stunned. It was Sandy who finally brought the unexpected but to my ears beautiful quiet to an end:

She seemed genuinely shocked. Then Simon spoke up and Sandy now listened:

“Yes, we love each other! Sometimes it does feel like hate, but I see that as the flip side of the intense feelings we have for one another. We’d never want to divorce… or at least, I wouldn’t.”

“We just thought you’d like to know the situation. You know… what needs working on.”

“Yes, thank you,” I said. “I think I’ve enough of an idea now, and I appreciate your demonstration. But it’s also important to demonstrate that you both have good words as well as terrible words to say about one another.

“We could sit here all day and up the hate, but really, I think we all three agree, we’re here to strengthen the love part of your relationship. Hate might be the flip side of love, as you say, but it can also strangle the life out of it. Do either of you want hate to win out over love?”

Simultaneously they chimed, “No!”

So we’d cleared the decks for the real work. You see, what they had demonstrated to me lies at the heart of why the capacity to pattern interrupt is such a vital skill for any therapist.

Man and woman as machines

“Men and women can be little more than machines. To get beyond ‘machine’ to the real self we must learn about the machine.”

So wrote the spiritual teacher G. I. Gurdjieff.

Of course, we don’t like to think of our behaviours and feelings as mechanical. There’s nothing self flattering in that thought. But it’s clear habit and repetition can make us more machine like.

Many emotional responses become ‘second nature’ purely because the responses have become ingrained and therefore automatic. Sandy and Simon’s bickering, I discovered as they calmly described the pattern of their disagreements, had become little more than a mechanised process.

He would give her ‘a certain look’ and – click, whirr, ching – a previously conditioned anger response would come whizzing back from her.

She would say a particular word to him and – click, whirr, clang – he would go into a rage.

Smoking, binging, all kinds of anxiety disorders, certainly addictions and, yes, even depression, can all become (if you’ll stay with me for a while on this metaphorical journey) mechanized. So how can we help couples who have become trapped in little more than ‘Pavlovian’ relationships?

Here are my 3 techniques that interrupt the pattern of arguments

These 3 techniques all use ‘pattern interrupts’ to change negative behaviour. Because just as negative habits can be formed, they can also be broken.

You saw me do it, didn’t you? Just now. I interrupted the marital gun fight, interrupted a whole battery of conditioned responses, with one sentence:

“Why do you hate each other so much?”

I followed this up with:

“Why don’t you just get a divorce?”

They were engaging in their over-practised emotional and behaviour argument pattern and I short circuited it. They had to go off automatic for a moment to make sense of something new happening in the ‘row ritual’.

That, in the moment, derailed the mean machinery. There are many ways to play devil’s advocate as a way to focus a client’s attention, but remember it needs to be done in such a way that it:

Playing devil’s advocate, like using ‘shock hypnosis‘, must be done with care. The seemingly insignificant devil’s advocate pattern interrupt I used here set the tone for the whole therapy:

“I think we all three agree, we’re here to strengthen the love part of your relationship.”

Of course, there were issues they needed to work on, but it had to be done within the context of making things better.

Pattern Interrupt Tip 2: Change something about the problem behaviour

Rather than trying to stop the problem behaviour happening, we can use a kind of paradoxical intervention when helping our clients grow beyond their dysfunctional behaviours.

I explained how couples who want to have a healthy relationship need to stick to the 5:1 rule. This means there needs to be 5 good interactions (great lovemaking, a shared movie, a fun chat, laughter) for every negative one (a row, a moody silence, put downs, sarcasm). I explained further how this rule has been scientifically studied and confirmed. Therefore they had a reason to listen to what I said next.

Simon and Sandy had both been singers when they were younger, and still liked to sing. I got their commitment to perform the following ‘song cycle’. I told them that every time they found themselves arguing, they must:

At the following session, they told me they had had “only” three major disagreements in the interval. And that each time they had ended up laughing uncontrollably, and on one occasion had “resorted” to enjoyable sex instead.

Which leads me, sort of, to tip three.

Pattern Interrupt Tip 3: Use hypnosis to re-evoke their love

Sandy and Simon did love one another deeply, underneath all the bickering and resentments. The shining glint of their love had been obscured, then all but buried, by their habitual, automatic and seemingly uncontrollable mutual hostility.

This in itself was a kind of pattern interrupt. Because they tended to squabble about relatively minor stuff (no affairs or domestic abuse) then being regularly reminded of the love they did genuinely have would certainly help to serve as an interrupt to the automaticity of their arguing.

I hypnotically re-evoked the first stirrings of their attraction and love for each other, the times they had faced together, the times when they had felt as one. I could see it was having profound effects as they both smiled touchingly. I encouraged them both to dwell for a time on their own and each other’s mortality, on the thought that, one day, they wouldn’t be here.

I then got them both to hypnotically rehearse arguing but with a background sense of love and appreciation. In this way they would no longer be seduced by the arguing but have a sense of its relative smallness in the whole story of their love. I also asked them to hypnotically re-evoke feelings of strong love for one another on a weekly basis.

Not the be all and end all

Sandy and Simon were not a couple who enjoyed their bickering. It wasn’t exciting for them, it didn’t lend a frisson to their relationship. They were both exhausted through it. They decided to keep a little of the symptom, a bit of bickering is reasonable.

Of course, pattern interrupt as a therapeutic strategy isn’t the ‘be all and end all’, the only thing you need do (although sometimes it might be) to help a relationship. But it can be enough to loosen up the disabling strictures of mechanical conditioning so that people can start to find another, freer way to live, because it’s so true, as the cliché has it:

The upshot for this couple was that they argued less. And when they did argue it was much, as they put it, “milder”. They made love more (often arguments would lapse into lovemaking!) and could now live their love for one another as fully as they were meant to all along.

(1) A bit like this chap: The soldier who refused to surrender.